On a day when the elite of the hockey world and Canadian politics turned out to honour Jean Beliveau, it was another Montreal Canadiens star who summed it up best.

"O captain, my captain, bon voyage," said Yvan Cournoyer, borrowing from poet Walt Whitman in a tearful eulogy to one of the most beloved and respected captains in Canadiens history.

Beliveau, who died Dec. 2 at 83, was more than an exceptional player who led Montreal to 10 Stanley Cups in a 20-year career from 1950 to 1971, and earned another seven as an administrator. No one has their name on the Cup more than Beliveau.

Mostly, he is remembered as the ideal team captain and a man who carried himself with class and graciousness in everything he did.

Cournoyer was among five speakers along with Dickie Moore, Serge Savard, Ken Dryden and team owner and president Geoff Molson at an emotional funeral Wednesday at Mary Queen of the World cathedral.

The pews were packed with past and current players as well as other celebrities and a few hundred fans who braved a blizzard to pay their respects.

Moore, Savard, Dryden, Cournoyer and Frank Mahovlich were among dozens of Canadiens alumni on hand, along with all of the current team's players and coaches. Cournoyer and Savard were pallbearers along with ex-Canadiens Phil Goyette, Guy Lafleur, Robert Rousseau and Jean-Guy Talbot.

Harper described Beliveau as someone who transcended his sport.

"We've obviously lost a great citizen, somebody who was admired and respected by everybody everywhere in the country," he said on his way into the service. "I certainly have admired Mr. Beliveau since I was a young boy.

"He was an individual who was great in his sport but ultimately even greater than his sport."

The pallbearers wheeled in the coffin draped in Canadiens red, white and blue ahead of Beliveau's widow Elise, his daughter Helene, granddaughters Magalie and Mylene and other family members.

Then came a company's worth of alumni, followed by the current team, who are well aware of the Beliveau aura.

"It shows you how big of a deal it is," he said. "A lot of people on the current team, we weren't able to watch Jean Beliveau play, but we definitely know about the legend and it's our job to make sure that what he's accomplished and what he's built here in Montreal lives on."

There has been talk of renaming the Conn Smythe Trophy after Beliveau, the first player to win the award for the most valuable player in the NHL playoffs.

Bettman said the league may eventually consider it or some other honour.

"We've been focused more on his passing and that loss and celebrating his life and I know at the appropriate time we'll focus on what is a remembrance fitting for someone like Jean Beliveau," Bettman said. "He's going to be terribly missed."

Cournoyer may have been the most emotional of the speakers at the service as he spoke of joining the Canadiens in the 1960s when Beliveau was in his 10-year run as captain. They had dressing room stalls next to each other, and were roommates on road trips.

"Given the age difference between us, we developed almost a father-son relationship," Cournoyer said.

"I was lucky to have been with Jean for many glorious years with the Canadiens, lucky to share amazing moments together, lucky to have him as a friend," said Moore.

"Would you rather be good or lucky? I was lucky. He was good," he said to laughs from the congregation.

Dryden, a rookie in Beliveau's last season, said: "He treated everyone with respect. He said the right things and in the right way, in French and in English, because that's what he believed and that's what he was.

Savard recalled how happy he was to end up a teammate of his boyhood idol.

"Jean was a great leader," said Savard, who was general manager for two Stanley Cups after his playing days. "We would look toward him when times were difficult.

"After just a few (NHL) seasons, his peers named him captain. Surprised and shaken up, he went to see Mr. (Frank) Selke to turn down the captaincy. Mr. Selke told him he was the choice of the players and to return to the dressing room to fulfil his role as leader.

"And he did that throughout his career, winning 10 Stanley Cups and helping us be better players and better people, on and off the ice. You couldn't disappoint such a role model."

The giant Canadiens flag that draped Beliveau's coffin was folded carefully and given to Elise, who has become a celebrity herself as she dealt with the public with class and remarkable strength since her husband's death.

In two days of public visitations at the Bell Centre this week, she greeted and accepted condolences from the thousands of fans who streamed in.

Her delight at the Canadiens' 3-1 victory over the Vancouver Canucks on Tuesday night seemed to break the tension for a while. She looked calm and at peace at the funeral mass.

A few hundred seats were reserved for fans on a first come, first served basis. Those who couldn't get inside the church were able to watch the ceremony on giant screens outside.

Montreal police, who have been wearing camouflage pants and red ballcaps in recent months to protest pension plan reforms, wore their regulation uniforms out of respect for Beliveau, who entered the Hockey Hall of Fame the year after his retirement in 1971.

"He was a special man," Molson said in his eulogy. "A Jean Beliveau like no other." 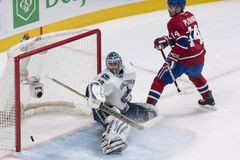 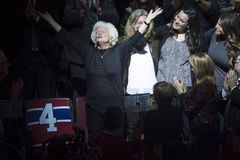 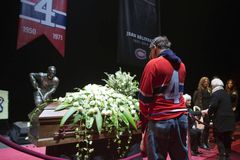 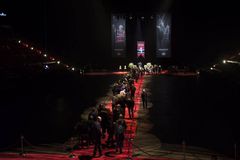 Jean Béliveau should be remembered for his class on and off the ice
December 3, 2014 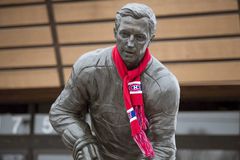 Jean Béliveau to be mourned in a funeral befitting the gentleman he was
December 3, 2014 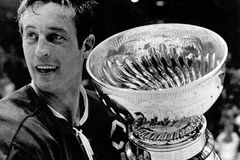