In his 23 years as NHL commissioner, Gary Bettman's primary strength has always been his ability to sell things – broadcasting rights and expansion franchises, new rules and licensed products.

It's how the NHL has grown its revenues tenfold since he took over – from a cottage-sized industry to a bulging $4-billion entity.

Bettman was in town Monday, stumping on behalf of CalgaryNEXT, the Calgary Flames' vision of how the city should redevelop the western edge of its downtown core. Playing on the rivalry between Calgary and its northern neighbour, Bettman suggested that if Edmonton could get a "visionary" new arena project approved via a private-public partnership, then Calgary should be able to manage it as well.

Bettman made these remarks on Monday to the Chamber of Commerce in Calgary, where he was guaranteed a mostly receptive audience from the local business community.

The harder sell will be convincing mayor Naheed Nenshi and the 14 councillors who will ultimately decide whether the city will help finance the ambitious $890-million project. It would include new arenas for the NHL Flames and the CFL Stampeders, and a multiuse fieldhouse (a project that has already been given the green light by city council, but is currently scheduled to be built out by McMahon Stadium).

Bettman disputed the notion that the project would be a form of corporate welfare, arguing "that is a view not based on a realistic assessment of the important infrastructure and economic benefits that facilities bring to a community."

As proof, Bettman cited multiple examples from within his own league, including the revitalization of downtown Los Angeles, where the L.A. Live entertainment district that arose around the Staples Centre spurred on new housing and hotel projects, all of which turned one of the worst sections of the city into a desirable destination.

"These facilities are anchoring urban change and progress all over North America," Bettman said.

One of the major problems with Calgary's proposed West Village site is that it needs an environmental remediation to clean up the creosote left behind when the Canada Creosote plant closed in 1962.

Figuring who pays for the clean-up and how much it will cost is one of the major unknowns the project faces. So far, the mayor has been non-committal as he waits for the results of a study into the cost of remediating the site. "Public money must be for the public benefit," he said in response to reporters' questions recently. "Does this project meet the test?"

Bettman and Ken King, CEO of Calgary Sports and Entertainment Corp. (CSEC), are scheduled to meet Tuesday with the city manager and other civic officials to discuss the project. Bettman said he'd asked to meet with Nenshi, but was told the mayor had a scheduling conflict and couldn't attend.

"This doesn't get done without the government of the city of Calgary … identifying this as a priority and moving it forward," said Bettman, who estimated it would take up to five years for the remediation and construction of the project to be completed.

City staff have been reviewing the pros and cons of the CalgaryNEXT project and expects to have a report on its viability completed by the end of April.

Once new arenas are completed in both Edmonton and Detroit, the Saddledome – built in 1983 and host arena for hockey and figure skating at the 1988 Winter Olympics – will be the oldest building in the league.

"If your attitude is this has to be all [privately financed], it's not going to get done – because it's not an investment that's cost-justified," said Bettman. "What you need is an understanding of how these projects can generate revenue that not only pay for themselves, but spur other economic activity that can make a city stronger."

Flames, Stamps to Calgary: Our arena needs your money
August 19, 2015 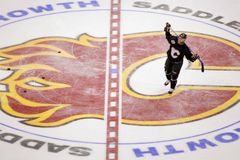 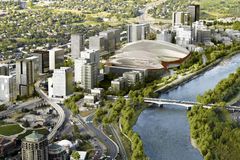 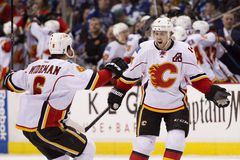