Entire philosophical tracts have been built around the concept of perception, the point being it's not a simple subject.

Take the varying observations from an event that occurred 7:40 into the Montreal Canadiens' tilt with the Winnipeg Jets on Tuesday night.

The official NHL play-by-play describes it as a saved Evander Kane wrist shot from 13 feet in front of Carey Price – eliding the fact it came on a long breakaway that quickly morphed into a two-on-zero rush.

Habs defenceman Mike Weaver was watching from the bench and said this: "Every time a guy's coming down on (Price) you're just assuming he's going to save the puck. It's just one of those things. He's the best in the game."

Contrast that with the goalie's perspective.

"I saw it kind of develop; he had some help on the play. I didn't want to cheat too much to the middle but I gave him a little extra room on the blocker side. Kinda guessed it a little bit," Price said after the game, quickly adding "anticipated would be a better word. I just got a pretty good piece of it. Got lucky a little bit."

So which is it: guesser or genius?

In a 3-0 victory Price recorded his ninth win of the season – a 29-save shutout, his first of the year – and was lavishly praised afterward by his teammates for winning almost single-handedly.

It's true he played brilliantly, and that the Kane stop and another shortly afterward on a Mark Scheifele breakaway helped tilt the ice in favour of the home team, none of which alters the fact he was also lucky.

The Jets found the goalposts on at least a couple of occasions, and a Kane was denied an absolute sitter in front of a yawning net by Andrei Markov's flailing stick on a last-gasp power play in the waning moments of the third.

They missed at least two other open chances during the advantage.

Asked when he started thinking he had a shot at blanking the Jets, Price said "probably not until the offensive draw at the end of the game."

The Habs are now 11-4-1 and have won three straight since snapping a three-game losing skid last week in Buffalo.

Still, what may look like an emerging Eastern Conference power from the outside is still considered a work in progress inside the room.

Why else would the Habs dispense with two more veterans this week – first Rene Bourque was sent packing to the minors, then Travis Moen was traded to Dallas for 40-year-old defenceman Sergei Gonchar – as they try to solidify the club?

There is a transition operating in this team, and thus there is plenty yet to be done as young players take on veteran roles.

"We've lost something like 3,000 games worth of experience since last year . . . we realized at the beginning of the season we might take one step forward and two steps back, but we had a good camp, and we've had some success in the early part of the season," said coach Michel Therrien, later adding "it's still not perfect, but we're moving forward, and that's what I like."

The bald fact is Tuesday's game was the first this season where the Habs built a lead and held it to the end against the luckless Jets.

Therrien said his team lost its defensive structure on a Western road swing – he said the club is still working its way through some system changes introduced in training camp – but that it's back to playing its familiar style.

Tinkering with the lines has surely helped – the recently-combined unit of Jiri Sekac, Lars Eller and Brandon Prust accounted for the game's winning goal, and have looked explosive in two straight games.

Eller, in particular, looks like a brand new player alongside the speedy, skillful Sekac, who is crafty enough to confound lesser NHL defencemen, and big enough to hold off powerful ones.

Eller scored the opening goal early in the second period, Alex Galchenyuk and Tomas Plekanec chipped in third-period goals to salt away the win.

An adjustment in the defensive pairings also appears to have paid dividends, on the face of it at least.

Having Gonchar on board will likely result in more fiddling on the blueline – although general manager Marc Bergevin's claim on Tuesday that third-year pro Nathan Beaulieu "needs to get better" was belied by a strong showing against the Jets (there's that perception thing again).

It might be that Therrien will consider splitting up Markov and P.K. Subban, who each had their struggles – Subban's were perhaps more glaring, his giveaways led to a pair of opposing breakaways, even if he created at least as many top-grade scoring chances for his club.

A tag has long been applied to Subban that he's too risky a player defensively (which is empirically false) but if the eyes are to be believed, his apparent desire to play a more cautious game may in fact be making things worse for a player who above all else is instinctive.

Similarly, Tom Gilbert often looks like the steady puck-moving presence the Habs have been looking for on the right side, but his lack of aggressive physicality has a tendency to leap out, as does Weaver's ponderousness.

While we're on the subject, is Alexei Emelin in the midst of a rough patch or is his ceiling as a third-pair guy prone to wandering far afield to deliver hits of dubious value?

As the schedule grinds toward the quarter pole, the immediate answer to the fundamental question – just how good is this team? – is narrowing into focus.

Which only leads down another avenue of enquiry: how accurate is the perception of what this club can do, and will it endure? 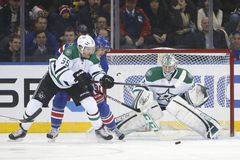 Habs lean on Price to cool off streaking Jets
November 11, 2014 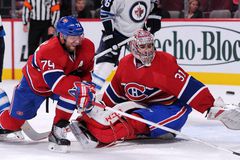 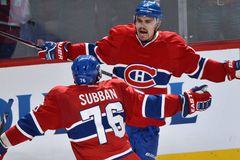