Credibility has been in short supply with the Calgary Flames these past six months – what with the NHL team botching the free-agent signing of Ryan O'Reilly and then badly bungling the trade of captain Jarome Iginla at the deadline.

But credibility of a kind was restored Thursday, when Brian Burke, the former Toronto Maple Leafs, Vancouver Canucks and Anaheim Ducks general manager, was unveiled as the Flames' new president of hockey operations.

Now, Burke is no saviour – as some disenchanted Leafs fans will surely note – and he can be a polarizing figure wherever he opens his mouth – which is going to happen less often, he says. However, within the NHL and especially within the larger industry of hockey, Burke has a stature and prominence the Flames can really use right now.

Any team in the early stages of a rebuild cannot be a laughing stock, which is what the Flames were in the spring, as they muddled to a grim 13th-place finish in the Western Conference.

Ultimately, a team needs to be a destination for free agents, not an organization they shun or dismiss as irrelevant. It wasn't always that way in Calgary either, but it is today – a franchise that can only coax free agents north by offering too much money and has had little success in recruiting from the ultra-competitive U.S. college free-agent ranks.

Burke will help turn the tables there. In the Flames' new chain of command, he will report to team president Ken King, and general manager Jay Feaster will report to Burke.

Above all else, Burke can be a convincing salesman, and he struck all the right notes at his introductory press conference Thursday. He was a far more restrained than when he first arrived in Toronto in 2008, a nod to experience maybe and the realization that this, while a passionate hockey market, is also quite a different hockey market.

"I told Ken this in one of the interviews, 'I think in a prior life I lived in Alberta,'" Burke said. "People speak plainly here. They respect honesty. They work hard. These are all things that are core values for me. I worried less about fitting in in Calgary than I am anywhere I've ever worked. I respect how people do things here."

That sentiment will play well in Calgary, where Burke's no-nonsense, straight-ahead approach will resonate in the business community, which is also the foundation of the Flames thus-far ultra-loyal season-ticket base.

Traditionally, Burke's message is all about winning in the here-and-now as opposed to winning soon or winning some day. Accordingly, his patience will be put to the test in the dark days of winter, when the Flames fade to black.

But Burke said he understands that, in a salary-cap era, there are no quick fixes and referenced a conversation he had with former Boston Bruins GM Harry Sinden when he was just starting in the business. Burke said he called Sinden to complain about his team and Sinden advised him, "Whenever you take over a non-playoff team, you inherit a leaky ship."

"That was his term," Burke said. "I think fans can be patient as long as they see a plan that's in place and being executed and faithfully stuck to. I think fans understand that and they will buy into a plan like that. I think where they lose patience is when they don't see a plan. I think there's a plan here and fans can see it."

No matter what they may say publicly, deep down, the Flames know they are destined for a least a couple of years of cellar-dwelling – and really the big hope is that two years from now, they bottom out and are rewarded with the draft rights to Connor McDavid, a generational prospect now playing for the Erie Otters of the OHL.

For decades now, most of the generational prospects in the game have landed in the United States, but the Flames are so low on proven NHL talent that – the draft lottery notwithstanding – they could be in the running for McDavid, no matter how quickly their young prospects develop.

Burke did a lot of things right in his previous incarnations as an NHL GM, beginning in his Hartford Whalers days, when he was able to trade up in the draft to land six-time all-star Chris Pronger. He brought the Sedin twins to Vancouver and, in Anaheim, where he won his one-and-only Stanley Cup, it was the ability to add Pronger and Scott Niedermayer to the team's defence corps that ultimately pushed the Ducks over the top.

The Flames' new front-office structure is decidedly non-traditional by NHL standards, but more and more teams are moving towards it, including the Colorado Avalanche, which has its own three-headed management team (Joe Sakic, Patrick Roy and Greg Sherman). The Edmonton Oilers are like that, too – with Burke's old friend, Kevin Lowe, the president of hockey operations and Craig MacTavish the GM.

Burke and Lowe have had issues since Lowe poached away Dustin Penner as a free agent when Burke was running the Ducks. Their sniping got so entertaining eventually NHL commissioner Gary Bettman stepped in and told them to tone it down.

"They've gone a certain path and we've taken a different path," Burke said of the Oilers' rebuilding strategy. "I hope [the Burke/Lowe rivalry] reignites the Battle of Alberta. It's not all bad."

No, in time, it may get very good again. That, at least, is the hope in a province that practically ruled the NHL in the 1980s, but has seen a lot of lean years since then. 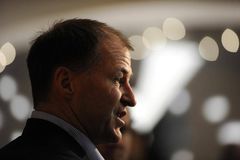 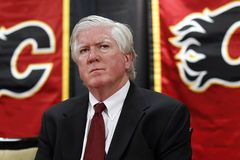 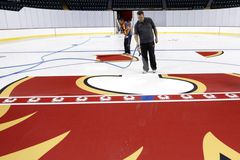