Here is what's so patently unfair about the NHL justice system: There isn't any punishment the league's department of player safety can dole out to the Minnesota Wild's Matt Cooke that would compensate the Colorado Avalanche for the loss of Tyson Barrie, their most gifted offensive defenceman.

Cooke, the long-time NHL head hunter who'd mostly cleaned up his act after joining the Wild, reverted to his old ways Monday night in the third game of the Minnesota-Colorado playoff series, tossing out a knee at Barrie early in the second period of a game that would finish as a 1-0 overtime win for the home team.

Barrie didn't return and after the game, Colorado coach Patrick Roy revealed that he'd suffered a medial collateral ligament tear and would miss four-to-six weeks. Translation: He's done for the playoffs, unless the Avalanche can somehow go all the way and he might get back for a game or two at the end.

But it seems unlikely that Colorado can win without such a significant part, a young player that blossomed into the second half and provided an offensive dimension to a kind of no-name defence that seemed greater than the sum of its individual parts. Colorado, as a whole, is a bit like that – talented, but getting timely contributions from occasionally unlikely sources.

The Avs are already muddling along without No. 1 centre Matt Duchene and while his absence wasn't acutely felt in the first two games, as the Nathan McKinnon-Gabriel Landeskog-Paul Stastny line scored at will, they surely could have used his ability to make something out of nothing in the low-scoring third game, where everything reverted to the norm in the low-scoring NHL, with rookie Wild goaltender Darcy Kuemper playing great in his playoff debut, his Colorado counterpart Semyon Varlamov matching him save for save until the overtime.

Late Monday night, Cooke was offered the option of an in-person hearing to discuss the play on Barrie, which is what the NHL's player safety department does whenever it considers a suspension of five games or more. Cooke could opt to go to New York or make his case over the telephone.

With a maximum of four games to go in the series, it is unlikely he'll play again against the Avs and Minnesota can easily slip another bottom-six forward into the lineup. Colorado doesn't have the luxury of dropping a comparable talent into its line-up to replace Barrie. His absence will be keenly felt, possibly undermine their chances to win the series - and there's not a thing they can do about it. Matt Cooke - at it again. Great.

Maybe old dogs can learn new tricks for a time, but presumably they can't help falling back into old patterns. Cooke has been suspended six times previously for a total of 25 games. When dealing with supplementary discipline, the injury matters. The history of the offender matters too.

Time for the new, post-Brendan Shanahan disciplinary committee to lower the boom on Cooke in a big, meaningful way. It won't help Colorado, but it might send a message early in these playoffs that they're serious about protecting the players from the sort of indiscriminate cheap shots that could go a long way in determining the outcome of these series. 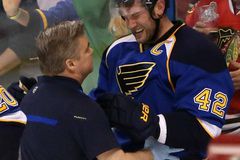 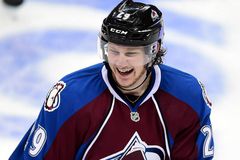