The first game of the NHL playoffs turned into a night when some goaltenders with big question marks above them supplied definitive answers.

Marc-Andre Fleury and Carey Price were the most notable of the group as each man was subject to finger-pointing in years past because of their teams' untimely exit from the playoffs. Anaheim Ducks rookie Frederik Andersen did not have to face the Dallas Stars with that weight around his neck. But Andersen still had his doubters when head coach Bruce Boudreau elected to start the 24-year-old Dane over veteran Jonas Hiller, who faltered at the end of the regular season.

All three men silenced the critics Wednesday night. Fleury stepped up in the Pittsburgh Penguins' come-from-behind 4-3 win over the raw but determined Columbus Blue Jackets. Price was there when needed in the Montreal Canadiens' 5-4 overtime win over the Tampa Bay Lightning and Andersen helped the Ducks hang on to edge the Stars 4-3.

There was more than an element of Gerry Cheevers to the games of all three goaltenders. Someone once wrote of the old Boston Bruins battler of the late 1960s and early 1970s that Cheevers would look up from his cigar and Racing Form midway through the third period, notice his teammates were leading 6-4 and slam the door shut.

And so it went Thursday. Fleury, Price and Andersen could all be questioned for at least one of the goals they surrendered but when crunch time came all three made the necessary big saves.

This was especially important for Fleury, whose meltdowns in the postseason since his spectacular work in leading the Penguins to the 2009 Stanley Cup made his position increasingly tenuous. Tomas Vokoun had to take over in the 2013 playoffs and recovered from the season-long effects of a blood clot in time to take up a foreboding presence in the Penguins dressing room this week.

However, after Fleury's 31 saves against the Blue Jackets, whose feisty performance gave the Penguins fits, it looks like Vokoun will remain a healthy scratch this spring. Columbus did crash and bang its way to a 3-1 lead but that was due mostly to the mistakes of Fleury's teammates.

After the Penguins righted themselves with a couple of quick goals from their explosive power play, Fleury gave them some memories from 2009. He made two big saves at close range in the last minute of the second period with the score tied 3-3 and another late in the third when the Penguins were protecting their one-goal lead. That one produced something else that had not been seen much since 2009: chants of "Fleury, Fleury," from the Pittsburgh fans.

"Very big," Sidney Crosby said of Fleury's performance. "We made some big mistakes. He had to bail us out a few times. But you don't win the playoffs without goaltending like that."

Price's solid work in Team Canada's gold-medal effort at the Sochi Olympics in February eased the anxiety somewhat over his comportment in big games. But before the Canadiens-Lightning series opened, there were lots of mentions of Price's struggles a year ago in the Habs' first-round loss to the Ottawa Senators.

Those looking only at the statistics from Thursday's Montreal win would have the same questions. Price allowed four goals on Tampa's first 16 shots while his teammates fired 44 at Lightning backup goaltender Anders Lindback, who stood up well in place of the injured Ben Bishop. But it was a wild back-and-forth game when defence was thrown to the wind. It seemed almost all of the Bolts' shots came on odd-man rushes or other great chances.

In overtime, though, Price played, in the famous words of that loquacious old goalie Arturs Irbe, "like wall."

By comparison, Andersen had it easy in the early stages of his playoff debut. The Ducks got him a 4-0 lead midway through the game. Then the Stars started chipping away and it was 4-3 with a little more than six minutes left in the third period.

That was as far as it went. Andersen made several big saves to preserve both the win and his spot as the Ducks' new No. 1 goaltender.

The possession game: He who holds the puck raises the Cup
April 16, 2014 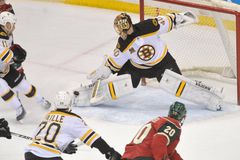 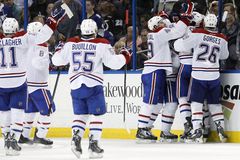