In the roller-coaster ride that is the chase for an NHL franchise, Quebec City's car is nearing a peak.

The interesting part is that Arizona Coyotes owners Andrew Barroway and Anthony LeBlanc, along with NHL commissioner Gary Bettman, are now driving that car. And, not to belabour the roller-coaster metaphor, they were handed the keys by Glendale city council.

When Glendale council voted 5-2 earlier this week to authorize the suburban city to terminate the arena lease with the Coyotes, which paid the team $15-million (all currency U.S.) a year for the next 13 years, the politicians gave Barroway and LeBlanc a potential windfall of hundreds of millions of dollars. If, as the city promised, it follows through on ending the lease, the Coyotes will be free to move and negotiate with a lineup of suitor cities and potential owners, thereby driving the value of a franchise LeBlanc and a largely Canadian group of investors bought from the NHL for $175-million to well north of $400-million.

Under the terms of the soon-to-be-terminated lease, the Coyotes would have to wait three more years and prove a total of $50-million in losses (not a problem since they hit $34-million in the first year) before an escape clause kicks in. Gee, thanks, Glendale.

This time around in the endless saga of the financially crippled club, there are several options for the Coyotes and Bettman. None of them are perfect, but most are at least doable. There are even enough of them that the NHL could potentially move the Coyotes and still preserve cities such as Las Vegas and Seattle for the fat expansion fees of $400-million-plus as opposed to a much smaller relocation fee. The best option is Quebec City, where a new arena will open in September. That will not solve the imbalance of teams between the Eastern and Western Conferences, although it may not be as big a problem as the NHL lets on.

Other possibilities are Houston, Kansas City and, admittedly a long shot, the Greater Toronto Area where, as Jim Balsillie once hoped, the team could play in Hamilton while an arena is built. Another intriguing long-shot scenario is down the road from Glendale in downtown Phoenix or Scottsdale, where Robert Carver, owner of the NBA's Phoenix Suns, wants a new arena.

Students of the Coyotes drama know the original problem was the team's move to far-flung Glendale, the opposite side of the valley from its original well-heeled luxury-box owners and season subscribers who mostly lived in tony Scottsdale.

Do not get caught up in the bluster from LeBlanc that the club's lawyers are taking steps to keep the lease in effect and sue Glendale for $200-million in damages. That is the preferred public stance while the Coyotes owners and Bettman confer about their legal strategy over the next few months. A smart owner would simultaneously throw open his back door and quietly entertain offers from interested cities and owners.

Also, the legal grounds for Glendale's move are almost beside the point as well. The city appears to be on solid legal ground since Arizona law allows a government body to terminate a deal if an employee who helped draft the contract takes a job with the other party. This concerns former Glendale city lawyer Craig Tindall, who helped draw up an arena lease with one-time Coyotes suitor Greg Jamison, which was used to write the eventual contract with LeBlanc and company. After he left the city's employ, Tindall went to work for the Coyotes.

However, what really matters here is that Glendale council gave the Coyotes an out – undoubtedly because the city of 260,000 simply cannot afford to keep paying the $15-million – at a time when there are now other cities available. Even more important, according to an NHL governor who requested not to be identified because he is not allowed to discuss league business publicly, Glendale council burned a most important bridge.

No one, the governor said, worked harder than Bettman to keep the Coyotes in Glendale for the past decade. This may have had more to do with NHL broadcast and marketing contracts keeping a major television market such as Phoenix in the fold than love for Glendale, but Bettman fought hard. Now, given his remarks following the council decision, the commissioner is most unhappy with the city. Maybe unhappy enough to let Barroway and LeBlanc hit the jackpot by selling or moving the team.

But even if Bettman isn't keen on a move, he may have no choice. If the Coyotes owners are brave enough to tangle with Bettman, they certainly have a strong argument that the league cannot legally bar a move because they were kicked out of their home through no fault of their own. 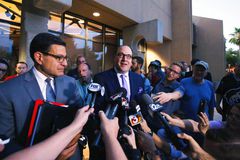 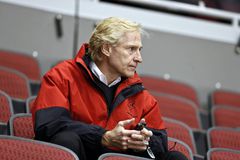 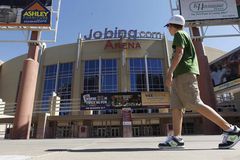 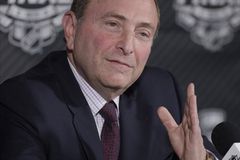