There was a racket upstairs. And the baby was missing.

When Theresa Reinhart heard the shouts of "Shoot! Shoot!" she had an inkling of what was going on. Her two boys, four-year-old Max and two-year-old Griffin, had found a good use for their baby brother, Sam, hauling the infant in his small car seat upstairs to employ the kid as goaltender in the playroom.

The field of play at the Reinharts' home in West Vancouver was expansive, varied, and constant. The boys played every sport and invented contests along the way, the more physical the better, one memorable game dubbed slamball, involving basketball and a trampoline.

"There was a lot of testosterone," former NHL star Paul Reinhart remembered on Sunday, Father's Day, his wife and boys gathered on their home's patio in the late morning. "They found games to play constantly."

But the Reinhart boys, while they loved soccer and tennis, were born with hockey in the blood, sons of Paul, the flying and scoring Calgary Flames defenceman in the 1980s who finished his career in Vancouver with the Canucks, retiring early because of a back injury. And Theresa's family was sporty, too. She competed in badminton and volleyball, her mom was a ski racer, and her dad played U.S. college football at the University of Oklahoma.

The stew, from genes to the competitive arena of the Reinhart home, produced a Sutter – or Staal-like brood of brothers.

On Friday night in Pittsburgh at the NHL entry draft, Griffin (now 18 and 6 foot 4) could be a top-10 pick, analysts say. If that is where the young defenceman is drafted, he will top his dad, who was picked No. 12 overall by the Atlanta Flames in 1979.

"We didn't push them into hockey," Paul said. "They arrived in hockey just because I think they're naturally Canadian kids."

Griffin is the second Reinhart son to skate toward the NHL. Two years ago, the eldest, Max, was picked by Calgary in the third-round and aims to make the team next season.

The baby, Sam, now 16, could be another first-rounder in two years, after lighting up the Western Hockey League last winter, notching nearly a point a game, on average.

While it's often a long way from the draft to NHL ice, the Reinharts have already booked solid success. All three have played in the Memorial Cup, Max and Sam with the Kootenay Ice in 2011 and Griffin with the Edmonton Oil Kings this year.

There is a long history of fathers and sons – and brothers – in the NHL. Among the greats: Bobby Hull, brother Dennis and Bobby's son Brett, Gordie Howe and sons Mark and Marty. There are the Sutters, all half-dozen of them, whose current equivalent is the quartet of Staals. Twins Henrik and Daniel Sedin of the Vancouver Canucks fit the category. Off the ice, but in the arena, Scotty Bowman's son Stan is general manager of the Chicago Blackhawks.

When Paul went No. 12 in 1979, the draft was in August, held late as the NHL absorbed the World Hockey Association. There was no prime-time show on TSN, as there is now. Paul was trying out for the Canadian Olympic team in Calgary and was called off the ice. Cliff Fletcher, the Flames GM, was on the phone with news. Paul hardly knew where Atlanta was.

Griffin, a defenceman like his dad, has managed through a far-greater crush of attention, from detailed scouting to media, but has been helped by such peers as Oil Kings teammate Keegan Lowe, who was drafted last year and is the son of Kevin Lowe, the former Edmonton Oilers defenceman and the club's current president of hockey operations.

The Reinharts set off as a family for Pittsburgh on Wednesday.

"I'm just excited," Griffin said. "I'm not really going in with expectations. I'm just going to have fun with it."

Fletcher, a special adviser to the Toronto Maple Leafs, has seen Max and Sam play live – and was immediately struck by their talent.

"I do believe in blood lines," Fletcher said. "If it wasn't for Paul's back, he would have had a Hall of Fame career."

While bloodlines have always flowed, it seems ever-more common. Max's draft by the Flames in 2010 is one example, when Calgary also chose John Ramage, son of Rob Ramage, with the Flames not only choosing two sons but sons of two fathers who both played as Flames.

This year, including Griffin, numerous sons could be chosen in the draft, with yet another Sutter among the bunch, Lukas, son of Rich, and the fifth second-generation Sutter to be drafted.

"The last four, five drafts, it's amazing how many young guys have been drafted, whose fathers I either played against, or played with, or knew of," said Archie Henderson, a long-time NHL scout who played for about a decade, mostly in the minors.

At the start of each season, scouts always scan for recognizable names. NHL pedigree hardly guarantees passage to the pros but it does mean teenagers on the ice have a father who knows what it takes.

"Scouts don't think, 'He'll be his father,'" Henderson said. "You scout the player. But you do inevitably think about the bloodlines." 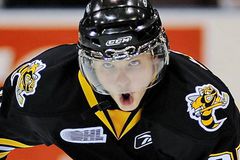 Reinhart buys rest of Ravens' shares
September 17, 2002
Follow David Ebner on Twitter @davidebner
Report an error Editorial code of conduct
Due to technical reasons, we have temporarily removed commenting from our articles. We hope to have this fixed soon. Thank you for your patience. If you are looking to give feedback on our new site, please send it along to feedback@globeandmail.com. If you want to write a letter to the editor, please forward to letters@globeandmail.com.
Comments