Revenue sharing is a prickly subject in Canada.

After all, it only came into the NHL beginning in 2005-06, when the Canadian dollar had already jumped up to 85 cents and revenues were starting to explode for the six (now seven) teams in this country.

And that meant having to pay into revenue sharing.

Fast forward six years, and the Canadian teams haven't just been paying into revenue sharing, they've been paying a lot. The Toronto Maple Leafs lead the way with $20-million into the communal kitty in 2011-12 alone (in another non-playoff year) but Montreal and Vancouver were also among the league's top four revenue generators and sharers.

There was even a year or two under the last CBA where the Edmonton Oilers (!) paid into revenue sharing. (The mighty Winnipeg Jets and their 15,000-seat rink weren't even able to receive payments last season because they made too much money.)

Then there's the other end of the equation, and in a half dozen American cities, it isn't pretty. The best example of revenue sharing excess I always like to point to is that, according to the team's own bankruptcy documents, in 2008-09 the Phoenix Coyotes received more in revenue sharing ($13.5-million) than they generated in ticket revenue ($13.3-million).

Which is worthy of another (!).

All of this is especially relevant right now because in these in-depth talks between the league and the NHLPA this week in New York, revenue sharing has been a major topic of conversation.

Union head Don Fehr is a huge proponent of it. He loves revenue sharing and part of his endgame here is pushing the NHL to have much more of it.

Fehr's demands are why, in baseball, even the richest of the rich teams are putting 31 per cent of their locally generated revenues into revenue sharing.

Compare that with the NHL sharing a piddly $150-million of its $3.3-billion (4.5 per cent) revenues last season.

That's not entirely an apples and oranges comparison, obviously, as baseball has huge centrally generated revenues and a much, much bigger overall pie. But you get the idea.

The NHLPA isn't asking for a baseball model, exactly, as in their last offer, they had roughly $260-million in sharing on the table, which is more than a 70 per cent increase from where it is currently. The league, meanwhile, has been willing to go as far as $200-million (a 33 per cent increase) and wipe out restrictions such as teams in large markets (Anaheim, the Islanders, Dallas, etc.) being ineligible.

Now that $60-million difference may not sound like much, but it is and there are two reasons for that.

No. 1, the NHLPA essentially wants to give all of that $60-million to six teams in addition to the other sharing those clubs would already be getting. I'm told that some of the discussions in this area to date have centred directly on the six franchises that have had the lowest revenues in the league (and highest losses) for four years in a row: Phoenix, the Islanders, Columbus, Florida, Nashville and Carolina.

I'll get into the rational behind helping those clubs in particular in a minute.

No. 2 is all about where the money comes from.

If you look at the details of the NHL's last proposal, it spells out that "at least 50% of the revenue sharing pool will be funded by the Top 10 revenue grossing teams."

What's interesting is that it then goes onto say that "the remainder of the revenue sharing pool will be funded from league- and playoff-generated revenues," which is similar to how this part of the agreement functioned in the last CBA.

What the players' side doesn't like about this is that you run into a situation where a team like Phoenix, which loses a bundle, has to contribute more and more money to the revenue sharing pool when it does well on the ice.

That trip to the conference finals, in other words, doesn't help the Coyotes nearly as much as it potentially could. It almost creates a weird disincentive to be successful.

(Obviously winning and going deep in the playoffs still helps, but how odd is it for a basket case franchise owned by the league to be paying some of its playoff gates into revenue sharing, which then comes back to it later? Pretty odd.)

How would this be fixed? Well what Fehr is arguing in those meetings this week is that all that new money to the owners that's generated by cutting the players' share from 57 to 50 per cent should be used on this program.

The rough math on how much that is? Just take 7 per cent of last year's $3.3-billion ($230-million) and you've got an idea how much more the owners may be putting into their jeans each season in a new agreement.

So, the NHL wants to increase revenue sharing by $50-million but take roughly $230-million from the players in doing so?

And that figure rises as league revenues do.

You see the problem.

As I said off the top, revenue sharing is obviously a difficult subject for many Canadian fans to wrap their heads around. I'm sure the main question coming out of all of this is "why on earth do we want to prop up those six teams (and several others) to the tune of $260-million?"

The NHLPA's argument there would be twofold: Either (a) these franchises are moved somewhere more profitable to raise overall revenues or (b) as in baseball, the weaker ones are helped out enough to become more stable, thereby raising overall revenues.

What the players don't want to see is the current situation, which essentially has at least six teams drowning without a life boat and the league's richer teams (and the league itself) not doing nearly enough to help pull them out of it.

(And even if you could relocate a few teams, there aren't six good new homes for NHL teams. Some of these teams have to be salvaged.)

Even aside from the revenue sharing money, if you think about it from the perspective of the Boston Bruins or Philadelphia Flyers, two of the most powerful franchises in the league, why would you want these weaker franchises suddenly being more competitive? How does a strong team on Long Island (soon Brooklyn) help their bottom line?

It probably doesn't, which is why allowing a few select owners at the top to drive the bus isn't the best way to improve overall league revenues - the very thing Fehr and the players are pushing for.

It's in the players' interests here to improve the size of the overall pie; that's not always the case for individual owners, who have their own kingdoms to rule before worrying about the health of the league.

Now, given the choice between allowing these franchises to continue to wallow at the bottom of the standings and extending a helping hand, I'm fairly certain I know where most Canadian fans will stand. But it's worth pointing out that, if a teams are added in Quebec City and Toronto in the next few years and the dollar tanked again, franchises like the Nordiques and Jets would become the beneficiaries of a system that doesn't simply shrug and let the weak ones wilt away and ultimately die.

Maybe fans are right and making revenue sharing donations to those six struggling U.S. teams is throwing good money after bad, but from the players' perspective in these negotiations, they want 30 healthy franchises and, most importantly, fewer labour stoppages.

If the league won't relocate the Phoenixes into better markets to accomplish that, this is the only way to get there. 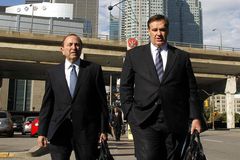 All talk, no action yet as NHL lockout drags on
November 8, 2012 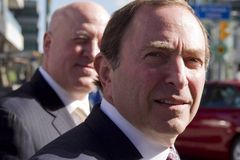