Four years ago, he made the NHL with the Colorado Avalanche, his favourite team "since I was five years old" back in Haliburton in Ontario's cottage country. Now, here he is, an established big leaguer at 22 and starting this season he gets to rub shoulders every day with the two Hall-of-Famers he idolized from those great Avalanche teams from the late 1990s and early 2000s.

The dream started for Duchene when Joe Sakic went from adviser to executive vice-president of hockey operations last May and then hired his old teammate Patrick Roy to coach the Avalanche this season. Now, Duchene says, he is mindful every day about doing his best.

"You definitely know who's watching you every night," Duchene said Tuesday, several hours before the Avalanche played the Toronto Maple Leafs at the Air Canada Centre. "For me, I idolized both those guys growing up. It means a lot to me to put my best foot forward. I'm always looking over my shoulder, trying to be the best I can be."

The biggest difference Duchene noticed between his previous coach, Joe Sacco, and Roy is that the old goaltender tends to hang around the players a lot more.

"After [playing] Nashville we had a meal after the game, we were all eating and he was in there with us sitting down on the couch having the same meal, just shooting the breeze and hanging out with us," Duchene said. "Obviously there's a huge respect level from us to him but it's pretty cool he feels comfortable to do that with us. You feel more like a team rather than coaches and players. That's really positive for us."

The vibe is positive enough so far that the Avs went into Tuesday's game with a 2-0 record against the likewise undefeated Maple Leafs (3-0). However, Roy says he knows where to draw the line when it comes to being familiar with his young team and Duchene agrees.

"Yeah, I definitely would," Duchene said when he was asked if Roy is a player's coach as opposed to a taskmaster like Leafs head coach Randy Carlyle. "At same time, we know he's going to demand the most from us. So far, when we need a kick in the butt, we've got it from him.

"When we deserve praise, we also got that. That's nice for us, we know what we're going to get. That's the way it should be. Everyone has loved him so far."

Roy's popularity increased dramatically with his players in the Avalanche's season- and home-opener when he hit all the sports highlight shows and became a You Tube staple with his spectacular blow-up with Anaheim Ducks head coach Bruce Boudreau in his NHL coaching debut. There are probably only one or two hockey fans who have not seen Boudreau and Roy screaming at each other last Wednesday over what Roy may or may not have yelled at Ducks forward Ben Lovejoy following a knee-on-knee hit on Avs' prize rookie Nathan MacKinnon, followed by Roy knocking down the glass partition between the players' benches.

While Roy drew much criticism plus a $10,000 (U.S.) fine from the league for letting his legendary passion and temper loose in his first game as an NHL head coach, Duchene said it made the right impression on him and his teammates because it told them right away their new coach had their backs.

"Absolutely. That was what we realized there," Duchene said. "He didn't like what was going on and he wasn't afraid to stand up for us. It was good for him to speak up and do what he did. It was a little much in terms of getting a fine but the effect on the players was great."

However, Roy is getting a little tired of talking about it.

"Things like this happen sometimes," he said. "My objective was to protect our players. I'd rather speak about the game tonight."

Roy said he views himself as more than just a teacher to his players, who make up one of the youngest teams in the league.

"I'm here to be their partner, to help them achieve their goals, to be the best players they can be," he said. "They know my door is open. They can talk to me."

Avalanche winger Gabriel Landeskog, who missed Friday's win over the Nashville Predators with a knee injury, is set to play against the Leafs. Semyon Varlamov will start in goal for the visitors.

Shoalts: In Colorado, Patrick Roy is all the rage
October 8, 2013 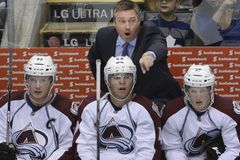 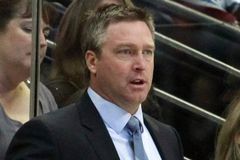