Mike Santorelli was a castoff. Now he has delivered two back-to-back overtime winners.

But before his heroics of the past several days, he was an unwanted hockey player. This past summer, two years removed from a 20-goal season for the Florida Panthers, the 27-year-old centre faced bleak prospects in free agency. With the salary cap coming down, he had only two goals and four points in 34 games during the lockout-truncated 2013 to advertise.

So he gambled on himself, making a significant cash bet. After he had been paid $1.6-million a year the past two seasons, Santorelli didn't wait around all summer for similar money. He signed quickly with the team of his boyhood and took a huge pay cut.

Santorelli grew up a Vancouver Canucks fan in the suburb of Burnaby and signed a deal with the team that pays him $550,000 this season – and it's a two-way contract, meaning the team could easily have shuffled him to the minors, where he would be paid $250,000.

In an interview Wednesday, Santorelli said the money was no issue for him. He just wanted to keep living his childhood dream, a shot at playing in the National Hockey League.

"I knew I had to re-establish myself," said Santorelli after practice Wednesday.

He's not headed to the minors any time soon. On Tuesday night – two days after scoring the overtime winner in Calgary, his second of that game – Santorelli was elevated to Vancouver's first line, playing alongside the Sedins. That move helped spark two key second-period goals.

And, again in overtime, Santorelli was key, on the ice for the winner – and it looked like he was the man responsible. With the game tied at two against visiting New Jersey, midway through the extra period, Santorelli battled in the corner in the offensive end and then lodged himself in front of the net. His screen was effective and helped Jason Garrison's wrist shot sail by former Canuck goaltender Cory Schneider. Garrison was credited with the goal but the puck did glance off Santorelli and the NHL made the scoring change Wednesday morning, giving Santorelli his third goal in four games – which has him tied for third in the league in goal scoring.

"Right now, everything I do with him, he does great things for us," said Tortorella of Santorelli after the game.

It extended a pulsing vein of praise from earlier in the day. Before the morning skate on Tuesday, Tortorella reflected on the past month, in which Santorelli has ascended from a guy that had something of an outside shot to make the team to an early central figure in the team's early success, 3-1.

Santorelli, 6-foot and 189 pounds, impressed immediately at the start of training camp, arriving in stellar shape. On the first gruelling day of fitness in Tortorella's boot camp, Santorelli was the team victor in a two-mile run , besting even the Sedin twins, fitness fanatics.

Needless to say, the coach who loves heart, grit, is enamoured.

"It's a pretty good story, for a guy coming to a pretty good team, and simply saying I'm going to make this club. Just by his actions," said Tortorella Tuesday morning. "He doesn't say boo. I don't think I've said one word to him. He just goes out and plays. Forget about the goals. There are a lot of other little things he does in the game. I'm looking up and down the bench in all situations for him, so it's a really good story."

Come Tuesday night, five minutes into the second period, with the Canucks losing and stalled, Tortorella did what's he's been doing of late and shuffled lines. With Alex Burrows hurt, and Zack Kassian suspended, the Sedins have seen a rotating cast of characters. It wasn't clicking with Jannik Hansen, so Tortorella put Santorelli out with the stars.

The results came fast. Santorelli was on the ice with the Sedins for two mid-period goals, evening the score, and then helped deliver the winner in overtime, finishing the night plus-three, the best of any player on the night in a 3-2 victory.

Santorelli has been beyond modest. He talks about just trying to get better every day and on Tuesday even apologized to reporters for repeating the same refrain.

He made a gamble. It's paying off fast. He knows it's a long season. He lets his play speak for him. And that play has a lot of people talking about him, among them one of his linemates on Tuesday night, Daniel Sedin.

"Mike has been tremendous so far." 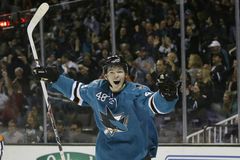 new
Luongo one save better than Schneider as Canucks beat Devils in OT
October 9, 2013 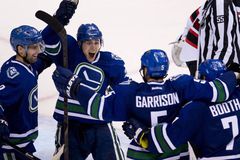 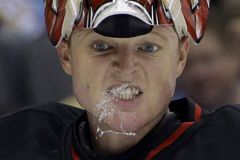 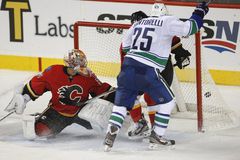