It was Jan. 18 – an off day on a Wednesday sandwiched between home games against the Winnipeg Jets and Boston Bruins – and Ilya Kovalchuk had rented out a restaurant and bar in Hazlet, N.J., to bring in a few hundred New Jersey Devils fans.

Normally shy and reserved, Kovalchuk was making his first public appearance on his own since joining the Devils, and this one had a different feel than any other autograph signing he had done before.

All of the proceeds were going to the Yaroslavl Families Victims' Fund – a charity Kovalchuk and his agent Jay Grossman had established and run throughout the season for the families of those killed when the Yaroslavl Lokomotiv KHL team's plane crashed last September.

The tragedy had weighed on Kovalchuk all season, and he spent the first few months signing photos for $17 for any fans who wanted to donate to the cause.

He had known and played with almost every player on the plane and was particularly close with former Devils teammate Alexander Vasyunov, a 23-year-old who had just returned to his hometown to skate for the Lokomotiv after three years in North America.

Yaroslavl head coach Brad McCrimmon had also been an assistant coach in Atlanta during Kovalchuk's time with the Thrashers.

"He knew virtually every guy on that team," Grossman said. "He was still there and went to the memorial that they had in the arena before coming over for training camp. It was a tough way to start the season for sure.

"He expressed to me early on he wanted to try to do something."

The crash came so close to when NHL training camps opened that it affected many players deeply early in the year, something Grossman saw in several of his Russian clients.

Two young players, in particular, were affected. Vasyunov's former roommate Vladimir Zharkov, who plays in the Devils system, and Florida Panthers prospect Evgeny Dadonov, who was his best friend (and also lost close friend Alexei Cherepanov to a heart ailment in 2008), both had difficult seasons on and off the ice.

Grossman even advised the NHLPA that they should keep an eye on those dealing with the tragedy.

"My point to the union was just you don't know how it affects people," Grossman said. "I made that statement to them because I could see [evidence of posttraumatic stress disorder]in some of them. As I spoke to players, there was hardly a guy that in some way didn't know somebody on that team."

Coming off a trying first full season in New Jersey, Kovalchuk's 2011-12 didn't exactly get off to a strong start either.

He had only 14 points and was minus-8 after the first 18 games, with criticism again surfacing around the league over his controversial 15-year contract and the gamble the Devils had made with the lifetime deal.

Not long after that autograph signing in Hazlet, however, Kovalchuk began to find his game. After the all-star break, he had 18 goals and 43 points in 34 games – third best in the league behind only Steven Stamkos and Evgeni Malkin – and that has carried over to a dream postseason run.

Kovalchuk had played in only nine career playoff games in the first nine years of his career – seven and a half of which were spent with the basket case Thrashers – but has more than doubled that with 11 games already and four more guaranteed this year.

The Devils, meanwhile, are back in the third round for the first time since winning the Stanley Cup in 2003, and their $100-million man has drawn rave reviews for playing through a painful back injury that kept him out of only Game 2 of the second round series with the Philadelphia Flyers.

The dominant player Devils GM Lou Lamoriello had hoped he was getting in 2009 has truly arrived – and is now, at age 29, a Conn Smythe candidate.

"I can't say enough about Ilya," Lamoriello told ESPN's Pierre LeBrun on Friday. "First thing you have to know about Ilya Kovalchuk is that he's a good person. He cares about his teammates, he gets along with them, he interacts with them.

"He came into an organization [in Atlanta]when he was 18 years old and he was asked to do things that you really shouldn't ask anyone to do and along the way you take things into your own hands. He's come here, he's fit in, he's responded to the changes that were asked of him to make for the good of the team, and I can't say enough about him. I just can't say enough."

Grossman doesn't draw a direct line from last September's tragedy to Kovalchuk's current play, but he does believe that everything that happened this season – from the fundraising to his terrific play – is a sign of the kind of person and player he has represented since meeting the big, talented kid from Tver as a 16-year-old.

Whatever reputation some in the hockey world may have ascribed him after all those lean years in Atlanta, winning was always was Ilya Kovalchuk has been about, Grossman says.

He just hasn't had a chance to do it until now.

"That's what really struck me about Kovy from the first day I met him," Grossman said. "I don't think people realized how he gave it every little last bit he had [in Atlanta]to try and make it go there. He was there for a long time...

"He's on his way to a Hall of Fame career. But unless you've won it all, I guess people always have questions. I think he's doing a lot to silence those questions at this point."

Even now as the playoffs are ongoing, Kovalchuk's fundraising continues. Autographed photos are available for a $17 donation and T-shirts for $71 by contacting info@puckagency.com.

There is also a signed jersey that is expected to be auctioned off after the playoffs through Kovalchuk's Facebook page: http://www.facebook.com/IlyaKovalchuk17.

For more on Kovalchuk, Ellen Etchingham has a good piece at The Score here.

Controversial contracts paying off for Devils, Rangers
May 8, 2012 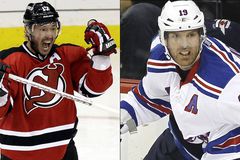