Ryan Miller sat alone at his locker-room stall for a long time, pondering two lost points for the Vancouver Canucks.

Justin Williams and Jarret Stoll scored 53 seconds apart late in the third period Thursday as the Los Angeles Kings roared back from a 2-0 deficit midway through the game to stun the Canucks 3-2.

The goals came on the Kings' 39th and 40th shots of the night as Los Angeles took advantage of a sluggish Canucks team that was coming off a big 3-1 road victory over the San Jose Sharks on Tuesday.

"One of the more disappointing games in a while," said a downtrodden Miller. "Just blew it at the end.

"It's frustrating to get to 57 minutes or so and blow it."

Williams tied the game on the power play with 2:07 left in regulation with his ninth of the season and first in eight games on a great shot over Miller's shoulder before Stoll buried the winner – his fourth of the campaign and first in 13 – with 1:14 to go.

"We gritted it out and sometimes at the end of the game you look and say 'All right, that was justice' because I feel we dominated the game," said Williams. "We had the better opportunities and we were able to show some resiliency, some resolve and not give up."

Dwight King had the other goal for Los Angeles (19-12-8), which got 14 saves from Jonathan Quick.

Radim Vrbata, with a goal and an assist, and Alexandre Burrows scored for Vancouver (21-12-3), which was only in the game thanks to some key saves from Miller in a 37-save performance.

"We stopped playing. Being up 2-0, I don't know if we felt comfortable or what it was but it wasn't good enough," said Canucks captain Henrik Sedin. "You can't expect to win when you get outshot 40 to something. It's not good enough. We know that."

The Canucks have been outshot 103-51 in their last three, including that win in San Jose and a 2-1 overtime loss in Anaheim against the Ducks.

"There's going to be stretches like that," Miller said of the lopsided shot margin. "We'll clean it up. We'll get better. It's not always neat, tidy and clean during the season. You're going to have disappointments. Unfortunately tonight we couldn't at least get a point out of it. That's pretty frustrating."

The Canucks carried a 2-1 lead into the third despite being outshot 30-10 through two periods, and Miller had to be sharp again five minutes into the final period on a shot off the stick of Stoll on a 3-on-2 rush.

It looked like Vancouver was going to hold and get off to a winning start in 2015 before Williams and Stoll scored in quick succession to turn the game on its head as the Kings improved to 5-8-6 on the road and leapfrogged the Canucks in the Pacific Division standings.

"It was nice to get the two points and not give them any," said Stoll. "Good road game by everybody and hopefully we can use this as a little springboard for road games and get our road record going. It feels good."

The Canucks' penalty killing unit had been lights out in recent weeks before defenceman Ryan Stanton took a hooking penalty with under four minutes to go that led to Williams' goal.

"It's definitely tough. I don't think we had our best effort tonight, but to let it slip away at the end there definitely hurts," said Stanton. "I don't think we moved our feet much tonight. It's quite the difference from the San Jose game the other night."

Vancouver was up 1-0 after the first and doubled that lead at 3:39 of the second when Vrbata buried his 15th of the season and second in as many games over Quick's blocker on one of the Canucks' two shots in the period.

Los Angeles would direct 14 pucks on Miller in the middle period and finally got on the board when King chipped home his own rebound at 14:39 for his fifth goal of the season.

Earlier in the period, the Kings hit their second post of the night when Anze Kopitar found iron on a Los Angeles power play.

"We got out to a lead but we sat back all game. I think they pretty much had control of that game for the most part," said Canucks forward Brad Richardson. "In the end you still should have that win – pretty disappointing.

"In those games you've got to find a way to get a point. That's what teams do. That's a huge point, two we should have had and we lost them both."

Vancouver was just 2-9-3 against California teams last season – one of the big reasons the club missed the playoffs for the first time in six years – and are 3-2-2 this campaign through eight games.

"I'm sure they're frustrated because they had a 2-0 lead," said Kings head coach Darryl Sutter. "But that's how the division is.

"It's so close. It comes down to a big play, a bad goal or something almost every night."

The Canucks opened the scoring at 12:18 of the first period on the power play when Burrows poked a loose puck past Quick for his ninth of the season.

Prior to that breakthrough there were a number of chances at both ends of the ice, with Tanner Pearson ringing a shot off the post behind Miller for Los Angeles less than two minutes in before Quick stoned Richardson moments later.

"They're a good hockey team. They played hard," said Desjardins. "For whatever reason we didn't have our jump. You've got to think if it's one guy then maybe it's a guy, but I think it was the team. Maybe we didn't prepare quite right but we weren't good as a team."

Notes: Los Angeles downed Vancouver 5-1 on Nov. 8 at Staples Center. The teams meet three more times this season. ... The Canucks continue their five-game homestand Saturday against the Detroit Red Wings, while the Kings open a season-high seven-game homestand against the Nashville Predators. 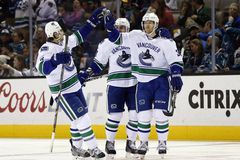 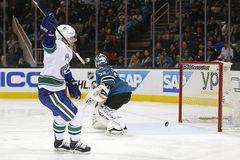 Ryan Miller drove past the major-junior expressway to NHL success 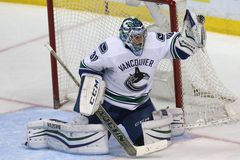