'Mr. Hockey' is no more and is forever at the same time

Surely it cannot possibly be more than 60 years – and yet it is.

My older brother Jim, who has a far better memory, remembers the score, the fact that the Detroit Red Wings beat his beloved Toronto Maple Leafs and that both "Terrible" Ted Lindsay and Gordie "Elbows" Howe scored.

I was too young. Our father had been given tickets to Maple Leaf Gardens by a buyer who toured the lumber mills of the north in search of good timber. We had driven down, our parents baffled by clover leafs, unused to streetlights, and I recall being wary of the Gardens' escalators and, after too much pop, terrified by a stainless steel urinal that seemed as long and packed as the arena itself.

But I do remember, vividly, when our father pointed at No. 9 in the Red Wings jersey, a lanky fellow with a dark forelock of hair, and said, "There is the greatest hockey player in the world."

Wayne Gretzky certainly thought so, and often said so. There were, and have been, players who could skate faster, shoot harder, score more points and set more records than Gordie Howe – but there has only been one "Gordie" in hockey, a player so ingrained in the Canadian sports psyche that no other name was required for identification, not even the "Mr. Hockey" that his late wife, Colleen, wanted to copyright to ensure no one else would ever take it.

No one else would ever dare.

Watch: Roy MacGregor on the ‘greatest hockey player that ever lived’ 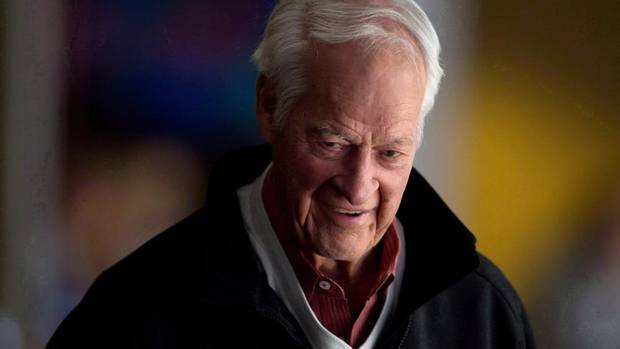 Obituary: Gordie Howe 'did everything'

He played in, believe it, six decades, joining the Wings in the 1940s and playing a single shift for the Detroit Vipers in the 1990s when he was 69 years of age. Incredibly, he had almost been killed in 1950 when he fractured his skull in a horrible on-ice collision with Toronto's Ted Kennedy. Doctors thought they would lose him in the emergency ward but he came back, played again and ended up with six National Hockey League scoring championships, six Hart Trophies as the NHL's best player and 21 all-star selections.

He retired in 1971 and un-retired two years later in order to play with his sons, Marty and Mark, with the Houston Aeros of the upstart World Hockey Association. At 46 he scored 100 points and was named the league's most valuable player. He played seven years in the WHA, averaging more than a point a game, and in 1979-80 played one final year in the NHL with the Hartford Whalers, suiting up for a remarkable 80 games, scoring 15 goals and 41 points. He was 52 years old.

Gordie un-retired to play with sons Mark (centre) and Marty.

His hair had turned grey, then white. "If I dyed my hair," he joked, "they'd want more speed."

He may have lost a step, but he was still Gordie Howe. Mark Howe, who would much later join his father in the Hockey Hall of Fame, was a teenager playing in Houston with his older brother and his father, and opponents often targeted the youngest Howe. Mark remembers once being pummelled by an older player and seeing his father's bare hand reach down, place two fingers in the larger player's nostrils and lift him off the ice.

"The guy's nose must have stretched a foot," Mark said.

1971: Retires from NHL due to chronic wrist injury

1973: Signs with the World Hockey Association to play with sons Mark and Marty

Howe has one record that may never be broken: He finished in the top five in NHL scoring for 20 consecutive seasons.

"It seemed like the right thing to do at the time," said his father.

Gordie Howe might have been a world champion boxer. Although he was remarkably mild-mannered and gentlemanly off the ice, no one who witnessed it will ever forget what he did to the New York Rangers' Lou Fontinato in the late 1950s. He might have played professional baseball, sometimes showing up at Detroit Tigers batting practice where he would send pitch after pitch sailing over the fences.

And yet, it was somewhat of a fluke that Gordie Howe even found sport. He was born in Floral, Sask., the sixth of nine children born to Ab and Katherine Howe. The family soon moved into Saskatoon where they struggled financially as Ab sought work during the Depression.

There was no money for sports equipment. A neighbour desperate for help feeding her new baby brought a gunny sack to the Howes' home and Katherine spared her a few coins for the contents, though there was nothing there of use apart from a pair of old skates. Gordie put on one skate, sister Edna the other, and off they went to the frozen sloughs. The skates were too big for him but a dime convinced Edna to give hers up and young Mr. Hockey was on his way.

"He was clumsy and backward and bashful," a crusty Ab Howe told an early radio interviewer. "That's why I thought he'd never amount to anything."

Gordie was dyslexic and poor at school, but he was curiously ambidextrous and learned to switch hands during play, which gave him an enormous advantage when it came to shooting in close on goaltenders.

Howe with a 12-year-old Gretzky. Gordie Howe was the way Canadians like to think of themselves – strong, tenacious, a team player, determined, triumphant in the end yet never arrogant or bragging about victory.

His strength – sloping, muscular shoulders that he said he developed by hanging from a door frame when he was a kid – was legendary. Murray Costello, the former head of Hockey Canada who once played with him in Detroit, recalls watching the Montreal Canadiens' star defenceman, Doug Harvey, virtually hanging off Gordie's back as he rushed the Montreal net, yet Gordie somehow roofing the puck with only one hand on his stick. Next day at practice, a gaggle of Wings players stood in front of an empty net seeing if they could replicate the feat by using just one hand to shoot. "None of us could even lift the puck," Costello laughs.

The strength they would eventually talk about, of course, was strength of character. Off the ice, Gordie Howe was the perfect ambassador for the game, always polite, always willing – his slow, carefully crafted signature as clear and deliberate in his 80s as it had been when he was 18.

He was the way Canadians like to think of themselves – strong, tenacious, a team player, determined, triumphant in the end yet never arrogant or bragging about victory – even if such a self-portrait of a nation is debatable. In Gordie Howe it was not.

"He was so special," says Mr. Costello. "He was 'the guy' for so many of us. He was everything on the ice and even more off the ice – a big man-boy who wanted to do nothing but play hockey."

After Gordie suffered a major stroke in 2014, Hockey Canada head Tom Renney was asked what Mr. Howe meant to him and the game he oversees. "To me," Renney said at a news conference in Ottawa, "he symbolizes the fabric of our country. He reminds us of what it's like to be a Canadian, to be a straight-up person, to work hard, to be humble, to be tough, to be able to go your own way and be able to persevere.

"[He was an] icon in a manner in which he would never have wanted to seek out. He just loved playing hockey – and it speaks volumes to what Canadians are all about."

Renney remembered listening to the radio when Howe was in his prime and seeing him play on early CBC Saturday night broadcasts. "My Mom loved him more than she loved my Dad," Renney chuckled. "And that was all right with my Dad."

He was friendly to everyone – and got away with anything. My daughter Kerry was just 15 when she accompanied Gordie, Ken Dryden, several ex-NHLers and a few media to Saskatoon for a charity hockey game that raised enough money to save the rundown rink in nearby Radisson. She was standing along the boards with me the afternoon of the match when, out of nowhere, Gordie Howe came up behind her and hip-checked her and down she went. It is one of her favourite memories.

The "greatest hockey player" her grandfather ever saw had just given her his personal stamp of approval.

She still treasures the moment, just as all of us will forever treasure the memories of this quintessential Canadian.