Grant Fuhr partied like a rock star, or a Stanley Cup-winning NHL superstar during the prime of his career.

His drug use led to a suspension and plenty of unwanted attention. Yet almost 30 years later the former Edmonton Oilers goaltender has no regrets and expressed that sentiment in his new book, Grant Fuhr: The Story of a Hockey Legend.

"I'm 100 per cent comfortable with my life now," Fuhr told The Canadian Press on Thursday. "That's probably one of the best things about it is to have to sit back and go through it, you understand if you're comfortable with life or not.

"And I'm okay with everything that's happened. Yeah, some of it's bad, but at the same time it makes you a better person."

The Spruce Grove, Alta., native wrote this book along with former Calgary neighbour Bruce Dowbiggin. It's structured as a series of 10 key games from the Hall of Famer's career, with Dowbiggin essentially narrating and Fuhr dropping in his reflections now and then.

Along with the on-ice success, which there was plenty of, the book touches on Fuhr's substance abuse and racial tensions that arose when he started playing in the United States. Dowbiggin didn't shy away from mentioning Fuhr's cocaine use, and that's fine with the 52-year-old who wants readers to realize life is about making mistakes and still being successful.

"You don't have to be perfect," Fuhr said. "I would look great in a halo, but it's never going to happen."

The book unearthed a quote from Wayne Gretzky: "To be able to play at the level he played at for all those years (while on drugs) is a surprise."

Looking back on it, Fuhr doesn't believe drugs hurt his performance.

"The hardest part of goaltending is to stay focused," Fuhr said. "So the fact that you get a mental break away from the game is almost refreshing.

"For me at that time, the most comfortable place to be was on the ice. That's where I was happiest. It probably made me a little more focused than most."

The summer of 1986 is one of the turning points in Fuhr's life. It followed Steve Smith's own goal against the Flames but of more importance to Fuhr, that's also when he lost his father, making for a terrible off-season.

"I was never a good student but I learned everything through life. So had I did it a different way, could things have turned out a little different? Yeah they probably could've. But at the same time I wouldn't have the same life experiences."

Fuhr said there was nothing in the book that was difficult to re-live. Now, 23-plus years after his suspension, 21 years after being refused admission into a Buffalo-area country club because of his race and 11 years being inducted into the Hockey Hall of Fame, he has a better grasp on life and his career accomplishments.

While Fuhr doesn't see race as something people should be defined by, he also better understands the historical significance he had on the NHL.

"When you're playing you never really think of it, you're just playing and enjoying the game and you never really have to worry or think about it, whereas now I get a chance to look back at it," Fuhr said. "You can see different kids at different times and such, and you realize that it has more prevalence now than it ever did."

Fuhr also may have had an impact on the way the league and Players' Association deal with drug use. In 1990, then-president John Ziegler suspended Fuhr for a full season for conduct "dishonourable and against the welfare of the league."

In the book, Fuhr writes, "The biggest misconception about that period of time is that the substance problem was still ongoing — but by the time it finally hit the paper it had been two years over and long stopped, over and done."

His suspension was eventually reduced, but nowadays the league handles similar situations with more of an eye toward helping players. Fuhr said that was the best part of his punishment in retrospect, that current players don't have to deal with the same heavy hand.

Fuhr got himself in and out of trouble and along the way managed to win 403 career regular-season games for the Oilers, Toronto Maple Leafs, Buffalo Sabres, Los Angeles Kings, St. Louis Blues and Flames. He was in net for four Cups and has five championship rings because he was part of the 1989-90 Oilers team that Bill Ranford led to the title.

As he signed books that filled the table in front of him, Fuhr wore his 1988 Cup ring on his right hand. He rotates them but has one on all the time.

"The only one that stays is the Hall of Fame ring and I actually wear it on a chain around my neck," Fuhr said. "I think it's the pinnacle of what you accomplish as a player, to get into the Hall of Fame.

"So it's the one constant that I keep. Yeah you could wear all five, but that might be just a little gaudy. I always wear one."

Those rings — and now the book — help remind Fuhr of what he has done in hockey but hadn't really thought about much.

"When you hit 50 you get to a certain point where you get to reflect on life a little bit," Fuhr said. "I'm gaining on the top of the hill, I don't think I'm there yet because I plan on living to 100.

"The best part of it is I realize how comfortable I am in life, more than anything. That's what the book gave me, the opportunity to figure out is that life's pretty good. Actually I didn't think it was that bad before, but I know now it's pretty good." 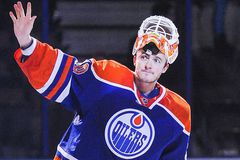 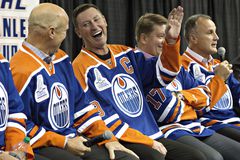