Could the Team Canada brain-trust really be thinking about leaving a player who was chosen the NHL's top defenceman last season at home next February?

According to reports from the hockey insiders at TSN and TVA, they very well may do just that. With the Sochi Games less than 100 days away, the latest speculation suggests P.K. Subban is now a long shot to make the Olympic squad.

Not that the Montreal Canadiens blueliner is much concerned about it.

"I think it can bother you if you're focused on it, but the reality is I'm not focused on it, I'm focused on this team here ... you look at the start of the season, I don't think it's a bad start, but I think there's room for improvement, so I'll just get better every day," the 24-year-old said before the Habs flew out on a two-game road swing with the players' dads in tow.

It might seem curious that Team Canada would pass over as gifted a skater, stickhandler and shooter as Subban for a tournament on Olympic-sized ice, but doing so would surely owe to a tag that has stuck to him since he was a junior player: risky in his own end.

The stats don't bear that out – by any measure, Subban is an above-average defender, and has shown elite defending ability in his career – but how can Steve Yzerman and the other Team Canada selectors trust Subban to be steady and reliable when there are recent indications the Habs have their doubts?

On Tuesday, with Montreal clinging to a 2-1 lead against Dallas, Therrien nailed Subban to the bench for the final 2:56, and threw the statuesque Douglas Murray on the ice alongside Markov.

Though Dallas generated a couple of quick scoring chances, the Habs held on.

But Therrien's decision to keep his stud defenceman off the ice raised eyebrows, and voices, on Montreal talk radio and in fan forums – all amid the usual circumspection, which is to say borderline hysteria.

It's also odd that the Habs don't often use Subban on the penalty kill, considering his effectiveness on the first unit as recently as two seasons ago.

Therrien was asked if that's a function of Subban's defensive ability, reliability and maturity on Thursday, and said this: "I look at his ice time, he has more ice time this year than he did last year, his progression is part of the equation here."

Subban is averaging 24 minutes 33 seconds a game, a little over 1:20 more than last year, when he started the season late after a brief contract dispute (by way of comparison, the league leader in ice time, Minnesota's Ryan Suter, averages nearly 29 minutes).

And Subban's average on the penalty kill is 1:01 per game, almost half a minute less than last year and the lowest of his career (he has played a grand total of 1:45 while short-handed in the past four games, 1:44 of it came in a win over Anaheim).

Asked about his usage, Subban joked about not having any coaching qualifications and said "I don't make those decisions".

Therrien can reasonably argue the Habs' resurgent penalty killing doesn't need Subban, who can be rested for the power-play, on which he is averaging 4:39 per game, fourth-highest in the league.

It's also true that the Habs are the league's second-stingiest defensive team with the current blueline configuration – the imminent return of the injured Alexei Emelin, who signed a four-year, $16.4-million contract extension Thursday, will only make them tougher to score on.

So there doesn't appear to be anything sinister at play, the simple and most obvious explanation is that Therrien truly believes in bringing Subban along slowly.

But when Therrien was asked if Subban should be on Team Canada, he said, "It's not for me to say. I'm in charge of the Montreal Canadiens."

On whether Subban is a world-class player he added: "Whether I see him that way or not, my opinion doesn't change anything."

Therrien's caution stands in contrast to the recent boosterism from hockey people such as Larry Robinson, David Poile and Lindy Ruff, each of whom put in a public word for their players.

When pressed on what he makes of the James Norris Memorial Trophy winner's recent form – he has been held off the scoresheet in four in a row after a blazing start in which he scored 11 in his first seven – Therrien said: "[Subban] is a player who brings a lot of energy, he's able to contribute goals and points offensively. We have a team concept in our organization, that we follow and that we believe in. It's our team concept that will get us to the playoffs, and it's our team concept that will allow to progress as a team."

There's a tendency in the overheated market that is Montreal to make irrational inferences, but at the very least, it doesn't appear Subban's team is mounting an aggressive lobbying effort to combat the perception he is a one-dimensional player.

Price stellar again as Habs edge Stars for second win in as many nights
October 29, 2013 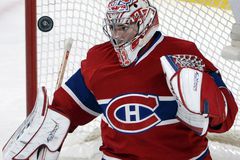 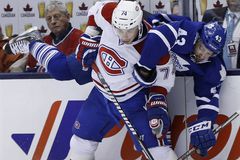