The Montreal Canadiens, one of Quebec's most sacred institutions, have waded into the province's stormy language debates by hiring a coach who can't speak French.

The Habs announced on Saturday that the job is going to assistant coach Randy Cunneyworth, replacing Jacques Martin at the helm of the struggling squad.

The backlash in some quarters was almost immediate.

Local radio call-in shows and online forums were abuzz with questions about whether a non-French speaker should be awarded the top post.

A prominent sports writer summed up one side of the issue, arguing the club failed in its responsibility to protect and promote the French language.

"They are also an institution. And like all institutions, they have a responsibility to the community."

Cunneyworth, who said he hopes to learn French, is the Canadiens' first unilingual anglophone head coach in nearly three decades.

The Ontario native was appointed on an interim basis until at least the end of the season.

Some fans suggested they wouldn't be so upset if the Habs had brought in a highly-regarded Stanley Cup winner, such as the Detroit Red Wings' Mike Babcock, a McGill alumnus, instead of an assistant without NHL head coaching experience.

Others said the most important thing is winning. They say that if Cunneyworth, a young, tech-savvy coach and former NHL captain, manages to revive the Habs, then he should stick around.

The controversy is the latest in a string of Quebec media stories touching on the perceived regression in the use of French, inside the province and in Ottawa.

The Parti Quebecois has, predictably, already tried to capitalize on the kerfuffle.

Another separatist group even called for a boycott of Molson beer to punish the owner, Geoff Molson.

The Habs have been down this road many times before.

Former captain Saku Koivu, a Finnish-born star, was criticized for his lack of French during his time with the team.

Koivu was even called out by a Quebec City lawyer during a 2007 provincial commission studying the so-called reasonable accommodation of minorities and immigrants.

PQ Leader Pauline Marois went one step further, saying at the time that the Canadiens should insist on French courses for its players.

Other players, like Ontario-born Bob Gainey, have won fans' hearts by learning French on the job. Gainey, also a former team captain, later became general manager of the team.

The intersection of language politics and sports may seem silly to some, but the Canadiens are a Quebec institution whose impact extends well beyond the realm of sports, said one expert.

"It's always been wrapped up in the politics of the province," said Nicolas Moreau, a member of the faculty of social sciences at the University of Ottawa who co-edited a new book on the Habs and Quebec society.

"We are seeing this again now."

Moreau pointed to the Maurice Richard riots of 1955, seen as an early example of Quebec nationalism, with members of an aggrieved minority rising in revolt against Anglo oppression.

The team was founded by a businessman who, although Anglo-Irish, created it specifically for the French-Canadian market.

In the early days, the team was closely tied to Montreal's French-speaking community, and the team was almost entirely francophone, said Audrey Laurin-Lamothe, co-editor of the book.

"It's important for the Quebecois not only as a pastime, but because it's part of our identity, and language is wrapped up in that," said Laurin-Lamothe, a PhD student at the Universite du Quebec a Montreal.

More recently, the Canadiens have been criticized by some for not stocking the club with French players.

There is concern that if the Habs cease to hire Quebecers as coaches, francophones won't be able to get a foot in the door.

Some fans are hopeful that if the defunct Nordiques return to Quebec City, the Habs will be under more pressure to recruit francophone talent.

"When the Nordiques were there the Habs definitely had a stronger emphasis on French," Moreau said.

There has been much speculation that the Canadiens would behave differently if faced with a Quebec City team that would market itself more aggressively toward the Quebecois.

The Quebecor media empire, which is trying to bring back the Nordiques, has already picked up on that Quebec-identity theme lately in some critical news reports on the Canadiens and elements of its ownership consortium.

For all the controversy, though, the Canadiens have served as a unifier through the club's storied 102-year history.

The team has often been compared to a religion, bringing together the city's francophones, anglophones, and the rest of the multilingual mishmash in shared idolatry.

"We had for the first time a mix of languages," she said. "The Punch line really helped changed the perception of the team to a club for the whole city." 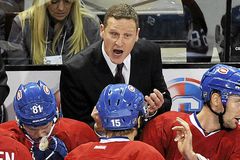 Pierre Gauthier could be next in Habs' firing line
December 18, 2011 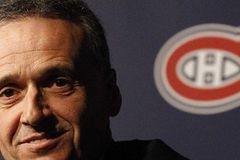