There are thousands of names engraved on the Stanley Cup but Jannik Hansen's would represent a first if the Vancouver Canucks beat the Boston Bruins to be crowned NHL champions.

Stanley Cup tradition allows each player of the winning team to spend a day with the trophy and Hansen would have the opportunity take the silver chalice somewhere it has never been -- Denmark.

But before a parade through Hansen's hometown of Herlev can be planned, the Canucks must record three more wins to clinch the best-of-seven final with game two set for Saturday in Vancouver.

The Canucks have jokingly labeled Hansen as the team's best practice player but the 25-year-old winger showed on Wednesday he can be perform on the big stage as well setting up a charging Raffi Torres for game one's only goal that secured Vancouver 1-0 series lead.

"Obviously if you want to play on a team that's going to compete for the Cup, you need to fill whatever role is given to you," Hansen told reporters.

"You look at our lineup, there's only so many players that can play on the first and second line.

"If you don't have the skills that they do, you have to find a different way to contribute."

The 287th player taken in the 2004 NHL draft from a country better known for developing fine soccer players, Hansen has had to work hard and be patient to earn his place on a talented Canucks squad that was the best in the NHL this season.

"He's very underrated," said Canucks defenseman Kevin Bieksa said of Hansen. "The guys that see him day in and day out appreciate how good he is.

"We joke that he's our best practice player and he usually is but he's gotten better over the last few years.

"He's been here for a long time now and he just keeps getting better and better."

A strong skater, the gritty Hansen learned to play the game in his native Denmark before making the jump to North America as a teenager joining the junior A Portland Winter Hawks.

Hansen's apprenticeship included two seasons in the minor leagues with the Manitoba Moose and eventually more ice time with the Canucks, eventually appearing in all 82 Vancouver games this season scoring nine goals and 29 points.

"Jannik, our first year, five years back, we had some injury situations in the playoffs and he's one of the young men that we called up," recalled Canucks coach Alain Vigneault.

"After that, he went back to Manitoba, needed some more time there as far as playing time.

"I think he had a great role model in Mike Keane, who really helped him with positional play, penalty killing.

"It's paid off. He's been with us now for a couple years. He's logging important minutes."

"I think it started about 10 years ago, my age group were the first players that they started a new development program," said Hansen. "They brought in a couple Swedish coaches who brought the Swedish style to Denmark.

"You're seeing the fruit of that now.

"I think we've just seen the start of it because younger and younger players are leaving Denmark earlier than we did to test themselves.

"They're definitely getting better. You see that in the draft. It's not late-rounders. It's early-rounders now.

Jannik Hansen putting Danish hockey on the map
June 2, 2011
Burrows knows he has to be smarter
June 3, 2011 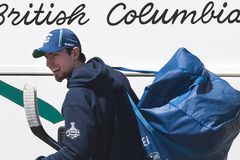 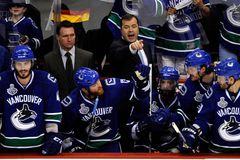 The two sides of Alex Burrows
June 2, 2011
Follow us on Twitter @globe_sports Opens in a new window
Report an error
Due to technical reasons, we have temporarily removed commenting from our articles. We hope to have this fixed soon. Thank you for your patience. If you are looking to give feedback on our new site, please send it along to feedback@globeandmail.com. If you want to write a letter to the editor, please forward to letters@globeandmail.com.
Comments