Sure Winnipeg Jets fans have made life difficult for opposing teams at the MTS Centre this season. But wait until Saturday when the Toronto Maple Leafs come to town. That will unleash a whole new level of hostility.

"It's going to be a crazy atmosphere," said Chuck Duboff, who grew up a Leaf fan but will be at Saturday's game cheering loudly for the Jets. "I've been excited about this since I saw the schedule come out."

Animosity? Resentment? Grudge? Jets fans have all that and more when it comes to Toronto. Yes, Jets fans booed the Phoenix Coyotes mightily when they showed up in early December, but that was only 15 years of pent-up anger over the team's abrupt departure in 1996.

The hatred of Toronto goes back almost 40 years – all the way to the late 1970s, when Leaf owner Harold Ballard campaigned against allowing the Jets and three other World Hockey Association teams into the NHL. That so enraged the city there were calls to boycott companies connected to the NHL as well as the CFL's Hamilton Tiger-Cats, who were owned by Ballard at the time. The fury went as far as Ottawa with Winnipeg politicians leaning on the federal government to push the NHL to override Ballard's objections.

When the Jets finally got into the NHL in 1979, along with the Edmonton Oilers, Quebec Nordiques and Hartford Whalers, the Winnipeg Arena was covered in "We Hate Leafs" signs for the first game against Toronto.

The hatred didn't end there. When the Jets fled to Phoenix the resentment kept building as Winnipeggers endured years of being force-fed Leaf games on Hockey Night In Canada. Even now with the Jets back in the NHL, many Winnipeggers still feel the Leafs dominate media coverage. Adding to the injury for some fans were comments last June by Leafs general manager Brian Burke who dared question the long-term viability of the Jets, saying that while it was great to have the team back in the league, "It's not a slam dunk" the Jets will be a success.

If all that wasn't enough consider this: the Jets and the Leafs have the same record heading into the game, 18-14-5 with 41 points. And, as of Friday, the teams hold down the final two playoff spots in the Eastern Conference.

Thus, the atmosphere for the New Year's Eve will be special.

"Winnipeg Jets' fans always feel like we're the red-headed stepchild," said Derek Brookes, an ardent Jets fan who can't wait for Saturday's game. "Even though Winnipeg has gotten more than its normal share of coverage because of the return of the Jets, the fans have still got a chip on their shoulder."

There will probably be a few Leaf fans at the MTS Centre and some brave souls may even wear their Leaf jerseys. In fact there was a time when Leaf fans filled the Winnipeg arena, back when the Jets games weren't such a hot ticket.

"Ironically, the Leafs used to be one of the more popular teams at the old Arena," recalled Jets fan Michael Bailey. "You would see more Leaf jerseys than Jets jerseys when Toronto came to town, despite the Ballardian opposition to the merger. ... All that said, this time around things are very different. I'm certain that there will be a few Leafs jerseys at the MTS Centre on Saturday but it'll be all Jets, Jets, Jets. It's cool to be a Jets fan these days. It wasn't so cool 25 year ago for some reason."

Jets fans will have to confront one dilemma Saturday. What to do with Leaf goalie James Reimer? The MTS Centre crowd has taken to jeering opposing goaltenders constantly this season but Reimer hails from Morweena, Man., about 140 kilometres north of Winnipeg, and he is expected to have loads of family and friends in attendance.

All that hype and hatred has made the game a pricey event. Tickets for all Jets games sold out long ago but some are available on reselling sites such as Stubhub. As of late Friday there were six tickets listed for Saturday's game. The asking price? From $479 to $1,000. 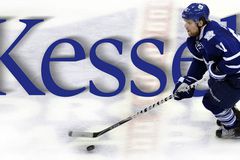