A playoff run that began with so much promise for the Vancouver Canucks ended the way so many have for this team over 40 seasons – in heartbreak and disappointment.

But there is no question that the team's 4-0 Game 7 loss to the Boston Bruins at Rogers Arena Wednesday dwarfs any other Stanley Cup playoff defeat the Canucks have suffered.

In the end, the tens of thousands of fans who crowded downtown hoping to participate in the biggest victory celebration in the city's history instead stood in mute testimony to the unprecedented dimensions of this loss.

The Bruins saved their first win on Vancouver ice in these finals for the most important game of the year. The Canucks tried to make a game of it but finally were no match for a bigger, grittier team playing in front of a vastly superior goaltender to their own. The better team won this Stanley Cup.

This had been no ordinary hockey season in the city of Vancouver. And this no common defeat for its NHL hockey team.

This was the year the Canucks were to slay all those many ghosts of their past. They had been the best team throughout the regular season, with the league's scoring champion – for the second year in a row. They wore the tag Stanley Cup favourites without trepidation; on the contrary, the Canucks wore it proudly.

Along the way something phenomenal occurred.

The city's hockey team put a death grip on the imagination and interests of just about everybody in the province. Those who had never been big Canucks boosters in the past got swept up in the optimism that the season generated. It didn't hurt that Vancouver had a team that people throughout the NHL were crowing about.

For the first time, thousands of Canucks supporters could be found in enemy rinks, thousands of kilometres away from the confines of Rogers Arena. This was the sort of thing that happened to the Montreal Canadiens and Toronto Maple Leafs – not the sad-sack Canucks.

And it wasn't just those whose Canadian and Canucks lineage dated back generations who fell in love with this team – it was people from the Punjab, who had never heard of hockey before this season. It was people from Shanghai, who discovered that to adapt to the customs and traditions of their new homeland, occasionally wearing a blue sweater with a menacing-looking whale on the front was something you needed to do.

Women supported the Canucks in numbers never seen before as well. And it wasn't in a isn't-Kevin-Bieksa-cute manner but in a what-the-hell-is-wrong-with-our-power-play-and-why-can't-Roberto-Luongo-close-his-five-hole way.

So what happened? What will Canucks fans be talking about for months, maybe years from now in emotional conversations about the Cup that got away?

Certainly Mr. Luongo's performance in the finals will be analyzed to death. While he played well enough at home in these playoffs – although he was nothing special in Game 7 – the game he brought to Boston was horrific. His future with the club will be the topic du jour in Vancouver this summer, even though he's likely not going anywhere.

And then there were the injuries.

Every team that makes it to the Cup final is battling injuries, or playing without someone who would have helped their chances. Vancouver had more than their fair share.

Forwards Mikael Samuelsson and Mason Raymond, defencemen Dan Hamhuis and Aaron Rome all were eventually lost to the team during the playoffs and not available for the biggest game of the season. Other Canucks players were hiding injuries the severity of which wouldn't be known until afterward. (So were the Boston players.)

In the end, the Vancouver Canucks on the ice Wednesday looked like an ersatz version of the one that steamrolled teams with ease during the regular season. You could almost feel their Cup chances seeping out of them as the finals wore on.

The confidence of their fans began to slowly evaporate, too, although they tried not to let on.

After covering the finals in Vancouver for a few days, Boston Globe columnist Bob Ryan couldn't help notice the near messianic devotion of the home team's followers. The signs, the crowds, the blue jerseys everywhere.

"Boston fans may want it [the Cup]" Mr. Ryan observed. "These people need it."

He was right. But now they're going to have to wait at least another year for a chance. And maybe much, much longer. 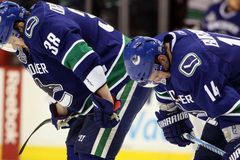 Canucks shoot themselves in the foot
June 15, 2011 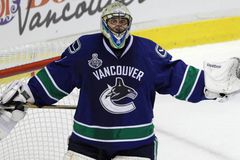 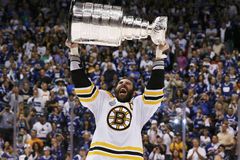