Tom Renney was the last man to coach a Canadian men's Olympic hockey team before NHL players took the reins. It was 1994 in Lillehammer, Norway, an event that produced a memorable gold-medal final. Paul Kariya and Peter Forsberg competed in a heart-stopping shootout duel. Corey Hirsch was heroic in goal for Canada. When Sweden ultimately won the gold medal, the championship was so well-received it was commemorated on a Swedish postage stamp.

Now, a generation later, Renney is the president of Hockey Canada and may be facing a familiar yesteryear scenario.

Increasingly, it is looking as though the stalemate among the International Olympic Committee, the International Ice Hockey Federation and the National Hockey League over the latter's Olympic participation will drag on – and eventually oblige all national federations to fill out their men's Olympic hockey rosters with non-NHL players.

If that happens, Hockey Canada is getting ready – just in case.

Back in the fall, Hockey Canada hatched a tentative Plan B, hiring former NHL goalie and two-time Olympian Sean Burke to oversee its participation in two European hockey tournaments – the Deutschland Cup and the Spengler Cup – with a view to evaluating Canadian hockey talent playing abroad.

Renney says he remains in favour of best-on-best competition at the Olympics, but isn't shrinking from the challenge if it goes the other way.

"We were good in 1980 [without NHL players] and, ultimately, we got ourselves to the point where we were winning silver and within millimetres and milliseconds of gold medals in 1992 and 1994," Renney said. "Those were special teams and special times. So there's a bit of me saying: 'whatever happens, we'll be ready to go – and we will be.'"

Complicating matters for Canada is the number of different recruiting scenarios that could present themselves if the NHL stays home.

Right now, Burke's scouting mission focused mostly on Canadians playing professionally in Europe, most of them in either Russia or Switzerland.

But both he and Renney wonder, might the Olympic team have access to AHL players, those NHL prospects on the cusp of playing in the league? Would any Canadians playing college hockey be available? How about top juniors? If Nolan Patrick didn't make it directly to the NHL as the projected No. 1 pick of the 2017 NHL entry draft, would he be interested in following in the footsteps of his uncle James Patrick, a member of Canada's 1984 Olympic team?

All good questions, said Renney, for which there are no ready answers.

Unlike 1994 and the four men's Olympic teams before Lillehammer, Canada will not centralize a men's team in Calgary, with a six-month lead time to get ready, said Renney, because the costs would be too prohibitive.

Instead, Canada is tentatively planning to hold a summer evaluation camp, and then bring those players together for multiple international competitions before the 2018 Olympics in the hope of developing the necessary chemistry. The team could be a work in progress until the 11th hour.

An Olympics without NHL players will shift the favourite's role to Russia, as was the case when Renney and Dave King were icing teams of "amateurs" against the powerful Soviet Union teams of a previous generation.

According to figures supplied by the Elias Sports Bureau, among the 934 players to have played at least one NHL game through Wednesday, Russia ranks fourth by nationality behind Canada (435), the United States (246) and Sweden (82) and just ahead of Finland (35) and the Czech Republic (34).

In effect, the Russians will lose access to far fewer players at the top end of its player pool – and would have available the likes of Ilya Kovalchuk, Pavel Datsyuk, Slava Voynov and others playing in the KHL.

Canada, by contrast, would lose a far greater number of its most accomplished players and thus would have to plumb deeper into the mid-echelon of its talent pool.

Ultimately, it could evolve into the sort of David vs. Goliath battle that characterized King's three terms as Olympic coach – and Burke's time as a player in the national program, where he is the career leader in games played (35) and wins (21) at the IIHF world championships.

Burke was also part of the managerial teams that won back-to-back men's hockey world championship gold medals in 2015 and 2016 and would be the logical candidate to act as Canada's 2018 Olympic general manager if the NHL bowed out.

In his current role with Hockey Canada, Burke said he was reminded once again of how important it is to players to play for their country.

"We take it for granted sometimes," Burke said. "We've seen [Wayne] Gretzky, [Mario] Lemieux and [Sidney] Crosby in that Canadian jersey and remember the events they've played in. But at the Deutschland Cup, which we don't even go to every year, I saw how important it was, not just for the players, but also for their families and their parents – to see their kids wear that Canada jersey. So that really resonated for me.

"It's been an interesting assignment – to get to know the Canadian players from around the world who aren't in the NHL but are still pretty good hockey players."

One thing Burke is sure of: No matter who might be playing on the men's Olympic hockey team in 2018, the country will rally around them.

"A year out, sure, people may say they want the NHL players there," Burke said. "But when that event starts, it is still the Olympics. It is still the greatest sporting event in the world. You're representing not only your own sport but you're representing your country alongside other athletes in other sports, too. It takes on a totally different meaning.

"How many people would say, 'I'm not watching the Olympic hockey tournament because it's not the NHL guys.' My guess is, hardly anybody. They'd say, 'if Canada's in the gold-medal game in the Olympics, I want to watch it.' It won't matter who is playing." 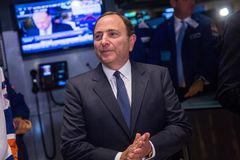