On one shift, early in his second NHL game in late October, Troy Stecher put on a quiet display of confidence at both ends of the ice.

It started when the 5-foot-10 Vancouver Canucks defenceman collected the puck in his team's zone and fired a tape-to-tape pass 70 feet up and across the ice to spark an offensive push against the Edmonton Oilers.

At the end, pressure came back: Connor McDavid was flying toward the Vancouver net and Stecher rode him to the outside, snuffing the threat, and checked him into the boards. When the puck emerged from the scrum, Stecher snagged it and put it safely up the ice for a line change.

Stecher grew up in the Vancouver suburbs and, given his short stature, went undrafted by the National Hockey League as a teenager. As a 22-year-old rookie, after a strong collegiate career, he has quickly become a key part of the Canucks roster.

Stecher's arrival is good fortune in bad times. The Canucks are again dealing with injuries to the team's best defenders. And they are again mired at the bottom of the NHL standings, now home after another difficult road trip.

Twenty-one games into his career, Stecher is already one of the best Canucks, among the team's leading puck-possession players. He plays 21 minutes a game, near the top of other rookie defencemen around the league.

Most impressive is his ability to generate shots on goal. His average of three a game is among the best of all defencemen in the league.

Stecher has likened his approach to leaping from college to the NHL to that of jumping in a swimming pool, cannonball-style. The ethos is: Go for it. The mindset jibes with the numerous young, fast, attacking players who have emerged in the NHL.

He's a defenceman but his instinct is to drive the offence.

"It's a lot more fun playing offence than defence, so sometimes I don't really want to look for a pass if I have the lane. I just want to skate it out," said Stecher. "One of my strongest assets is my feet, my ability to skate – I think it has to be, with my height."

The NHL is not a welcoming place for 5-foot-10 defenceman: The average D-man stands 6-foot-2.

But while only a fraction of defenders who make it are Stecher's height, the ones who do tend to be potent players, offensively and defensively, guys such Brian Rafalski and Brian Campbell.

Stecher's coaches, from junior through college to the NHL, all cite his fervent work ethic. A resolute confidence has carried him.

"When he doesn't have the puck, he wants the puck," said Brad Berry, hockey coach at the University of North Dakota, where Stecher played three seasons and last spring helped win a national title. "He'll go into a corner with a guy bigger than him – and I've seen it at the NHL level too – and he'll come out with the puck. That kind of defies all odds but he seems to do that on a consistent basis. That tells you about his personality."

Fred Harbinson's first encounter with Stecher, when the defenceman was 15, was much the same. Harbinson, coach of the Junior A Penticton Vees, met Stecher and his dad for breakfast, after his scouts had told him about the defenceman's potential.

"He looked like he was 12 years old," remembered Harbinson of the breakfast, when he tried to convince the teenager that he needed another year in midget hockey.

The next day, seeing him on the ice, Harbinson agreed: "That kid's going to make our team."

After three seasons in Penticton, Stecher was the only player in his North Dakota freshman class who hadn't been drafted by the NHL. In his sophomore year, a few NHL teams took interest. Last season, as a junior, his offensive output more than doubled and about 20 teams came calling.

There were promises of a guaranteed spot on opening-night rosters.

In Vancouver, he saw opportunity and knew he had to fight for it. Playing for the team he grew up loving was a plus. Signing him, followed by his rapid success, is a win for the Canucks' beleaguered management.

Stecher had a strong preseason but started the year in the American Hockey League. It didn't take him long to get back. He was named third star in his first NHL game.

It was in Junior A, under the guidance of Harbinson, that Stecher began to believe he could reach the NHL.

"People were always doubting me because of my size," Stecher said. "He didn't care about how big I was. He cared about heart." 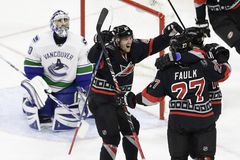 Canucks are in for a big change, but no one knows exactly what kind
November 18, 2016
Vancouver Canucks’ strategy: Grind it out and hope to win
October 19, 2016 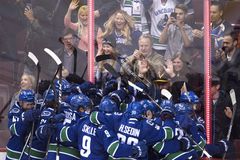