One thousand kids, aged 4 to 8, who every year for the past four years have received full hockey equipment paid for by the Pittsburgh Penguins, their 25-year-old captain and several sponsors.

The numbers may sound like a drop in the bucket in Canada, where one in 10 kids are already playing, but they matter in a place like Pittsburgh, where even when the Penguins have ruled, the game has never really flourished at the minor-hockey level.

But the combined effect of Crosby and Co. providing free gear and instruction has brought a quick and dramatic change that landscape in this football-crazed city, to the point that there are now 120-per-cent more children aged 10 and under playing in Western Pennsylvania than even five years earlier.

A region with fewer than four million people, in other words, has accounted for 15 per cent of the growth in youth hockey in the United States, outpacing every other state.

It's a shift that has surprised even Crosby and the Penguins, who set out together on this path early in his career.

It was a way to both give back to the community and grow their fan base.

"This is the new, Sidney Crosby, generation," said Penguins president David Morehouse, a Pittsburgh native who made the transition from politics to pucks when club owner Ron Burkle hired him in 2004 to work on the franchise's push for a new arena. "These are the kids that started playing when we came out of the last lockout, and some of those kids got the free equipment.

"It was funny. After the world juniors [in which four Pittsburgh products contributed to a gold medal for the United States] Sid make a joke that he's going to have to think about continuing to provide free equipment down here."

Crosby laughs when asked about his role in "sabotaging" Canada's future in the tournament he won silver and gold in back in 2004 and 2005.

"You saw those four guys playing," Crosby said in reference to locals John Gibson, J.T. Miller, Riley Barber and Vincent Trocheck. "So I was thinking that some of those little kids [in the Little Penguins program] might be on a future American team."

That doesn't sound farfetched, especially given the organization's grow-the-game initiatives go well beyond the 4,200 kids who have received equipment.

The Penguins have hired four full-time staffers, including one high-level exec in Rick Hixon – chosen executive director of strategic planning in 2010 – dedicated mainly to minor-hockey growth.

The team also supplies free sticks to every elementary school in the region and has begun constructing ball hockey facilities as it tries to compete with football and baseball for young athletes' attention.

The Penguins players, meanwhile, see evidence of the shifting hockey culture all around them, even after returning to Pittsburgh after eight months away because of the lockout.

"Coming back this year, there's a bunch of big, big national hockey stores around," Penguins defenceman Brooks Orpik said, noting that Pittsburgh's minor-hockey teams weren't nearly as competitive when he was growing up in the Buffalo area as they are now. "If they're coming to town, you know youth hockey is getting a lot bigger.

"It's night and day [from 20 years ago]. What this organization is doing for youth hockey has a lot to do with that."

Pascal Dupuis, another Penguins veteran, even goes so far as to compare the city's burgeoning hockey scene to his hometown of Laval, Que.

He spent the lockout coaching a team with his six-year-old son on it and was blown away by the level of instruction available, in part because of all the former Penguins living in the area and now working at local rinks.

"I had a blast," Dupuis said. "It feels like if I was back in Quebec, the way it's run around here."

Perhaps the most surprising aspect of the Penguins' investment in minor hockey, however, is that it comes at at time when it is likely largely unnecessary.

Pittsburgh is in the midst of a love-in with its NHL team. The Penguins have sold out 263 consecutive home games and increase their local TV ratings sevenfold to the point they now lead U.S. franchises by a fairly wide margin.

It's a long, long way from the bankruptcy era of 2003-04 and has obviously been fuelled by highly drafted stars such as Crosby and Evgeni Malkin and their Stanley Cup win in 2009.

But, knowing first hand that being on top can be fleeting and that stars – such as Hall of Famer turned co-owner Mario Lemieux – don't last forever, Morehouse has pushed for the Penguins to build their brand and the game of hockey even more while they're on top.

His background in politics has helped, too. One of his first undertakings as team president was to do market research to find out how fans felt about the franchise, something that helped point the organization toward getting more kids playing the game.

In a relatively small city, where the NFL's Steelers have traditionally dominated, many sports fans who weren't hockey fans explained in the surveys they simply didn't understand or appreciate the game because they didn't grow up immersed in it.

Rather than viewing that as a barrier, Morehouse wanted to tackle the challenge by investing money in "putting sticks in as many kids' hands as possible" in order to get them hooked on hockey.

As simple as that sounds, it's also a leap of faith that investing hundreds of thousands of dollars now when the team is already successful will be worth it a decade or more down the road.

After seeing the early fruits of the endeavour, however, Morehouse has begun pushing at the league level for the creation of a similar program to expand the sport nationwide.

"I think we're just scratching the surface of things now," he said.

Crosby's dedication to the program, meanwhile, was tested during the lockout.

Despite the fact players weren't supposed to have any contact with team staff, he still quietly found a way to keep contributing, ensuring that the 2012-13 edition of the Little Penguins would be able to play.

"Registration has been full the last three or four years," Crosby said, putting it mildly given staff say the program now fills up within minutes. "It's gradually gotten bigger, too."

"This was one of the first things he asked us about," Morehouse said. "He wanted to do something for kids that couldn't afford to play. So it's his program. Every kid gets a jersey, and it's No.87 so we don't have kids fighting over 87.

"He doesn't like to talk about it a whole lot. He just likes to do it. He just quietly does what he can to help."

Crosby not surprised to see former coach Therrien back on top with Habs
March 2, 2013 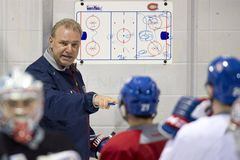 Crosby steps up with two goals as Pens hold off Bolts
February 24, 2013 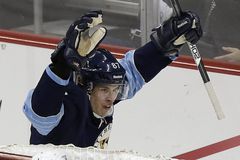 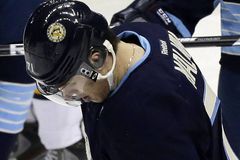