It was a March Break Thursday morning at the Markham Village Community Centre, as kids nosed up to the glass overlooking the ice surface where they had just finished their hockey camp. A team full of towering women was now on that same ice, skating at top speeds, making crisp passes, and letting slap shots fly.

"Is this an Olympic team?" one kid hollered out.

The team was Kunlun Red Star (KRS), one of two Chinese clubs added this season to the Canadian Women's Hockey League in an effort to grow the female game in China. The squad is a fascinating blend of women from China's national team, Olympians from the United States and Europe, and elite North American players of Chinese heritage who may be eligible to play for China at the 2022 Olympics.

Despite travel challenges and growing pains in their debut season, KRS finished in second place in the seven-team women's pro league with a 21-6-1 record, just two points behind the reigning CWHL champs, Les Canadiennes de Montreal. That earned KRS a best-of-three semi-final playoff series this weekend with the No. 3-seeded Calgary Inferno. The winner will play next week for the Clarkson Cup.

Their final 90-minute practice before the playoffs was speckled with examples of mentorship moments between the Chinese and their more experienced teammates. It's the very core of what this expansion team project is about as China (No. 19 in the IIHF women's world hockey rankings) races to improve before playing host to the 2022 Beijing Winter Olympics, where it hopes to earn a medal.

The KRS star goalie, two-time Finnish Olympic bronze medalist Noora Raty, huddled at every opportunity with Chinese backup goalies Siye He and Yuqing Wang to give them pointers. This year's CWHL scoring champion, Kelli Stack, an Olympic silver medalist with the United States in 2010 and 2014, offered fellow forwards some shooting and positional tips.

"You can see that they're starting to understand hockey plays and learning to be in the right place at the right time," said Stack, who was a surprising cut from the 2018 U.S Olympic team. "And when to pass, when to shoot, how to go to the net with your stick on the ice – things best picked up through lots and lots of repetition.

"The Chinese players are getting leaner and stronger, they're eating better, learning how to cope with travel. If we could win the Clarkson Cup, it would show them first-hand how to be winners, and that would mean a lot. I bet they'd throw our team quite a party in China."

The roster includes six women who have spent time with the U.S. national team (who count as the team's imports), along with one American and two Canadians who played NCAA hockey and have Chinese heritage (considered non-imports). These women are each paired as mentors with one of their 12 Chinese teammates.

"They have showed us how to enjoy hockey, also how to get stronger on the mental side, share the puck, share everything," said KRS forward Baiwei Yu, also the captain of China's national team. "Off the ice, we have learned to eat good breakfasts, how to build leg skating power, how to have more power in shooting. The Chinese players, we feel much more improved from before."

Their American coach, Digit Murphy, who won two Clarkson Cups with the Boston Blades, has assembled the rosters and staff, incorporating Chinese women in jobs wherever possible. She yelled out instructions in English during the practice, and her assistant coach, Rui Sun, offered Chinese translations when needed.

"I think this team has persevered really well through adversity," Murphy said. "The language can be a barrier. The Chinese women are still working to catch up to the speed of the game, so they aren't ready for as many game minutes as I'd like for them just yet. But they've improved leaps and bounds, they're reading the game so much better, and there is a lot of love here as we bring the cultures together. We're helping build a hockey power that hopefully will rival team Canada and Team USA someday."

Of the 95 goals KRS scored this season, seven were from Chinese players. Those goals, though, were each momentous for the group. Stack says she was emotional to see the player she mentors, Wen Lu, score her first CWHL goal.

"I spend time with her daily, skating, shooting, dangling, checking her nutrition, making sure she's improving every day; it's something I've never done before but it's been an incredible experience," Stack said. "She's working so hard. When she scored her first goal in China against Montreal, I went absolutely crazy on the bench."

Since KRS and the other Chinese CWHL club – the Vanke Rays, who finished fifth at 14-13-1 and missed the playoffs – both have Chinese national team players, they hoped to travel together while in North America. That would have let them assemble as Team China between CWHL games and play exhibition games against Canadian or U.S. clubs or university teams. But the complexities of the CWHL schedule had Vanke and KRS most often in two different North American cities, so some extra-development opportunities were missed.

To limit the number of trips between continents, the two Chinese teams spent lengthy stretches of time in North America or China – packing several games into each stretch. Each of the other five CWHL teams made a single trip to China, staying for more than a week and playing both KRS and Vanke twice.

KRS, the top seed in this weekend's playoff series, will be the home team against Calgary at the Angus Glen Community Centre in Markham. KRS finished the regular season in Boston, so this alleviates two teams going back to China before next week's Clarkson Cup in Toronto.

"The travel was probably the biggest learning experience for us – what is fair to the players when you're dealing with a 15-hour flight and a 13-hour time difference, and you want to provide them enough time to adjust and be able to play well, but not make the trips too long because many players also have full-time jobs," said CWHL commissioner Brenda Andress.

"We will get feedback about it from all of our teams. The Chinese opened their arms to all the teams when they visited, gave them a great cultural experience."

That travel was financed by the Chinese hockey ownership group, also called KRS. It was founded last year by Billy Ngok, the founder of China Environmental Energy Holdings, an energy trading firm in Hong Kong, in partnership with the Chinese government, and Alex Zhao, a banking executive. KRS, determined to build hockey in China, operates the two CWHL teams, as well as two under-18 squads, and a men's pro team in Beijing that plays in the Kontinental Hockey League.

"It's been a great lively experiment," said Scotty MacPherson, a Toronto native and former NCAA hockey coach who had a hand in founding the KHL and now works as International Development Director for KRS. "If they advance past this weekend, Billy and Alex hope to come to Toronto for the Clarkson Cup. They love hockey and really care about their country. They don't want to see the status quo in the Olympics for China in 2022. They want China on the podium."

The CWHL was without its Olympic stars from Canada and the United States for most of this season as they prepared for the Pyeongchang Games. Many are returning now for the playoffs.

Attendance at most CWHL games in North America this year averaged a couple hundred fans each, with more than 1,000 attending the two final regular-season games in Montreal. In China, at the newly renovated Shenzhen Universiade Sports Centre in the subtropical Chinese city outside Hong Kong, CWHL games averaged 2,000 fans.

Online streams of the games have garnered between 10,000 to 40,000 viewers in China for each game, with 110,000 watching the season debut. Inside Canada, streams have garnered from 1,000 to 4,000 viewers. The CWHL says it hopes to enhance its efforts to reach out to the Chinese communities inside North America, hoping to draw them to games. A playoff game in Markham – with its large Asian population – offers a good opportunity.

If KRS gets past Calgary, it would play either Montreal or Markham for the Clarkson Cup on March 25 at Ricoh Colliseum.

"I won it twice in Boston, but to win it for China and for KRS, that to me would be the pinnacle," Murphy said. "When I retired in 2014 I said I don't need to win anymore championships. To bring me back into hockey, it had to be something big. I was thrilled to be part of creating opportunities for women in China as my last chapter." 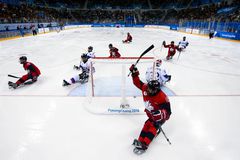 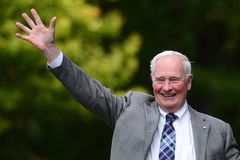