So the Carolina Hurricanes are heating up.

And the latest victims of their stifling defensive play are the Toronto Maple Leafs.

The 'Canes won their fifth game in a row on Tuesday night, downing Toronto 2-1 on the strength of goals from Jeff Skinner and former Leaf Viktor Stalberg, who tore in alone on a shorthanded breakaway after picking off an errant Tyler Bozak pass.

This wasn't a memorable game. It was Carolina in front of a sleepy crowd at Air Canada Centre on a Tuesday.

But there were elements worth noting for Maple Leafs fans anxious to see their team improve from pretender to contender in the coming years. After all, the Leafs and Hurricanes offer interesting comparisons. They're two of the three or four youngest teams in the league, depending on their lineups. They're both in the midst of rebuilds, with several recent top-10 draft picks in the mix.

One is the richest franchise in the league. The other is perhaps the poorest, with the NHL's lowest payroll, ownership woes and relocation rumours. They're also two teams that have gone big on analytics, with Carolina hiring Harvard grad Eric Tulsky a couple years ago and the Leafs leaning on assistant general manager Kyle Dubas and his quants in that department. (Which might explain why Tuesday's game resembled a chess match at times.)

What's of note in comparing their rebuilds, though, is the Hurricanes strength is on the blueline and the Leafs is clearly up front. The Hurricanes biggest asset has been built by making some really nice selections deeper in the draft: Justin Faulk in the second round, Brett Pesce in the third and Jaccob Slavin in the fourth in 2010, 2012 and 2013. Among others.

Toronto's new-found power is coming, instead, from its high picks: Auston Matthews (first over all), Mitch Marner (fourth) and William Nylander (eighth).

What's the better way to build a top NHL team? That's a fair question. It's certainly one the Leafs wrestled with when their choices in the 2015 draft were to take Marner or opt for a defenceman such as Noah Hanifin (who Carolina selected fifth) or Zach Werenski (who went eighth to Columbus and is now a front-runner rookie of the year candidate).

Toronto had interest in all three, but the belief is that assistant GM slash superscout Mark Hunter really wanted Marner – and given his 16 points in 19 games to start this season, that appears to be a fine call.

Certainly no one in Toronto is complaining.

"They got a real good player in him," Leafs coach Mike Babcock said of Hanifin, who is still on the Hurricanes' third pair but remains one of the five youngest defencemen in the league. "Obviously we made the decision to go with Mitch. They like their guy, and we like our guy."

And they should. You can make a credible argument that Marner has been the Leafs best player as they near the quarter-way mark, and few were predicting that of the sleight 19 year old. But what's also clear is that Toronto desperately needs help on D. Their desire to play a dominant possession game has been hampered by the fact their second D pair has often included Matt Hunwick or Roman Polak or both (as was the case in Tuesday's game).

That pair controls the puck roughly 35 per cent of the time – making them one of the weakest second units in the league. Slavin-Pesce, meanwhile, might be the best in that department in the NHL: better than 55 per cent when they're on the ice together.

Against the Leafs, those two were at nearly 70 per cent. Hunwick-Polak were getting filled in again, and the contrast in styles in terms of how they exited the zone was dramatic.

Toronto and Carolina have had very similar starts, record-wise, this year in the Eastern Conference. They're both battling for wild-card spots. But the biggest impediment to the 'Canes having a better, more playoff-like point total has been their goaltending, and of late, Cam Ward has been excellent. If that continues – and, yes, it's a big if given his recent seasons – this is a team that will surprise and do very well.

They're extremely well coached by Bill Peters – one of many Babcock disciples around the league – and they have some pieces that the Leafs lack, even if they're not household names. What they don't have is any game breakers, and it's worth wondering whether or not they might make an ideal trade partner for Toronto, when what looks like an inevitable forward-for-D trade happens.

On Tuesday, anyway, the 'Canes did a nice job of showcasing that it's not always high draft picks, big names and big point totals that get the job done.

Sometimes, it's savvy defence. Sometimes, it's slick passing, positioning and control of the neutral zone. And even a young team can nail that down, if it has the right personnel.

Once struggling, Brandon Sutter hits his stride with Canucks
November 22, 2016 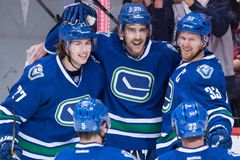 Draisaitl, Talbot lead Edmonton Oilers to 5-0 win over Chicago Blackhawks
November 21, 2016
Patrik Laine is looking more like Alex Ovechkin every day
November 21, 2016
Follow James Mirtle on Twitter @mirtle
Report an error Editorial code of conduct
Due to technical reasons, we have temporarily removed commenting from our articles. We hope to have this fixed soon. Thank you for your patience. If you are looking to give feedback on our new site, please send it along to feedback@globeandmail.com. If you want to write a letter to the editor, please forward to letters@globeandmail.com.
Comments