Although it may have cost him the season, Jason Spezza says it was the only option.

The Ottawa Senators centre spoke to the media for the first time Friday morning since undergoing back surgery for a herniated disc a week ago, and admitted he had no other choice.

"It was really bad," he said. "It got to the point where there was no way I was going to be able to play, so it makes it frustrating.

"But there wasn't really an option once we got down to it."

The 29-year-old says that once the pain started he struggled to find any kind of relief, and things finally culminated in a game against the Pittsburgh Penguins on Jan. 27.

"I started to feel it a little bit towards the end of training camp and the start of the season and then it got out of control probably after the second game of the season," Spezza said.

For Spezza, who says he felt almost instant relief following the surgery, back issues are nothing new. He had surgery following the 2006 season, but continued to miss games the following year due to recurring back pain, and has always had to be very cognizant of the issue and undergo ongoing treatment to deal with flare-ups.

"I do play hockey for a living and it's not easy on the body, but the goal is to strengthen it and have it fixed and not be an issue moving forward. If there's a doctor out there who can give me that guarantee, or I can give you that guarantee I'd love to have it."

Spezza didn't want to commit to a return date, but it's obvious he hopes to return before the end of the season.

"You always aim to push your rehab and you can be a little more aggressive with things, but (Gerry Townend, the head athletic therapist) already talked to me about making sure that we're doing things right and not getting too carried away," said Spezza. "The goal is to get back by the end of the season and to hopefully help us to the end of the year and the playoffs."

The first couple of weeks following surgery are a rest and recovery period and then if things look good Spezza should be able to start with his rehab late next week.

Despite having undergone two surgeries Spezza remains hopeful that this won't be an ongoing problem, and more importantly, a detriment to the longevity of his career.

"Going forward it's definitely going to be a focus for me. When I plan my summer training, when I do my workouts and when I'm practising, I have to take it into consideration.

"But there's been a lot of guys who have played with back problems and gotten over it, so I'm hoping to be one of those guys."

Notes: The Senators re-assigned D Mark Borowiecki to the Binghamton Senators of the AHL. Borowiecki was pointless in the six games he played in Ottawa. ... G Craig Anderson was given the day off to rest, but Senators coach Paul MacLean didn't rule out giving Ben Bishop the start tomorrow afternoon against the visiting Winnipeg Jets. ... Anderson has played the last seven straight, while Bishop has made just one start this season, a 6-4 loss to the Tampa Bay Lightning. ... D Mike Lundin was given the day off as his wife was giving birth to twins today. ... LW Guillaume Latendresse skated on his own this morning and continues to recover from whiplash.

Jets looking for revenge in rematch with Senators
February 8, 2013 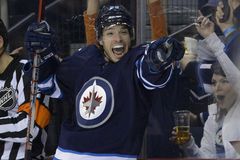 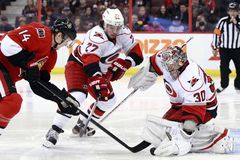 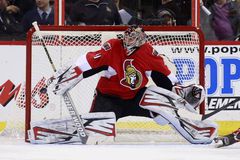 Craig Anderson scintillating between the pipes for Senators
February 4, 2013 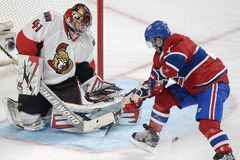