We were talking about longevity and career plans and how, in an era when youth is being served all around the NHL, there are still a few holdouts here and there – a Jaromir Jagr, a Shane Doan and yes even a Joe Thornton – who defy the years and the era they play in and still find a way to succeed.

The one common factor is their great love of the game. You ask Thornton why, at the age of 36, he is still thriving in the NHL and the answer comes easily: there isn't another thing he'd rather be doing. After all these years, the life of a professional athlete – competing against his peers on the ice, enjoying the camaraderie of the dressing room off the ice – still holds a certain little-boy appeal.

Thornton and Jagr share the same genuine joie de vivre when it comes to playing the game, which is what inspires them to keep doing it long after many of their peers have stepped aside.

"I don't think you play the game at that level at their ages unless you genuinely love the game," said Sharks' coach Peter DeBoer, who also coached Jagr for most of two years with the New Jersey Devils. "Joe loves everything about the game. He's the first guy at the rink on game days. He's preparing 3 1/2 hours before the game starts. Every time we have an optional practice, he's on the ice, working on some part of his game.

"The one difference I see is Jagr doesn't have a wife or kids, so hockey's 24-7 for him. Joe has only two loves in his life – hockey and his family – and I don't see that fire going out any time soon."

Thornton is 6-foot-4, 220 pounds and Jagr 6-foot-3, 230, and both have that same wide wing span, which allows them to protect the puck along the boards from all manner of pressure.

At a time when teams close fast on the puck defensively, there is a calmness to their respective games that allows them to hold the puck just the split second longer that's needed to find the open man. Thornton, especially, can then thread the needle with a seeing-eye pass better than virtually anyone in the game.

It's what makes the San Jose Sharks' power play so effective and a big reason why Thornton is in the midst of one of his hottest scoring stretches in recent years.

Through Thursday, he had collected a point in 22 of his past 24 games – 31 points in all, including eight goals. According to the Elias Sports Bureau, since that streak started in mid-December, only Sidney Crosby has scored more points than Thornton (34 for Crosby; Thornton and the Chicago Blackhawks' Patrick Kane were next with 31 points each).

Earlier this week, Thornton collected his 935th career assist to move past Al MacInnis into 15th place on the career assists list. It also marks a time in which the Sharks have moved into second place in the Pacific Division, nicely positioned to make the playoffs in the Western Conference.

When the Sharks missed the postseason last year, it ended a streak of 10 consecutive years in the playoffs, the second longest in the NHL behind the Detroit Red Wings. That level of consistency is unusual for the salary-cap era, but the expectation was that their time might have passed; that San Jose's slide would continue, given how the core group has been mostly the same for a long time now and was getting on in years.

No one is giving San Jose much of a chance to make a run, even if it makes the playoffs, even though it was only six points out of first place going into Friday's action and is gradually making up ground on the first-place Los Angeles Kings.

But no matter what the external perception may be, Thornton says: "We feel we can play against anybody, and that's a good feeling to have. The way Jonesy's been playing, we have a great feeling in this locker room. We feel we have our home game under control now [points in eight consecutive games]. It took a while, but we feel really confident at home and our road record speaks for itself.

During Logan Couture's absence, DeBoer played young Czech forward Tomas Hertl at centre, but since his return, Hertl has moved up to play with Thornton and Joe Pavelski, where the chemistry on the line is working again.

"I feel good, yeah," said Thornton, who doesn't much like talking about his own play. "Our line's been clicking. Ever since Tomas really got with our line, I think he's added a little extra boost to us. Pav's been playing real good, Tomas has been playing real good and we're working hard for one another and that's very important for success."

Nor would it surprise anyone if Thornton, at the end of his NHL playing days, gave Europe a shot for a time. Thornton met his wife during the 2004 NHL lockout playing in Davos and he went back to play in Switzerland 10 years later during the 2012-13 work stoppage.

Mostly, though, Thornton is enjoying life. He competes harder than most people give him credit for, that happy-go-lucky attitude toward life masking a desire to win and compete that not everybody sees or appreciates.

"I think one of our old owners said it best about Joe at our 25th-anniversary celebration," DeBoer said. "Never has he seen a guy work so hard to make the game look so easy." 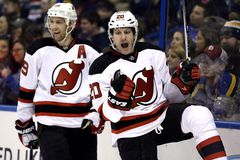 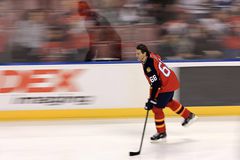 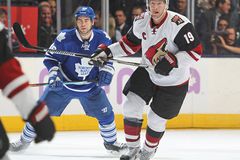