The bad old days in Boston, when the Bruins struggled to escape the early rounds of the playoffs, and coach Pat Burns was in his young players' ears, trying to get as much out of them as possible.

What Gill recalls the most is an enduring image of Joe Thornton, then still a kid, joking and having fun, even in some ugly postseason wars.

"He'd laugh through a tough situation," said Gill, who broke into the NHL the same year as an 18-year-old Thornton with the 1997-98 Bruins. "Pat would give him hell and he'd take it and kind of shrug it off and get back to work. He's always been a 'you're not going to ruin my fun' kind of guy.

"Joe is definitely one of those guys that I'm rooting for."

That sentiment is everywhere in the NHL these days, from everyone that crossed paths with "Jumbo" over his 18 seasons. Thornton, now 36, is deep in the playoffs with the San Jose Sharks and, given the way they're playing in their third-round series with the St. Louis Blues, this could be his best – and perhaps last – chance at that elusive Stanley Cup.

Thornton added to his impressive postseason in the Sharks' Game 3 win on Thursday with two more assists, including a highlight-reel 40-foot saucer pass to Tomas Hertl behind the net on their third goal. Thornton now has 10 assists in these playoffs, good for third in the NHL before Friday's game.

These playoffs have also been a further confirmation of Thornton's remarkable talents. He has used his enormous wingspan to cradle the puck so well, maintaining time in the zone and helping San Jose dominate possession. He has run a dominant power play better than perhaps anyone, too, especially with his familiarity with his long-time Sharks teammates.

But Thornton is also a contradiction in the sports world. He is a rare combination of superlative talent and a laid-back, easy demeanour. He is not the ultraintense Jonathan Toews. He is not Sidney Crosby. He does not eat gravel for breakfast.

He is – as witnessed at the end of Game 2's win in St. Louis earlier this week – the old guy in the crazy beard dancing on the bench next to some young fans.

It's a mix that has confounded some in hockey, including multiple coaches and the Bruins, who shipped him to California more than a decade ago and watched him win the Art Ross and Hart trophies that same season.

Thornton has hardly slowed since, piling up 887 points in 835 games overall with the Sharks, including a remarkable 82 this season – tied for fourth in NHL scoring – despite the fact he was one of the 30 oldest players in the league. He now sits 13th in career assists and is closing fast in that category on legends such as Mario Lemieux, Gordie Howe and Adam Oates.

Those who know him well say he could be the next Jaromir Jagr and play – and play well – into his 40s.

Because Thornton hasn't won in the postseason, however, he remains the rare sure-fire Hall of Famer who goes underappreciated – and misunderstood – in some circles.

Just not by the coaches in this series.

"What you find out in working with him is how competitive he is and how smart he is," said Blues coach Ken Hitchcock, who has had Thornton with Team Canada three times. "He might be one of the smartest players in the league – and maybe in the history of the league. He's been at it a long time. He's still an impact player every night."

"If this guy's playing in Toronto or Montreal or New York or one of those markets, he's a living legend," Sharks coach Peter DeBoer said. "He's that good."

It wasn't long ago that it appeared Thornton's time with the Sharks was headed for an ugly divorce instead of the franchise's first finals berth. Last March, with their season in doubt, he made headlines around the league when he called out general manager Doug Wilson, saying that he needed to "just shut his mouth."

That was the culmination more than a year of frustrations. Thornton was stripped of the captain's C in 2014 – now worn by linemate Joe Pavelski – and the Sharks sputtered through last season en route to missing the playoffs for the first time in 12 years.

They won only six of their final 14 games after Thornton's unusual outburst, which spoke more to underlying tensions on the team than anything.

For a time, there was trade talk, and Wilson mused about the Sharks being in need of a rebuild and if his veterans would want to be part of that process. But Thornton and long-time teammate Patrick Marleau both had no-movement clauses on their three-year deals and weren't budging.

A year later, the relationship between Wilson – who declined comment because of the ongoing playoff series – and Thornton has been mended. The Sharks ultimately didn't rebuild and instead retooled. They've benefited hugely from Wilson's strong off-season, when he added goaltender Martin Jones, defenceman Paul Martin and forward Joel Ward to reinforce a longstanding core.

The Sharks' improvement in the standings this season was modest – only nine points – but they are a deeper, more self-assured group. And the intense pressure that had come, year after year, with being a front-runner, is gone.

"He never wanted to leave," explained John Thornton, Joe's older brother and agent. "He made that obvious. He's very happy to be in San Jose. He's not a 'grass is greener' kind of guy. He could have went anywhere else, but he always felt the team in San Jose had just as good a shot as anybody. He'd rather win with his team. He wants to win with Patty. He wants to win with Logan [Couture], with Pavs. He really loves this team."

As for being misunderstood, Thornton's family has seen that from the beginning. "His whole life he's been very competitive at everything he does," John Thornton said. "He just happens to have fun while he's doing it so people view it as being too laid-back."

"I didn't have an appreciation for how honest a player he is," DeBoer said at one point earlier this week. "How hard this guy works away from the puck. How badly he wants to win."

Jumbo Joe's friends in the game, meanwhile, have seen that coming out in these playoffs. Their hope is that, this time, there's a different ending.

One where the goofy guy in the beard is dancing with the Cup.

"I think that's why being in San Jose worked out for him – he could focus on having fun and playing hockey," said Gill, who won his only Cup at age 34 with Pittsburgh in 2009. "He's always been a great player, but it seems like he's added a different level of skating and touch and everything. There's a little something extra in his game that you can see in the playoffs.

"It's been good to watch him. He looks good out there. Never mind the beard." 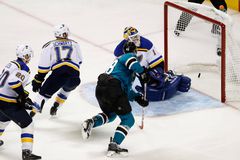 Whether the Blues or the Sharks go to the Stanley Cup final, they’ve earned it
May 16, 2018 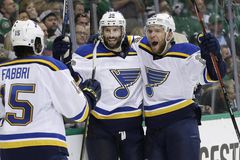