John Tortorella is the odds-on favourite to win the NHL coach of the year honours, which may surprise some people, but not John Davidson, who never lost faith. Davidson is the Columbus Blue Jackets' president of hockey operations and currently oversees the NHL's most unexpected early-season success story. The Blue Jackets entered Friday's game with the Calgary Flames with the fewest regulation losses in the league (five) and boast a winning percentage of better than .700, both at home and on the road.

When Tortorella was fired by Vancouver in 2014, one year into a five-year contract, there was some conjecture he might never coach again. The fact that he did get back in had a lot to do with a long-standing relationship with Davidson that dates back almost 20 years to when Tortorella was a New York Rangers assistant coach and Davidson worked for the Madison Square Garden Co. as a television colour commentator.

Davidson eventually got into the hockey business, first with St. Louis, then with Columbus, and in both cases helped to oversee turnarounds in organizations with massive credibility issues. But Davidson tested the limits of his own credibility by going to bat for Tortorella. Davidson trusted him – and more importantly, he trusted that Tortorella would not go off the deep end the way he had in previous NHL stops with the Rangers and the Canucks, which eventually created irreconcilable differences with the management and ownership of those teams.

Davidson remembered how Tortorella led the Tampa Bay Lightning to the 2004 Stanley Cup championship and how he got the Rangers to block shots so consistently. And he understood why so polarizing a figure had also earned the most NHL victories of any U.S.-born coach.

"John really wanted to coach again – he wanted one more kick at it," said Davidson. "We did extensive research and talked to the really good players and people he'd coached with – and there were zero negatives. I knew the man, which is different than the perception of him that's out there."

"Now, he's earned the perception – and we talked extensively about that too," he said. "But we wanted someone that's won, someone with a passion for the game and someone who wanted to prove he could still do it. He checked all the boxes."

Tortorella replaced Todd Richards seven games into last season and posted a 34-33-8 mark – not bad considering injuries limited goaltender Sergei Bobrovsky to 37 games. This year, Bobrovsky already has more wins (17) than he had all of last year and is doing for Columbus what Nikolai Khabibulin did for Tortorella in Tampa. Unlike that Lightning team, which also had the enormously talented trio of Vincent Lecavalier, Martin St. Louis and Brad Richards to rely on for offence, Columbus is being led offensively by Cam Atkinson, Nick Foligno and Alexander Wennberg – good players, but hardly household names. But Tortorella has cobbled a young, disparate group together and turned them into a cohesive unit. The team that finished last in the Metropolitan Division a year ago with 76 points – leaguewide only Edmonton and Vancouver had fewer – has rebounded in a big way.

"He had a lot of work to do with us," said Blue Jackets defenceman Jack Johnson. "Not just getting us to play the way he wants us to play, but to get the mentality of the team turned around, so you're going out to play with the mentality that you're expecting to win rather than hoping to win. Those things don't happen overnight.

Tortorella won the Jack Adams Award as coach of the year in 2004 and is currently two victories shy of 500 for his career. He describes himself as a more patient coach this time around and says that last year he was able to figure out who's who on the Blue Jackets and that, at the same time, the players were able to figure him out.

"I think we're much more comfortable with one another," he said. "I'm not so sure if it's about roles. It's just about a standard of play for the team – individually, but as a team too. You have to raise the standard if you want to compete in this league. We've had a pretty good start here, but that means nothing. We have to be better, because other teams are going to get better as we go through here.

"A young group has to understand that. A group that has simply gone along and played and said, 'This is okay' – that's how you end up in 27th. So we're always trying to test each other mentally."

Things have fallen nicely into place now, but did Davidson ever see any risk in the hire, which was controversial at the time?

"There's always risk in everything you do," he replied. "When we were in St. Louis, Doug Armstrong really pushed for Ken Hitchcock. He's done a nice job there, but there was risk. I give Doug credit for that.

"With us, as an organization – and through no fault of Todd Richards – we needed to change the culture. It's happened quickly here." 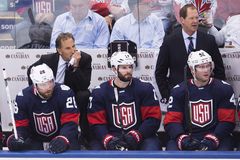