Nazem Kadri and James Reimer kept Toronto in the game on Monday before the rest of the Maple Leafs came alive in the third period.

Kadri scored and added an assist while Reimer made 28 saves as Toronto earned a 4-2 come-from-behind victory over the struggling New Jersey Devils.

The 22-year-old Kadri stretched his point streak to five games when he gave the Leafs a 1-0 lead after the first. But Toronto trailed 2-1 after 40 minutes of play, despite Reimer making eight saves in the second.

"We talked amongst ourselves and pointed out that those first two periods really weren't acceptable and indicated on some of the things we needed to improve on," said Kadri. "That's really what it's about coming in through the intermissions: it's about resetting and analyzing your 20 minutes of play.

"We understood that we had to beat up on their defencemen a little bit and get pucks in behind them and go to work that way."

Clarke MacArthur, Jay McClement and Phil Kessel — with his first goal on home ice this season — all scored in the third for Toronto (14-9-0), which has won two in a row.

Kadri assisted on MacArthur's game-winning goal and leads the Leafs with 23 points in 23 games.

"We weren't very happy with what we were doing for the first 40 minutes of the hockey game and we were fortunate that we were only down one goal," said Toronto head coach Randy Carlyle. "The tide had really turned and we were paralyzed at some points in the game.

"I think our goaltender gave us a chance and when we got to the room we just made a decision that we had to start to change a few of the things that were going on out there or it was going to get worse.

Carlyle added: "To their credit, they went out and did it."

Reimer got the start in Toronto's net, making his first appearance on home ice since Feb. 11, as he recovered from a mild medial collateral ligament strain.

"I felt like I've had a couple good days of practice, kinda feel like I'm getting better, getting more comfortable with playing every day," said Reimer. "It felt pretty good out there.

"It was good to have that third period that we did and be able to get the win."

Toronto is now in fifth in the East with 28 points, three points ahead of New Jersey.

Carlyle was reluctant to heap praise on Kadri when asked about the play of the young forward.

"Who's that? You guys just want to anoint him, don't you?" said Carlyle. "He's a great young player and he's got a skill set that separates him from people, but in the second period he goes 1 on 4 and he was the start of the onslaught of turning the puck over. Then he had a two-minute shift and he had all those things and he still ends up being the fair-haired boy.

"That's great because he is a special player, he's a young player and those are the learning curves that have to take place."

McClement tied the game 2-2 just 39 seconds into the third. The centre stripped Patrik Elias deep in the Devils' zone and deked out Hedberg, putting the puck on his backhand and past the New Jersey goaltender.

MacArthur gave the Leafs a 3-2 lead with a power-play goal at the 7:25 mark of the third. MacArthur put his own rebound between Hedberg's legs after the Devils' Andrei Loktionov took a tripping penalty.

Kadri opened scoring for the Leafs just over 10 minutes into the game. The goal was a little fluky, as he shot from a wide angle, bouncing the puck off the inside of Hedberg's left pad and across the goal-line.

Toronto's momentum died during the first intermission, however.

Zidlicky tied it 1-1 at the 5:43 mark of the second. His wrist shot from the top of the faceoff circle found its way through traffic and over Reimer's left shoulder.

A costly neutral-zone turnover by Leafs forward Frazer McLaren gave Zidlicky his second of the night nearly six minutes later. Zidlicky worked a 2-on-1 passing play with Ryan Carter, putting it past Reimer for a 2-1 Devils lead.

Notes: Veteran defencemen John-Michael Liles and Mike Komisarek were both healthy scratches for the Leafs. Earlier in the day, Toronto general manager Dave Nonis vehemently denied that Komisarek had requested a trade. ... Forwards Matt Frattin (knee) and Joffrey Lupul (fractured forearm) remain on Toronto's injured reserve. ... New Jersey defencemen Peter Harrold and Anthon Volchenkov were healthy scratches, while star goaltender Martin Brodeur remained on the IR with a sore back. The crowd cheered when it was announced before the game that Brodeur would not be playing. ... Willie O'Ree, the first black player in the history of the NHL was in attendance. 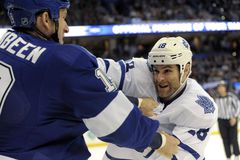 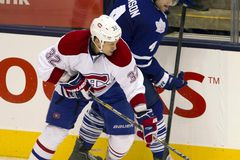 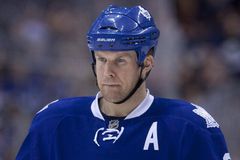 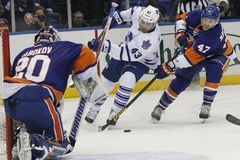