On the surface, it's a hockey decision. Leveraging their nearly limitless resources, the Toronto Maple Leafs have hired Mike Babcock in a preposterous eight-year deal worth roughly $50-million (U.S.).

The contract's average annual wage more than doubles the highest salary ever paid to an NHL head coach. If the thing being bought here is tactical nous, there's no way to justify it.

That's what every other basket-case franchise was looking for in their early off-seasons. That's why the Edmonton Oilers tapped Mr. Babcock's more affordable mini-me, Todd McLellan. It's the reason so many shaky clubs humiliated themselves by begging the former Detroit Red Wings coach to pick them.

But Mr. Babcock deciding on the Leafs – and the Leafs agreeing to wildly overpay him – has very little to do with coaching hockey. This isn't a sports play. It's a holy mission. Mike Babcock returned to Canada to save a blighted cultural institution. If it turns out right, the Hall of Fame is the least of it. He'll be on the $5 bill.

In return for a few coins shaken out of its war chest, Toronto has purchased time and credibility. As the Leafs get set to bottom out for several years to come, nothing is more precious.

In exchange for money, Mr. Babcock has risked everything – his reputation, his professional legitimacy and his legacy. He's also taken the only option that might conceivably push him up to the top of the pantheon.

For the NHL, it's something so valuable it could only be gotten for free – an unassailable figurehead choosing its most important franchise just as things are about to go wrong.

A year in the making and hours in the deciding, it couldn't have ended more perfectly. Maybe that was why it was such a goon show in the lead-up.

It started with Mr. Babcock's decision at the end of the 2013-14 season to turn down a contract extension in Detroit. While Mr. Babcock dithered, Detroit general manager Ken Holland outflanked him.

Mr. Holland did amicable interviews alongside Mr. Babcock, urging him to take his time and make the best choice. He'd always have a home to come back to.

Mr. Babcock apparently did not see how he was being undermined by the boss's agreeableness. Mr. Holland's unspoken implication – "They say he's the best coach in hockey. No one knows him better than I do. And I'm encouraging him to hit the bricks. What does that tell you?" This is the difference between good and bad clubs. Good ones (Detroit, for example) have backup plans. Bad ones (Toronto) have a slot machine in the boardroom.

Hiring anyone is a flirtation and, occasionally, desperation can be a powerful aphrodisiac.

The Leafs' pitch to Mr. Babcock can be reduced to one idea, which was floated last year by a club executive: "If he won here? He'd be on the opening montage of Hockey Night in Canada 20 years after he retired."

It may be the most effective pickup line in hockey history.

A lot will be said in the coming days about challenges and goals and historic opportunities, but this is about money. Not the number so much as the amount relative to anything ever seen before. It's the closest thing the Leafs can do to buying love – both fans' and Mr. Babcock's.

There were other teams in the mix. Montreal – a lesser risk, and just as great a reward – was a possibility until the Canadiens reaffirmed their faith in coach Michel Therrien. Determined to maintain the martyr's pose, Detroit pretended to care until the end. Mr. Babcock was apparently deep in negotiations with the Buffalo Sabres as recently as Wednesday morning.

That made no sense. There are a lot of NHL teams that make being bad seem like a mission statement. Buffalo's one of them. It's the hockey equivalent of Springtime for Hitler. In fairness, so are the Leafs, but at least they play on Broadway.

That was the moment of greatest risk, when you began to suspect Mr. Babcock was about to sell his hard-won reputation for nothing more than cash. Instead, the Sabres were dangled as a stalking horse. We've learned a lot about the new Leafs coach over the past 24 hours – he's both braver and more pragmatic than we'd thought. That may be the best news of all.

Amid the high-fiving, Leaf fans ought to be reminding themselves of the only known known here – Toronto will be a gruesome hockey team for the next three or four years. Before they can start rebuilding anything, they still need to burn the existing structure to the ground.

Some teams are barren. This one is about to become post-apocalyptic.

Over a decade of regular success, Mr. Babcock easily deflected his affable doubters in Detroit. Toronto's has only one critical gambit – "Go for the eyes." The ruthlessness with which he managed the late stages of the signing process suggests he's ready for that.

Mr. Babcock has not been hired to manage players. He's here to manage a decline, then spur a resurgence. His only short-term job is using his best-in-the-game aura to assure people there's a plan. "If not …" Maple Leaf Sports & Entertainment will hope and pray the fan base reasons, "… why else would he come?"

That's what MLSE paid for.

Mr. Babcock made a different sort of calculation. He wants to be seen as the very best – which is a way of saying he already thinks of himself in those terms.

The surest way to prove it is by turning around a hopeless cause. That's what he's got in Toronto, which was why he couldn't say no. 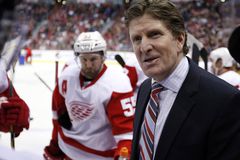 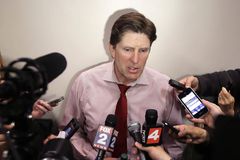 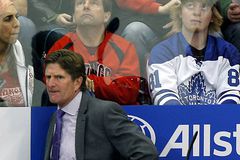 How Bowman’s career path might have affected Babcock’s decision
May 20, 2015 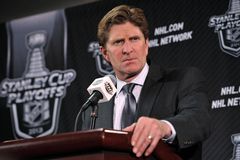