Kelly switched from Detroit to Toronto in 1960, at a time when such moves didn't happen. The deal was done in secret. It wasn't a trade so much as a caper – Kelly was smuggled into town.

He didn't tell any of his Red Wings teammates about the move. There were no phone calls of congratulation. The first time the two teams met, no one said anything to Kelly. Not in the hallway. Not during the warm-up.

Early in the game, a puck was dumped into the Leafs end. Kelly took off after it. As he neared the corner, he felt someone closing in on him fast. He slowed. It was Howe.

"He slipped an arm around my waist, like a lover," Kelly recalled, beautifully.

Howe leaned in – and here Kelly leaned in as well, to demonstrate the intimacy of the gesture – and whispered, "Hey, Red. How's the wife?"

"And that's when Gordie knocked me out."

Kelly told this story in the living room of his Forest Hill home 40 years after the fact. It was his favourite Maple Leaf Gardens tale, and one of his favourites about the man who'd introduced him to his wife.

Kelly shone throughout the telling of it. He was trying to convey something elemental about Howe – his duality, and a great part of what made him special.

Off the ice, he was a gentle soul. On it, he was on a seek-and-destroy mission. His targeting apparatus did not recognize faces, only enemy colours.

Howe typified a brand of hockey that's long since disappeared – brutal, but not vicious; vengeful, and never contrived.

He was the last great link with what most of us still romanticize as the authentic game. A game played by farmers, factory workers and car salesmen, back when hockey was a job, and not yet a vocation.

It was a game in which civic borders were more than a liminal space. They were absolute, uncrossable boundaries. You did not just play against men from Chicago, Montreal and New York. You hated and suspected them.

Back in the 1950s and 1960s, clubs travelled together via train between a home-and-home. One team would have to walk through the other to get to the dining car. Those were genuinely fraught moments. A cross word here could ignite a years-long vendetta.

They were hard men, and none harder than Howe. He wasn't especially big – six-feet tall, a little over 200 pounds. But his hands hung at the end of his arms like wrecking balls. His torso was cantilevered forward like some sort of industrial machine. He was built to ruin.

Despite his reputation as one of the top pugilists in the history of the game, he averaged less than a fight a year during his career.

The legend was based largely on one bloodbath in 1959 with Rangers enforcer Lou Fontinato. The Rangers goaded Howe into high dudgeon. He needed to be shown the cape before the red mist would descend. Sometimes Howe's personal Iago, Ted Lindsay, supplied it on the bench; sometimes an opponent was foolish enough to bait him on the ice.

Fontinato landed the first few blows. Howe shrugged them off. Then he took hold of Fontinato and collapsed his face, breaking his cheekbone, his nose, splitting both lips. The day-after pictures remain some of the most gruesome in sport.

Howe fought even more rarely after that. Everyone had seen the photos. He didn't need to fight any more. And since Howe took no particular pleasure in beating people up, he stopped.

He continued abusing people with the rest of his body, and at speed. Which was probably worse. He continued to pile up points with such marvelous dependability, it tended to obscure his excellence.

If Howe hadn't been quite so metronomic over so many years, we'd probably talk more about his skill. Quiet efficiency doesn't rate on the heat scale.

Fifty years on, what we remember about Howe is his soft sense of menace. He was a ruthless player. Dirty, even. But never thought of with malice.

That would be impossible now. We're too binary – people are good or bad, never nuanced. We have slo-mo replays. We'd be going over the Fontinato fight trying to pick out the moment when Howe should have stopped swinging.

Imagine all the shots Howe delivered with those swinging elbows. He would occasionally pin a man against the boards with his hip and ride him the length of the ice, knocking his head back and forth like a flesh piñata. He was a terror.

But thankfully, there is no video. So instead, we get to remember Howe gauzily. Like the time in which he played.

Maybe he didn't always do what we'd consider the right thing, but he damn well did it for the right reasons. He stuck up for himself and his teammates. He gave no quarter. He waited until you asked for it, and then he gave you a lot more than you'd anticipated.

He's gone now, but he'd long ago become a feature of our imaginations. Howe's name summons up a game we'd no longer recognize and an idyllic, illusory vision of the sea-to-sea-to-sea.

What he represents now is Canada's frontier spirit. We don't have movie stars or galloping politicians to anchor our national mythology. We have hockey players, and none greater than Howe. He's our John Wayne, our Theodore Roosevelt.

He is an idealized vision of ourselves – tough, decent and uncompromising.

On some very basic level, that's how we'd all like to define ourselves. 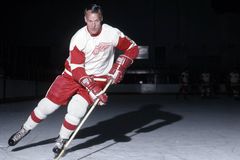 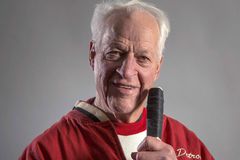 A look back at Gordie Howe's hockey career
June 10, 2016
Follow us on Twitter @globe_sports Opens in a new window
Report an error Editorial code of conduct
Due to technical reasons, we have temporarily removed commenting from our articles. We hope to have this fixed soon. Thank you for your patience. If you are looking to give feedback on our new site, please send it along to feedback@globeandmail.com. If you want to write a letter to the editor, please forward to letters@globeandmail.com.
Comments