Having set the symbolic and emotional bar so high in recent days, the only unclaimed territory left for the Canadiens is pagan idolatry.

Pregame, the little kid comes wobbling out with the torch. He turns to each section of the crowd in turn. They're playing the sound of a hard, whistling wind over the PA. The kid raises the torch. The crowd bows or waves or does something just short of speaking in tongues.

Being in the Bell Centre right about now doesn't feel like going to a hockey game. It feels like joining a cult.

Which is the level of belief that will be required going forward after Game 1 of this series.

It's early days, but the problem is now that the city is way ahead of their team, on a bunch of different levels. Maybe it's time to start rotating in a random fan at the start of each period. They couldn't have looked any worse than the guys in red and blue.

In the aftermath of a 7-2 shellacking, Montreal was also left perilously at odds with itself.

Coach Michel Therrien, hands shoved in his pockets like he was afraid of punching someone: "We weren't ready physically or mentally."

Was the psychological spillover of the Boston series a problem?

Brian Gionta, tightly: "That had nothing to do with it."

Rene Bourque, loosely: "We got a little emotional letdown after the Boston series."

Having looked so much lighter than the wide-hipped Bruins, the Canadiens are now matched against a New York Rangers team that wins the way they do – with nimbleness and speed. In order to work, those two qualities can't be applied intermittently. They must be a 60-minute concern.

But on Saturday, Montreal who came out looking listless and more-than-a-little worse for wear.

Over the years, the late-night attractions of this city have worked in the Canadiens favour. Right now, some civic-minded club owner should be dropping off a phone-book-sized stack of free drink tickets at the Rangers team hotel.

The Canadiens were down 2-0 after six minutes. They had no answer for New York's jump or spirit, at either end. It got much, much worse from there.

In the second period, 230 lb. New York forward Chris Kreider steamrolled into goalie Carey Price on a choppy breakaway. Price's right leg folded in under him. He was down for several long minutes. The crowd had begun drifting out of the game, but now you could see the panic rising off them like steam.

He stayed in for the remainder of the period, untested for the most part. In his parting move, he punched an odd-angled shot into his own net.

Peter Budaj started the third in net for Montreal, and that sense of unease spread. That the Slovak let in three quick goals of steadily reducing quality didn't settle any fears.

Therrien, working very hard to seem unconcerned: "That was more to protect him than anything."

Which is nowhere close to saying he isn't hurt.

Let's put this out there right now – if Price is seriously banged up, this thing is already over. And if he's okay, it might be over as well.

"We've already put this one behind us," P.K. Subban said, fifteen minutes after the game was over. Well, that doesn't sound true.

"It wasn't what they were doing. It was what we weren't doing," said Gionta, which is also a bit delusional.

Montrealers with short memories will now spend the next two days staring into the middle distance and thinking dark thoughts about 2010.

That Canadiens team also won two series in impressive fashion to begin the post-season. In the second, they took out the defending Stanley Cup champions (Pittsburgh) in seven games.

Then they strutted into the Conference Finals and had their heads gently popped off. That first game – a 6-0 shellacking by the Philadelphia Flyers – was queasily reminiscent of this game.

"In Canada, hockey is Saturday night, not Saturday afternoon," New York coach Alain Vigneault said slyly. "Maybe we got lucky with that."

From this vantage, you can point to a host of different and completely reasonable causes. The concern is their cumulative effect.

This was a failure of mentality. It showed a lack of strength. It must be immediately corrected in Monday night's Game 2 or this thing is already over the side of the cliff.

The Montreal Canadiens have to prove they have the brass to pick their game up to the level of the people paying to watch them. 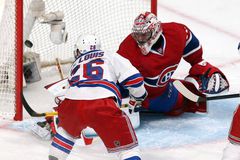 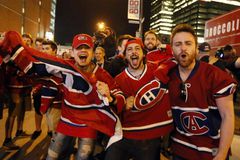 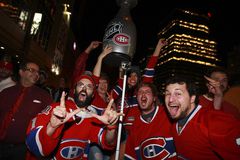 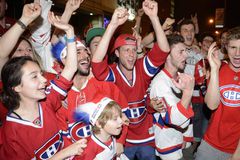 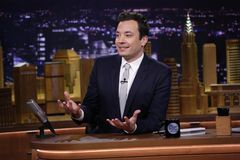 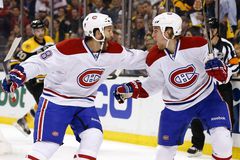