After the unsealing of frank and provocative e-mails between top National Hockey League officials on Monday, the league has two problems. Or, fairer to say, two more problems.

The 2011 e-mail chains, first revealed by TSN's Rick Westhead, show the NHL in the midst of a slow-rolling existential crisis. At this point, a class-action lawsuit by former players is still months in the distance. There isn't any panic in the tone. Rather, it's one of unguarded curiosity.

The "smoking gun" conversation is started by then-vice-president of player safety Brendan Shanahan. He sends league commissioner Gary Bettman a link to a story by The Globe and Mail's Eric Duhatschek, headlined Getting rid of hockey's goons. The piece wonders whether a more concerted effort by the league to eliminate the role of enforcer might have saved the lives of former players Rick Rypien, Derek Boogaard and Wade Belak. All three deaths have been tied to the effects – both emotional and physical – of their brutal work.

"An interesting question is whether being an NHL fighter does this to you (I don't believe so) or whether a certain type of person (who wouldn't otherwise be skilled enough to be an NHL player) gravitates to this job (I believe more likely)," Mr. Bettman responds, in part.

This is the quintessential Bettman. He is a lawyer, thinking and operating like a lawyer – "What can be proved?" "Who can be blamed?" And not necessarily in that order.

Later in the discussion, Mr. Shanahan, speaking like a former player, is less equivocal.

"Fighters used to aspire to become regular players," he wrote. "Train and practice to move from 4th line to 3rd. Now they train and practice becoming more fearsome fighters. They used to take alcohol or cocaine to cope. (Kordic) Now they take pills. Pills to sleep. Pills to wake up. Pills to ease the pain. Pills to amp up. Getting them online." (John Kordic refers to the deceased former Toronto Maple Leaf.)

That is the image the league desperately does not want to portray – of a conglomerate pushing a group of half-shattered employees out onto the ice night after night to kill themselves by inches for the sake of entertainment. Mr. Shanahan seems to confirm that the worst rumours about hockey's combat culture are a reality.

In other missives, the current Toronto Maple Leafs president comes off as the man pushing hardest for change from within. Here he is in 2012: "I believe that fighting as a tool or strategy is leaving the game of hockey and that we can either lead or follow."

His philosophic opposite is Colin Campbell, his predecessor in the league's executive. In response to the comment above, Mr. Campbell replies, "Not so sure how drastic we take that lead if that is what your [sic] suggesting."

Mr. Bettman remains above the fray. In a 2011 note, he cuts off a group conversation about Mr. Shanahan's public comments on curbing fighting with, "I think we went too far. This is sensitive territory and we need to be very careful."

The e-mails are a problem in two senses. First, legalistic. Do they prove the league acknowledged a problem and did nothing about it? That question will be decided in a Minnesota courtroom, where the class-action suit has been filed. That's a simple money play. And the league has plenty of money.

The more pernicious issue is one of perception. That's an ongoing existential threat.

From the outset of this crisis, Mr. Bettman has been exceedingly careful in his public pronouncements.

"From a medical science standpoint, there is no evidence yet that one necessarily leads to the other," Mr. Bettman said during last year's playoffs, speaking specifically about CTE (chronic traumatic encephalopathy). "I know there are a lot of theories, but if you ask people who study it, they tell you there is no statistical correlation that can definitively make that conclusion."

If that's the case, you wouldn't know it from the NHL's cultural drift. Five years ago, fighting was a main feature. Though it still exists today, it's been relegated to the fringes. The Age of the Enforcer wasn't ended by a fiat from head office (as Mr. Bettman correctly guessed). Rather, a few simple rule tweaks and a large measure of public disgust simply made it untenable.

In the end, hockey's own gladiator class – Mr. Boogaard, Mr. Rypien et al – did more to end fighting than Mr. Bettman ever could have.

That's a good thing resulting from a very bad outcome. This latest public stumble can be another.

There is no longer any point in maintaining Mr. Bettman's public line – that we don't know what we don't know, no matter how many broken men come forward to tell the stories of their precipitous late-in-life decline. While there remains some doubt in parts of the research community (because very little can be "definitively" proved when it comes to the vagaries of the human mind), there isn't any left in the real world.

Getting hit in the head over and over again can eventually kill you, or cause you to kill yourself through a variety of destructive behaviours. In the e-mails, we see that even Mr. Bettman is willing to be convinced on that score. Mr. Shanahan and Mr. Campbell sit on either shoulder, gently pushing and pulling. It's a simmering battle between the past and the future.

But if Mr. Bettman still requires convincing, the majority of hockey's customers do not. The next step is acknowledging the truth they've already been convinced of, and taking the moral leap that logically follows.

Unlike the National Football League, the NHL is well down the road to solving the parts of the problem that can be solved. Fighting is fading away. Head shots are being steadily and more harshly punished. Players are being pushed – often unwillingly – to accept that hiding a head injury is no longer a sensible part of the tough-guy code. In relative terms, the culture of the game is changing remarkably quickly.

Where hockey lags behind professional football is in acknowledging a debt of responsibility to players who didn't have the benefit of better information and/or a public crusade.

The e-mails reveal no obvious bad acts or bad actors. Taken in sum, they show the game's caretakers doing in private what everyone else has been doing publicly – looking for answers.

They should be obvious to the NHL by now: Embrace the majority opinion of medical science. Become the first professional league to acknowledge without caveats that head injuries can kill and that real harm was done. Settle the suit. And apologize to the people who were hurt while building the league into a multibillion-dollar giant.

To do otherwise would be to try to separate a game that thrives on its history from its own past.

Hockey has plenty of issues. This should be an elementary one to solve. All it requires is that Mr. Bettman and his colleagues put aside their lawyerly concerns, and begin to think about this like people.

Leafs’ Tyler Bozak ready to return after missing 21 games with concussion
May 16, 2018 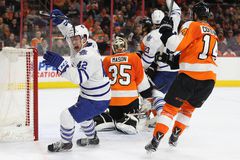