When the Vancouver Canucks and Los Angeles Kings showed up at the Mercedes-Benz Arena in Shanghai for a practice earlier this week, they found an ice sheet shrouded in fog, as cold air inside the arena mixed with the city's humid air to create a scene a few wry fans likened to a horror movie.

By Thursday night, the mist had been vanquished by 25 specially installed dehumidifiers. But as players lined up for the Chinese national anthem, the NHL's Shanghai problems weren't quite over. This time, they came from the stands, where several yawning sections of empty seats looked down on a 5-2 Kings win.

"Personally, I think the NHL blew it," said Phil Esposito, the hockey legend who has become a kind of unofficial ambassador for the game in China.

"You have got to promote. This game tonight – I looked in the papers," he said in an interview before play began. "There wasn't a goddamn word about it. Not one word."

The official attendance counted 10,088 people in a venue that can hold 18,000. But more than a few seats were given away, including large numbers for students. Outside, scalpers offered $240 tickets for $37.

"It's not ideal," Canucks president Trevor Linden said. League deputy commission Bill Daly even mused about defining hockey more broadly in China. "The game can also be played in streets and on other platforms. It's about sticks and balls and getting people interested," he said.

"We're looking forward to being helpful in building an interest in hockey that really transcends the ice game."

Still, the inaugural edition of Hockey Night in China – the league has agreed to a total of six preseason games over eight years – wildly exceeded the draw of the Kontinental Hockey League, whose Chinese Kunlun Red Star men's team has regularly played in Shanghai to audiences numbering in the hundreds. (Esposito has advised Kunlun.)

And the Thursday night matchup in one of Shanghai's premier locations showcased the NHL to a crowd who hooted at big checks, roared at goals and even managed a passable audience wave.

"It was great, exciting," said a 27-year-old Shanghai legal adviser and hockey fan named Wei, who declined to give her first name. "Even if it involves some attacking and bodily harm, the experience of that excitement and the vibe of the live game is just so unique," she said.

"I thought maybe they wouldn't have pulled it off – but it turned out to be actually a really good time," said Dan Scarrow, a Vancouver real estate agent who works with Chinese buyers, and watched with a group of Canadian and Australian business people.

People came to watch from far and wide – North American teachers from neighbouring cities, Chinese fans from other provinces, students at a local sports university and a group of four women in Kings jerseys who flew across the Pacific to watch their team.

"Seriously, they're like playing hockey here in China. It's mind-blowing. So we decided to come from L.A.," said Jolyn Tardio, a Kings season-ticket holder determined to take in the entire experience.

"I came to China to see the Great Wall, to see hockey and to eat insects," she said, laughing. Also, "we're going to see cricket fighting in Beijing," where the two teams will play a second game Saturday afternoon.

Although the two games are a blip on the hockey calendar, they carry some weight as the league decides how much to spend on fostering a new market in the world's second-largest economy, and for how long to commit.

"This is the test of whether they move forward and continue to play," Linden said as he looked out on the ice Thursday night. "I think it's gone well from a logistics standpoint."

"Hopefully, there's some opportunity here," he said, in "building a bit of a hockey culture in China, winter-sports culture. It's going to take some time. It doesn't happen with two preseason games."

Indeed, a 30-year-old finance worker named Sun (she also declined to give her first name), came away from the Shanghai game confused. "I've watched on TV, but don't know anything. I still don't understand the rules," she said.

Nevertheless, she got what she was looking for: a chance to have her six-year-old son "experience the atmosphere. I want him to learn hockey. I want to train him up with a bit of manhood."

The league, meanwhile, shook off a suggestion that China – and particularly a more southerly part of the country such as Shanghai – is not likely to be fertile ground for a sport played in cold conditions that many here have never experienced.

"Our experience in the United States and Canada has been that hockey can work anywhere," Daly said.

The lure of the China market might even be enough to bring NHL players back to the Olympics when the Winter Games come to China in 2022, he said.

But, "the opportunities that might be available for hockey and for us [in China] – it may result in a different equation."

With reporting by Paula Jin

In photos: The Kings of Hockey Night in China Gallery 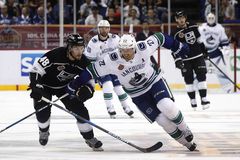 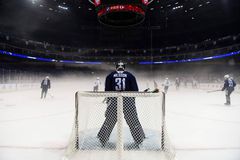 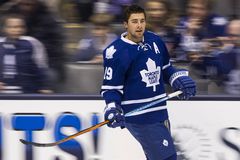