The London Knights and the Shawinigan Cataractes will be coming from opposite directions when they collide in the final of the Mastercard Memorial Cup.

The Ontario Hockey League champion Knights have been off since Tuesday, as they clinched a bye to the final by finishing first in the round robin portion of the four-team tournament.

The host Cataractes took the long route, finishing last in the round robin but then winning the tiebreaker game against the Western Hockey League-winning Edmonton Oil Kings and dethroning the defending champion Saint John Sea Dogs in the semifinal.

The Knights (2-1) and Cataractes (3-2) will clash Sunday night in the final amid the clamour of the raucous Shawinigan fans at the Bionest Centre.

The question to be answered is whether the Knights have the advantage of being rested or the Cataractes are favoured for taking momentum into the decisive game.

"I guess we'll have to wait and see," was all Cataractes defenceman Morgan Ellis would say.

The main advantage could be home ice, where a veteran Shawinigan side seems to feed off the deafening noise, which may be intimidating for a mostly younger London team.

"The buildings' always really loud and it definitely helps," said Shawinigan rearguard Brandon Gormley, the Phoenix Coyotes' prospect who has been one of the stars of the tournament with nine points in five games.

The Cataractes also have confidence from having handed London its only loss of the tournament, a 6-2 thrashing on May 20 in which Gormley had two goals and an assist.

The Knights have succeeded with a defence-first game and strong counterattacking from top forwards like Seth Griffith and Vladislav Namestnikov.

Their specialty is shot blocking, particularly from veteran centre Austin Watson — who is also their scoring leader thus far with four points in three games — and the top defence duo of Jarred Tinordi and Scott Harrington. Watson's linemates, the pesky twins Matt and Ryan Rupert, should also be a factor.

A problem is that Shawinigan's defence aces, Ellis and Gormley, have been particularly effective at getting shots through to the net for forwards to tip in or score on rebounds. Both prefer the well-placed wrist shot to the big slapper from the point.

"It's so hard to score in today's game," Gormley said. "Guys are blocking shots and collapsing down low.

"Any way we can get pucks to the net and keep them in at the blue-line, it benefits our forwards."

The game-winner that sank the Sea Dogs on Friday night was a case in point, as Ellis slipped a shot through that Yannick Veilleux tipped past goalie Mathieu Corbeil to break a 4-4 tie.

It was the Cataractes third game in as many nights and dispelled any notion that fatigue would be a factor.

Hunter welcomed the break because his team had been through a long season and playoff drive that culminated with their victory in five games over Niagara in the OHL final.

Shawinigan finished second to Saint John in the Quebec Major Junior Hockey League regular season, but then were upset in seven games in the second round by Chicoutimi. That left them a 31-day break before the Memorial Cup, although they didn't sit idle.

Coach Eric Veilleux put his team through a punishing schedule of practices and off-ice workouts to get them into top shape in body and mind.

"We had a chance to talk during that month," said Veilleux. "Many things were addressed.

"When you go through adversity, you pretty much know the reasons why. I don't want to call it an accident, but we lost Game 7, which we weren't really planning on. The right things were said. You find solutions. They were clearly understood before this tournament and that's what we're seeing right now."

Now Shawinigan has a chance to be only the second team to win the Memorial Cup after having to play in a tiebreaker game. The first was also in Quebec in 2009 in Rimouski, where the Windsor Spitfires lost their first two games and then ran the table.

The final will be Shawinigan's fourth game in five nights and their sixth in 10. It will be London's fourth in 10 days.

"They look prepared, physically and mentally," said Hunter. "They're an older team, not depending on 17-year-olds. That helps."

Another factor is goaltending, where Shawinigan veteran Gabriel Girard has been solid while London's Michael Houser has been surprisingly off his game. Girard has been the starter since the Cataractes' second game after Alex Dubeau got the loss in the tournament opener against Edmonton.

He has posted a 2.50 goals-against average and .917 save percentage in four starts.

Houser was named the outstanding player of the OHL this season after tying a league record with 46 wins and posting a 2.47 average. But at the Memorial Cup, he has let in some soft ones. His average is 3.03 and his save percentage a weak .885.

The Cataractes are a founding member of the QMJHL but have never won a Memorial Cup. The Knights are seeking their second in seven years, both with brothers Dale and Mark Hunter running the club.

They had a veteran, star-studded team in 2005 that included winger Corey Perry and won the event on home ice.

Dale Hunter was the coach then with Mark as general manager, but the roles are reversed after Dale took time out to coach the Washington Capitals this season.

Mark said the brothers have evolved since their first title.

"We're calmer than we were then," he said. "We know it won't help them if we're too wound up.

"They have to do it on the ice. We're just here to help them along. We don't want them too tight. It's going to be a game with a lot of emotion. And too much emotion is no good either." 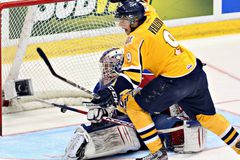 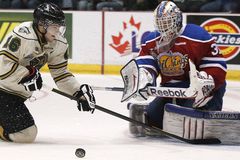