It's probably safe to say no NHL team has had a year quite like it.

The Toronto Maple Leafs 2014 had highs, lows, firings, hirings and the one thing that the fan base had unfortunately had to get used to over the last few seasons.

If you'd like to avoid reliving that nightmare fodder, we'll save rehashing it for the end. But be warned: What follows is a clear-eyed, comprehensive look back at the eventful 365 days that were the past year for the Leafs.

The highlights
AKA "We're going streaking"

The first time they did it, it seemed like it might save not only the Leafs season but potentially a lot of staffers' jobs.

Mired in a funk after winning only five games in regulation or overtime in their last 32, the Leafs were on pace for less than 84 points and a sure playoff miss in mid-January.

Then they rattled off an 11-2-1 streak out of nowhere, beating teams well ahead of them in the standings like Boston, Montreal, Tampa Bay (twice) and Colorado. Phil Kessel was a huge driving force in the run with an incredible 10 goals and 15 assists in the 14 games, forcing his way up into Art Ross Trophy contention.

By the end of it, the Leafs had gone from 12th in the East to one point back of third place in four weeks.

Similarly, after an embarrassing 9-2 loss to Nashville put the Leafs on the outside of the playoff picture after 19 games early on this season, the Leafs sticks got hot and they went on an unexpected 10-1-1 to quiet the critics.

Through everything, the one constant in the Leafs highs has been its goaltending. When they've won, it's often been because of the man in net, and that's often been Jonathan Bernier.

Playing on one of the most defensively porous teams in the NHL, Bernier posted a .918 save percentage in 2014 despite facing 35 shots for every 60 minutes he played.

The Leafs record – 38 wins in 78 games in this span – wouldn't be nearly as nice without him.

The big game at The Big House ultimately ended up being some of the most memorable periods played in the NHL last season. The setting – with more than 100,000 screaming fans and a heavy snowfall – made for great television and an unforgettable experience for anyone lucky enough to attend.

That the Leafs snuck out a 3-2 victory in a shootout, despite being outplayed by the Red Wings, helped make it a happy memory for Toronto fans, too.

He remains a controversial figure given, well, his figure, but the fact is Kessel knows how to score goals better than almost anyone in the sport.

His 34 goals in 78 games in 2014 put him in the top 10 in the category, and as of early this week, he trailed only Claude Giroux, Tyler Seguin and Sidney Crosby in points with 82.

Without his contributions, Tyler Bozak and James van Riemsdyk wouldn't have the production they do, the power play wouldn't be nearly as potent and the Leafs wouldn't have a hope.

After years of dismissing the value of the analytics that were so roundly criticized their play, the Leafs pulled an abrupt about-face in late July.

New president Brendan Shanahan, an admitted neophyte in the area when he was hired in April, canned two high level, old-school executives and hired 28-year-old Kyle Dubas – an analytics acolyte from the OHL – as their replacement.

Dubas then quickly formed a partnership with global analytics giant SAS and built an in-house team of number crunchers, whose work should eventually help the franchise catch up to what some of the NHL's better teams have been doing with data the last few years.

The lowlights
AKA "Possession, regression, depression"

It's become the dead horse that continues to get beaten by the fan base and media only because it's a problem the Leafs simply can't seem to escape: They get outshot.

Even with a rotating cast of players and new assistant coaches brought in this fall, the problem has persisted this season, to the point that the Leafs are now trending toward the gaudy shots against totals they had last season.

Overall, the Leafs were outshot by nearly 500 shots in 2014, an average of more than six per game. Only Buffalo has been worse.

Clarkson signed his behemoth and buyout-proof seven-year, $36.75-million deal in 2013, but it was the gift that kept on giving into the following year.

With salary cap space at a premium – the Leafs actually exceeded the cap in 2013-14 and are dealing with a small overage charge this season – Clarkson produced all of 11 goals and 16 points in 68 games in 2014, settling into a unremarkable third-line role despite his top six salary.

Far from emerging as the leader or difference-making glue guy that he was made out to be when the deal was signed, Clarkson simply seems to be a guy, one who would be a fine foot soldier at half the price tag but an anchor at this ticket.

3. An off-season of ugly near-misses
(June and July)

The good news when it comes to Toronto's roster and results is it could have been a lot worse.

Ultimately, the damage done in free agency was not nearly as dire as 2013. After whiffing on Bolland and other near-mistakes like defenceman Deryk Engelland, management made mostly low-risk, low-term bets that will give them cap flexibility.

That Shanahan cleaned out multiple executives after free agency, however, speaks volumes as to his opinion of how the summer retooling process went.

In one of the oddest moves made by any team in 2014, the Leafs tossed their three assistant coaches overboard in May and gave a thumbs up to headmaster Randy Carlyle, the architect of all those defensive issues mentioned above.

Predictably, Toronto is now dealing with a lot of the same issues less than halfway into Carlyle's first season under a new Shanahan-approved two-year extension that carries his deal until 2017.

(It's safe to say the Leafs likely won't be exercising the team option that was optimistically attached to the final year.)

A few days after the extension, one of the fired assistant coaches, Scott Gordon, told The Globe and Mail that the Leafs biggest issues was complacency after making the playoffs in the lockout-shortened 2012-13 season.

After the great 18-wheeler incident of 2012 and the Meltdown in Beantown in Game 7 in 2013, this was simply a post-Olympic face plant that was a long time coming.

The Leafs won six of their final 22 games, a span that included eight consecutive losses and a 3-13-0 slide to end the year after Bernier was injured (in part due to his heavy workload).

*- all numbers in this story are from prior to the Leafs Dec. 31 game in Boston

Mirtle: Shanahan has his hands full in trying to fix the Leafs
December 29, 2014 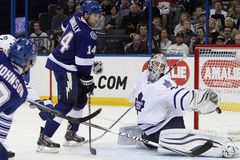 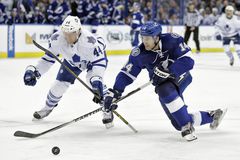 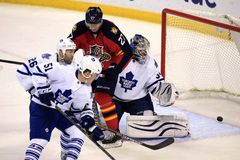