Well, we're well into Day 6 of free agency, and the Toronto Maple Leafs have easily been one of the league's quieter teams.

Especially if you look at all those that finished near the bottom of the standings alongside them.

The Carolina Hurricanes, for example, finished two points ahead of Toronto, dealt for Jordan Staal and are working to add another top six forward.

The Blue Jackets traded for Nick Foligno (and are working on a Rick Nash deal), the Oilers signed Justin Schultz, the Ducks added a pair of defencemen (and are looking for good return on Bobby Ryan) and the Wild may have hit a homerun in adding Zach Parise and Ryan Suter.

There is, of course, still a lot of off-season to go, and Leafs GM Brian Burke insists he isn't close to being finished. He's listed his team's top three priorities as (a) getting bigger (b) adding a veteran goaltender and (c) adding another top two centre.

Those aren't easy holes to fill, even with some $12-million in cap space. In one case, it's probably not even the right one.

Here's the Leafs roster as currently constructed, with James Van Riemsdyk a bit of a wild card given we don't know where he'll slot in (there's talk he'll be tried at centre, but here's betting he'll ultimately end up on the wing):

What this Leafs team needs more than size – where they were actually about league average last year – is more top end talent at all three positions.

That push to get bigger (mainly up front) certainly fits with Burke and coach Randy Carlyle's philosophy, and if there's a way to fulfill it while also making the team better, that's fine.

But the Leafs problem was hardly their forwards' play in the offensive zone last season: They scored more goals than all but nine other teams, and the addition of Van Riemsdyk should help offset whatever drop off players like Joffrey Lupul may have.

Where they really struggled was keeping the puck out of their net, a category they finished second last in and which has been the franchise's weakness essentially since the lockout.

Since the lockout, Toronto has scored more than the league average in five of seven years. Their poor defensive play and goaltending has generally been what has held them back, however.

Carlyle may help there, but this is a group that's well stocked with second and third forwards and depth defencemen but which lacks a lot of two-way skill. Too many forwards are either offence-first or only capable of playing a limited role, and there aren't enough options to take on difficult assignments on the back end beyond Carl Gunnarsson.

In other words, they're asking too many players to play too high in the lineup and that can be a tough thing to fix.

3. A top six forward (preferably a centre) who has the ability to play against other team's top lines.

Consider, too, that there are really only three ways to acquire the kind of top end players Toronto needs.

No. 1 is to draft them, as the Los Angeles Kings did with the likes of Drew Doughty and Jonathan Quick.

Burke has put himself into a difficult position in that options No. 1 and 2 aren't particularly viable at this point. He traded away two of the highest picks he's had in his tenure in Toronto, and the other two years, his team hadn't quite bottomed out to pick right at the top of the draft and get a player who could make an immediate impact.

(Although we'll have to wait and see how 2012 pick Morgan Rielly turns out before making judgements there.)

Free agency, meanwhile, has become a place where elite talent is scarce and can generally only be acquired with the type of heavily front-loaded deals Burke has refused to give out.

(The fact the Leafs are no longer much of a free agent destination is also a problem.)

That leaves only trades, and to get elite talent there, you generally have to either get really lucky or give up something of considerable value.

And the Leafs can't afford to subtract a lot of talent from their current group.

That said, the Kings team that just won the Stanley Cup had eight regulars who were acquired by trade, including five of their top seven forwards.

With a little bit of prospect depth, there are ways for Toronto to get at least incrementally better at every position over the next few months – especially defensively – and that will go a long way to climbing the standings.

Where there is likely the most change coming in Toronto is up front. Burke said on July 1 that he envisions newcomer Jay McClement as the team's new No. 3 centre and David Steckel playing in the No. 4 spot, which leaves Tyler Bozak and Tim Connolly as tradable players.

Especially if they intend to play Van Riemsdyk in the middle or add another centre in a deal.

So there's one option in terms of what the Leafs have to move out: A young, cheap centre in Bozak who can play on the third line and several forwards like Nikolai Kulemin, Connolly (whose value is obviously low given his contract), Nazem Kadri and others who can't all get ice time in Toronto.

It's not a lot, but it's something.

On the blueline, the Leafs remain thin on the right side after trading away Luke Schenn, which opens the door for Korbinian Holzer and Mike Kostka to get whatever minutes Mike Komisarek isn't capable of playing.

Then there's Cody Franson. A restricted free agent, he wants more of a role than he had a year ago and will have to either get assurances he'll be a regular in the top six or a new home.

Here's where they could turn to one of the handful of options in free agency, something that wouldn't be a bad idea given this group of defencemen seemed to struggle whenever the first pair wasn't on the ice. There aren't many right handed blueliners available, but there are a few capable veterans who would log minutes in defensive situations and on the penalty kill and ease some of the load on Phaneuf and Gunnarsson.

Ideally, they'd land a Suter-type to be their No. 1 defenceman, but as that doesn't appear to be an option, any improvement here is important.

Where the Leafs struggled last season

Toronto scored enough in 2011-12 to be a playoff team but was in the league basement in goals against, save percentage and penalty killing

That brings us to the most difficult part of this offseason for Burke.

With starter James Reimer battling a head injury for a big chunk of last year, the Leafs netminders posted the second worst team save percentage (.8974) in the league last season, better than only the Tampa Bay Lightning.

Had they managed to stop the puck at even a league average rate (.9106), they would have allowed 0.41 fewer goals against per game and actually scored more than they allowed.

The debate in Toronto the past few years has always been who's to blame for that save percentage number – shoddy team defence or shoddy goaltending – and it's not a dispute anyone ever seems to win.

Even if we split the blame for a poor goals-against average down the middle, that still leaves half of the team's most pressing issue in the hands of two young netminders in Reimer and Ben Scrivens.

Both have excellent track records in the minors and limited NHL experience. In a combined 83 NHL games played, however, they have a .910 save percentage, which would be a dramatic improvement if they can manage that over a full season.

Acquiring Roberto Luongo, meanwhile, would be one solution, and it appears there's a fit there given Toronto's abundance of third-line forwards and the Vancouver Canucks need for depth up front. (Luongo, however, appears to have his heart set on a return to Florida.)

Failing that, any veteran goaltender with a track record of success who becomes available should be pursued simply to give Reimer a safety net if he struggles.

As currently constructed, with no additions made, this Leafs team is likely headed close to where it finished last season barring a breakthrough season from its young netminders.

But if Burke can add another two-way forward, address a hole on the blueline and get competent goaltending, they should improve by 10 to 15 points and contend for a low playoff seed. 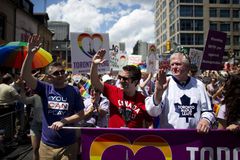