As he sat comfortably in his dressing-room stall, leaning back and waxing poetic for the benefit of a few reporters, the Toronto Maple Leafs' winger chuckled and smiled whenever teammate Nazem Kadri become the topic of conversation.

There's a budding chemistry there already, and a friendship, too.

But there's something more.

"Sometimes when I look at Naz, I see a lot of characteristics that I used to have when I was younger," Lupul said. "Everyone develops on their own time and sometimes you have to make mistakes and do some things wrong and get criticized to make you the player and the person you become later.

"He's a fun guy to be around. And I enjoy talking to him because I do see a lot of myself there as well."

No. 1 among what Lupul sees is a player with a carefree attitude off the ice, the kind of easygoing style that can – and often does – rankle old-school coaches, and that got Lupul and Kadri in hot water early in their careers.

But while there are many similarities between two – including the fact both were picked seventh overall, seven years apart – the biggest key difference is just how quickly Kadri has put everything together.

While it really took Lupul until he was 28, in his first full season in Toronto, to emerge as an NHL star, Kadri appears to be there at just 22 and well before everyone expected it.

"Nobody outside thought he was going to do it," said netminder Ben Scrivens, who has spent much of the past three seasons with Kadri with the Toronto Marlies. "He's surprised people outside. To people who know him and work with him every day, this isn't surprising. No one here goes, 'Oh wow, where is this coming from?' It's just, 'That's what Naz can do.' He can make things happen out of nowhere."

"Things" in this case mainly being terrific offensive chances, many of which have been ending up in the opposition net of late.

With two pivotal games against the Boston Bruins looming on Saturday and Monday, Kadri will be a focal point, as he sat eighth in NHL scoring prior to Friday's games with 13 goals and 20 assists coming in large part while playing on the third line.

That limited role, however, has changed in a hurry, as in his last 10 games, Kadri has averaged more than 17 minutes and has eight goals and seven assists.

Even more impressively, coach Randy Carlyle has begun using him against other team's offensive stars and received positive results, with Kadri posting a plus-3 rating in two outings this week.

Despite the relatively small sample size of less than half of a full 82-game season, this team MVP-like start raises the possibility that the Leafs' long-awaited need for a top centre could finally be filled.

Even with Tyler Bozak set to become an unrestricted free agent this summer, the Leafs suddenly appear to be far better positioned down the middle than at any time since Mats Sundin left in 2008.

Not that management is rushing to any conclusions.

"He's done a good job and we're very happy with him," general manager Dave Nonis said on Friday. "But it's a little premature to say we're all set there [at centre]."

Kadri isn't taking his spot among the NHL scoring leaders for granted, even if he admits it's nice to see his name up there after two years bouncing between the Toronto Marlies and Leafs.

"That's pretty cool, especially with how my last couple of years have gone," Kadri said. "It's nice to finally get a little bit of recognition and a bit of respect not only from my teammates but guys around the whole league. But it's just half the season so I've got lots more work to do."

While Kadri's production may slow down over the final 17 games as he sees more checking lines and responsibilities, it's also safe to assume that with additional ice time and better linemates, he can generate even more opportunities.

In terms of points generated per minute at even strength, for example, he's trailing only two other centres: Eric Staal and Sidney Crosby. And in recent years anyway, that's just the type of statistic that No. 1 centres are made of.

"If he keeps playing the way he can, wanting the puck and wanting to make the big plays, I can see him doing even more," Lupul said.

"He comes to the rink and he's always smiling and really relaxed," Lupul said. "That was what people thought of me when I was younger. Sometimes the coach will mistake that for kind of a lazy attitude once in a while, but he's great once the game starts. He flips a switch and is really intense. It's kind of cool to see." 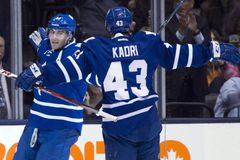 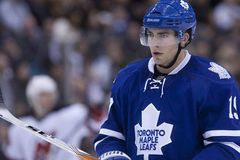 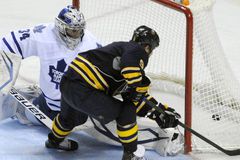