As the final horn sounded at Scotiabank Place in Ottawa on Saturday, Toronto Maple Leafs netminder James Reimer raised his arms and directed a few words of thanks toward the rafters after picking up his 20th NHL victory in a 4-2 win.

It's a celebration that has become a regular ritual for the 23-year-old rookie, one he performs after every win in what is a testament to his roots in the tiny Mennonite community of Morweena, Man.

His teammates and coaches, meanwhile, raved about his composure under pressure. Despite his team playing nothing but must-win games for months, Reimer rarely appears nervous, agitated or frustrated in goal.

In a position where the mental side of the game is more important than anything, Reimer said he feels his religious background is a big reason why he has been able to cope with the day-to-day stress of playing goal in the NHL.

"It's a big reason why I'm calm out there," he said. "I mean, I don't have any fear of what's going to happen. The way I see it, or tell myself, if I let in zero or six, it's His call up there. It's whatever He wants in my life. It helps to calm it down and put everything in perspective."

Players' religion has never been much of a focal point in professional hockey, as the NHL is likely the most secular of the major professional sports.

Whereas some teams in the NFL form prayer circles after wins and athletes in other sports thank God after winning championships, the subject rarely comes up in the NHL, even though many prominent players such as Jarome Iginla, Shane Doan and Mike Fisher are devout Christians.

Making that shift from a deeply religious place like Morweena - two hours north of Winnipeg and home to roughly 130 people - can be difficult, but Reimer feels he has been able to maintain who he is while living on the outskirts of Toronto. ("I don't think I could live downtown," he said.)

He attends church regularly with his wife, April, and is kept grounded by those close to him.

Reimer's agent, Ray Petkau, has known the young goaltender since first playing with him in a church tournament 10 years ago. He doesn't feel stardom will ever change him.

"He's a throwback," Petkau said. "The smile on his face, it's so genuine. He just loves the game. You can't compare him to anybody. You don't see that kind of attitude anywhere. But he also had the confidence to know he was going to make it to the NHL, at least in some capacity. He's just said I'm going to do my best to be the best I can be."

Three months into his NHL career, Reimer has proven better than anyone expected.

After the win Saturday, he has a 20-8-4 record, 2.54 goals-against average and .922 save percentage, numbers that could get him consideration for the NHL's all-rookie team at the end of the season.

The talk now around the organization is that Reimer has already earned the Leafs' No. 1 role for next season and that general manager Brian Burke won't pursue a veteran netminder to push him for starts if Jonas Gustavsson is able to be a capable backup.

That's not something Reimer ever expected after coming into training camp fourth on the Leafs' depth chart and happy to be playing in the minor leagues.

"I'm blessed to be here," he said. "Blessed to be playing in the NHL. It's not because of me, that's for sure."

Leafs' playoff hopes have all but melted away
April 3, 2011 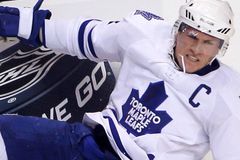