A few hours before being a healthy scratch for the second consecutive game, David Clarkson talked a lot about his benching being a message to the rest of the Toronto Maple Leafs.

The trouble is, the man with the big contract and little production does not seem himself to fully grasp the message coming from interim Leafs head coach Peter Horachek. Judging by Clarkson's animated conversation at centre ice Tuesday with Horachek during the Leafs' game-day skate (neither man would share the details), he fiercely disagrees with the coach's decision not to play him against the New York Rangers at the Air Canada Centre.

Afterwards, Clarkson gave the impression he feels Horachek is making him the whipping boy for the overall awfulness of the Maple Leafs, who have one win in their last 12 NHL games. It was as much as what the Leaf forward did not say as the little he actually said.

"It was obviously a message to the room," Clarkson said of his banishment to the press box, as if somehow the coaches randomly decided to punish him and then point to the rest of the players and say, "Shape up you louts and buffoons or it will be you next time."

At no point, despite several invitations to do so by his questioners in the Leaf dressing room, did Clarkson admit his own substandard play practically from the minute he arrived as a free agent in September, 2013 from the New Jersey Devils just might be playing a role in all of this. He wouldn't even admit the obvious, that he was heatedly telling Horachek in their centre-ice conversation that he deserved to play.

"Oh no, we were just talking," Clarkson said. "I've got a ton of respect for him, he's one of the nicest coaches I've played for. This is something where there was a message being sent and I'm sure everyone got the message. I'm not going to comment on ice time or what goes on."

Horachek was similarly reticent on the details but at least he made it clear Clarkson's excitement did not stem from a new restaurant he just discovered and needed to share with the coach.

"[The discussion is] a regular day-to-day occurrence," Horachek said and then pointed in the direction of his office. "It usually happens in here and you guys don't get to film it.

"[Clarkson is] fiery and I love that. I have a lot of respect for him. He's proud and a competitor. That's what we need more of."

But the coach also made it clear Clarkson's play is what drew him a seat in the press box: "We want more."

A lot more, Horachek could have said. Clarkson was signed for seven years and $36.75-million (all currency U.S.) in the summer of 2013 because his 30 goals in 2011-12, many of them on the power play, showed his willingness to crash the net and play hard along the boards, something the soft Leafs dearly needed. A lot of other teams thought so, too, something too many fans and media are forgetting these days, which is why Clarkson landed such a sweetheart, no-move contract. But his two-way game and scoring touch never made the transition to Toronto, his hometown, which is why the contract is now a millstone around the neck of Leafs general manager David Nonis.

In 113 games as a Maple Leaf, Clarkson, 30, has 15 goals and 11 assists. At an average of $5.2-million per year, those are pricey points. Not exactly the same return as buying Apple when it first went public, yet Clarkson cannot seem to make the connection with his absence from the lineup.

"It's something that's not fun but I've just got to go out there and work hard," he said. 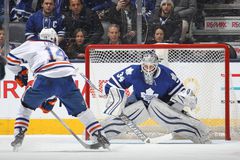 Maple Leafs’ Clarkson likely to be healthy scratch again versus Rangers
May 12, 2018 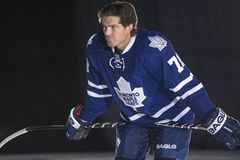