There were some positives the Toronto Maple Leafs could take out of Tuesday's 3-2 win over the Calgary Flames that broke their eight-game losing streak.

Secondary scoring, long one of this team's problems, finally showed up. Jay McClement, Dave Bolland and David Clarkson – yes, you read that right, David Clarkson – were the Leaf goal-scorers. Clarkson even provided the winning goal on breakaway, his fifth of the season, coming in at a little more than $1-million per, based on his contract.

The defensive game was a little better, as the Flames were limited to 24 shots, practically none by Leaf standards, while the Leafs took 22. Hey, you didn't think they would actually outshoot someone did you?

And the luck that deserted them since the Olympic break returned, at least for one night. Bolland's goal came on a shot almost from behind the net that hit Calgary defenceman T.J. Brodie and bounced in to put the Leafs ahead for good.

But, and there is always a but with this team, questions remain with the Leafs, as their chances of making the NHL playoffs are still almost nil. The biggest problem was the Flames game itself. For a group of players supposedly playing for their playoff lives the Leafs showed little passion and were fortunate the opposition was one of the NHL's worst teams.

In a game that was boring enough to make your eyes bleed, the Leafs still looked like a team playing not to lose rather than one going full out for the win. A couple of the players and head coach Randy Carlyle admitted as much while talking about how great it was to finally stop the string of regulation-time losses.

"You hope you can build on it," Carlyle said. "But I don't want to get too far ahead of ourselves because we didn't paint a Mona Lisa tonight."

No they didn't, not by a longshot. The building must happen, though, as the next opponent is the Boston Bruins on Thursday night. They look nothing like the team of a year ago, the one that stumbled through the last part of the 2012-13 regular season then almost let the Leafs push them out of the playoffs before righting themselves and running to the Stanley Cup final.

This year's edition of the Bruins is a ruthlessly efficient machine, cruising toward first place overall with a 9-0-1 record in their last 10 games. And they are not relaxing even though the Atlantic Division title is clinched and the Eastern Conference title is pretty much certain.

"We use it for support right now," Leafs captain Dion Phaneuf said of the win and then admitted, "there's still a lot of work to be done. We can't sit back and say 'Whew.'"

There are still too many signs the will and the confidence of this team remain fragile. The Leafs do not look like a team that has everyone pulling together and they have a long way to go to inspire any confidence.

Carlyle said that is still obvious when you see players do certain things even when the game has gone their way and is finally winding down.

"We need people to step up and we need people to shake the cobwebs or the doldrums which we've been in and get ourselves going," the coach said. "You see the things like [forward] Mason Raymond ice the puck when nobody's around him. He's trying so hard not to be the guy who's going to turn the puck over.

"Those are the signals you've got to maybe breathe a little bit deeper and try and [remain] calm."

In the last minute of the third period, the Leafs were hardly the picture of efficiency after the Flames pulled their goaltender for an extra skater. The familiar running around in their own end ensued, as did the questionable judgment.

But there was still some luck left over from the Bolland goal since Phaneuf managed to wait until there were just three seconds left before he took a bad cross-checking penalty in front of the Leaf net and then talked his way into an additional minor for unsportsmanlike conduct, a 10-minute misconduct and a game misconduct. 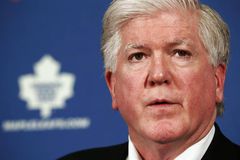 Kessel has bruised foot but is expected to play against Flames
April 1, 2014 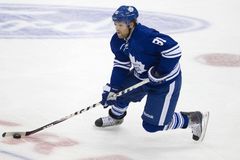 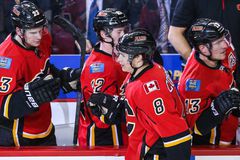 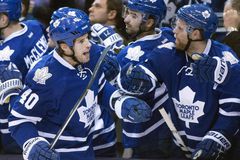