James Reimer isn't certain when it started or who got the movement going, but the Toronto Maple Leafs rookie netminder said he's more than happy to embrace his new nickname, Optimus Reim.

The handle is a play on Optimus Prime of the Transformers, and Reimer recently added a fan-designed logo based on the nickname to his mask as "a small celebration of his fantastic fans."

Reimer said today that he may go to a full "Optimus Reim" mask for next season.

"I saw the design everywhere and heard all the fans talking about it," Reimer said. "It's a fun thing to do with the fans. If that's what they know you by, I'll just put a little thing on my mask, and going forward, it might be a whole mask thing.

"Maybe for next year, if things go well and everything works out, we might try and come up with a nice, good-looking, creative mask. We'll see. Have to wait for next year for that."

The nickname has gained so much popularity that fans have been wearing Transformer masks to games and it has been getting mentions on television like this one from TSN's Jay Onrait.

Matt Likely, a Leafs fan from Halifax who runs puckinghilarious.com, came up with the Optimus Reim logo that is now on Reimer's mask and said he has sold hundreds of T-shirts with the design. No one knows who first came up with name, however, other than a group of Leafs fans on Twitter.

"I don't even know when I first heard about it," Reimer said. "Probably after the first maybe five, 10 games, I played. After the first month. I think my wife saw it on TV. And I heard it's on Twitter. She's on there and saw some of the fans talking about it, among other ones.

"I think it just kind of stuck. I think it's a pretty cool nickname. I'm sure that's why people caught on to it."

Reimer said he isn't a Transformers "groupie" but has seen the movies. He's uncertain how the nickname relates to his play in goal, but said he likes it the best out of the many that are now circulating online.

"That's a really good question," he said. "I don't even know [what it means] I don't know if it has anything to do with me as much as my name just fits in perfectly. I'm sure fans have their definitions for it.

"There's a whole bunch out there. Optimus Reim is the best one. Reim Time, Busta Reim, Reim Stoppers. I've never got anything like this until I came up [to the NHL] It's cool. We have a ton of fans and they're creative. It makes the game fun."

Likely offered a few theories on why "Optimus Reim" fits for the Leafs rookie, who has been one of the stories of the second half of the NHL season in going 18-8-4 with a 2.55 goals-against average and .922 save percentage since his first start on Jan. 1.

"I guess you could say Reimer has transformed the Leafs' subpar goaltending situation into something not just average, but pretty damn respectable," Likely said. "Optimus is also pretty close to 'optimism' and there's definitely a more optimistic outlook from the fans.

"I just love his play, demeanour and the fact that he and the fans have embraced the nickname and logo." 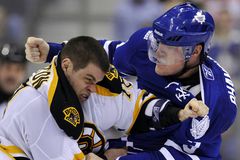 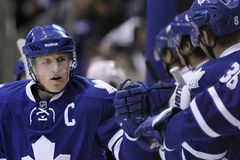 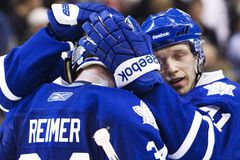 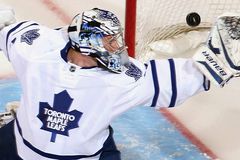 Reimer, Maple Leafs enjoying the ride
February 23, 2011
Follow James Mirtle on Twitter @mirtle
Report an error
Due to technical reasons, we have temporarily removed commenting from our articles. We hope to have this fixed soon. Thank you for your patience. If you are looking to give feedback on our new site, please send it along to feedback@globeandmail.com. If you want to write a letter to the editor, please forward to letters@globeandmail.com.
Comments