The NHL can be a rather odd entity at times.

One of those times came Tuesday when David Clarkson, who received a far more severe punishment than Phil Kessel did for their roles in a pre-season brawl, was in the Toronto Maple Leafs' lineup for a game against the Ottawa Senators while Kessel was not.

However, this time the logic of the NHL rules is understandable.

Clarkson's reprieve is only temporary and only the result of a technicality. After Tuesday's 3-2 pre-season loss to the Ottawa Senators, Clarkson broke three days of media silence to say he was very, very sorry about the whole thing but still thinks it was worth the punishment to, as he sees it, protect a teammate.

NHL rules call for an automatic 10-game suspension for anyone who leaves the players' bench, as Clarkson did last Sunday in a pre-season game against the Buffalo Sabres, to join an altercation on the ice. That suspension must be served during the regular season, so Clarkson was free to play in the Leafs' three remaining pre-season games while Kessel was not.

Kessel drew a suspension for those three pre-season games from NHL vice-president Brendan Shanahan on Tuesday for slashing Sabres enforcer John Scott with his stick. The trouble started when Sabres head coach Ron Rolston (who was fined by the NHL for this) sent Scott out for a faceoff against Kessel's line following a fight in which Sabres forward Corey Tropp was badly beaten by Leaf Jamie Devane.

Scott told Kessel he was going after him and Kessel responded by hacking at the 6-foot-8, 270-pounder with his stick. Clarkson jumped on the ice from the players' bench to join the ensuing brawl. Shanahan limited Kessel's suspension to the pre-season games because the Leaf star has never been subject to supplemental discipline before, Scott was not injured and Shanahan decided his initial slash on Scott's legs was in self-defence. But when Kessel returned for another whack at Scott after he was out of danger, that drew the sanction.

Clarkson ran afoul of a rule that is intended to make the game safer for players. When players jump on the ice to join fights, the situation can escalate quickly and so can the chance for injury. It doesn't matter that Clarkson arrived too late to do much to Scott other than tug on his sweater. He should have been aware of the rule and its consequences.

The media silence from Clarkson was because he was discussing a possible appeal of the suspension with the NHL Players' Association. Considering the rule about leaving the players' bench is clear, there were little grounds for an appeal and Clarkson said he will take his punishment. He's sorry he hurt his team but not sorry for coming to Kessel's aid.

"I'm a grown man. I'm going to take this for what I did. Be accountable," Clarkson said. "I'll say sorry to the fans or anybody who is disappointed. My teammates in here are what's first to me. That's what's got me to where I am in my career. That's why I believe I'm here. That's the person I am. If anyone was in trouble, I would try to go to help. That is what I did.

The view from the Leafs dressing room is that Scott should have drawn something for going after a smaller, skilled player who is not versed in the peculiar art of hockey fighting.

"You don't expect one of the toughest, biggest guys in the NHL to do something like that," Leafs forward Joffrey Lupul said. "I've never seen that. It's pretty embarrassing for [Scott]. I'm sure he doesn't feel well about it now.

"It's like Phil could not possibly fight him and get away without being hurt. What you going to do? You're going to whack him with your stick. I think it was a whack in the shinpads, a hard whack. But it could have been a lot higher. A lot of guys in the league, if Scott went after them like that, he could be missing his top row of teeth."

Shortly after Shanahan made his ruling, there was a large segment of the hockey community who said Kessel was given a holiday not a punishment. After all, few NHL veterans relish playing in pre-season games.

However, Shanahan made a point, even if it looks funny because Clarkson is playing this week while Kessel isn't and then will sit for almost a month.

First, Kessel was given notice his actions crossed the line. Second, he is now officially on the list of those who received supplemental discipline. If there are any further incidents, Kessel will be considered a repeat offender, which subjects him to harsher punishment, which means he has to be careful. 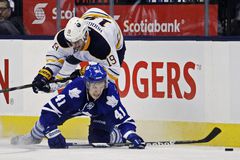 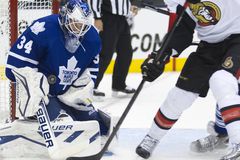 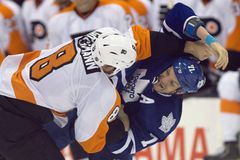 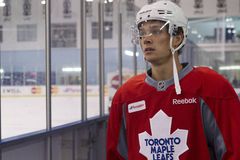 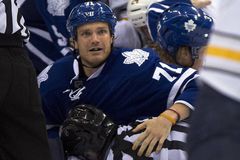 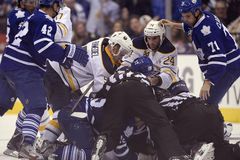 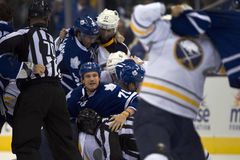