Two wins in regulation and they're basically in.

The Toronto Maple Leafs back-to-back series with the New York Rangers starting Monday night at the Air Canada Centre comes at a pretty interesting time. Both teams are in playoff position, just four points apart, with little locked up with 10 games to play.

There's a four-point swing potentially in play that could be pretty dramatic, with the Leafs either (a) moving eight points up and essentially putting New York permanently in their rear view mirror or (b) falling back into a tie and left with a dogfight the rest of the way.

It appears at this point the Leafs will make the postseason for the first time in nearly a decade, as 52 points should be enough and they'll need only a 3-7-0 or 2-6-2 finish to get there and they also hold the main tiebreaker (regulation or overtime wins).

But the Rangers are hot (3-0-1 in their last four) and two consecutive, decisive losses would make things a lot more dicey for Toronto.

"You want to be able to come in and set the tone," Leafs defenceman Mark Fraser said of the series. "Being able to show them that it's not only the three hard periods you have to fight against us, it's six.

And maybe trying to push them out as soon as we can.

"We don't want to be a .500 club the rest of the way going in. Every game we're approaching as a playoff game."

Other than laying an egg against the Philadelphia Flyers last week, the Leafs have been pulling a lot of points out of games, going 6-1-3 in their last 10 going back to a 3-1 loss to the Pittsburgh Penguins in mid-March.

Their only other meeting with the Rangers, however, was a lopsided 5-2 loss way back in late January, a game in which they were outshot 42-17, hemmed in their own zone and blew an early two-goal lead.

"I think that game's really forgotten about," Nazem Kadri said. "That was one of our weaker points of the year, and it was our sixth or seventh game. I think both teams have drastically changed since then."

- Monday was an optional morning skate for Toronto so a lot of the lineup isn't known. Carlyle did confirm that Ryan O'Byrne will make his Leafs debut on the back end, which likely means Jake Gardiner comes out. "There's some areas that we think, again, that he can improve," Carlyle said. "I don't think we can sit here and say Jake's playing at the top of his game because he's not."

- James Reimer is expected to make his 10th start in the last 11 games as he continues to take hold of the No. 1 role. He gets the nod against Vezina candidate Henrik Lundqvist, who had some nice things to say about the young Leafs goalie after the morning skate.

- The forward group, meanwhile, looks like it'll include the two tough guys (Frazer McLaren and Colton Orr) but, again, nothing set in stone.

It feels like the Leafs believe they were pushed around last time against the Rangers, however.

- Injured Leafs winger Joffrey Lupul (head) skated on his own and with teammates for a few minutes before leaving the ice on Monday, but the only update from Carlyle was that he remained day-to-day. "He's just feeling his way through," Carlyle said. "He's been cleared to skate so I don't know what more I can give you." 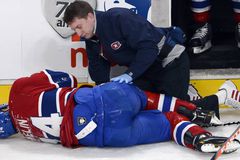 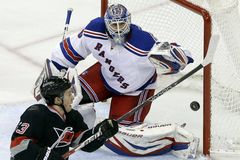 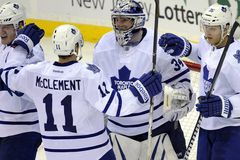