The book is apparently out on James Reimer.

Tampa Bay Lightning head coach Guy Boucher said his staff heavily scouted the Leafs rookie netminder heading into Monday's night's game, which went onto become a 6-2 loss and one of Reimer's worst outings on the year.

The fear now is that more teams follow suit.

"We were having problems scoring goals so we put a lot of emphasis on offence," Boucher said after the game. "We saw a lot of things [with Reimer] but we're not going to share that. We worked really hard on that."

That work certainly paid off, as Reimer was the game's goat in a loss that severely hinders Toronto's playoff chances, allowing five goals on 29 shots, many of which were aimed high at his glove or blocker.

The Lightning's scorers weren't the usual suspects, either, as other than Vinny Lecavalier, who had his 18th late in the second to make it 4-2, it was all depth players providing the offence.

"We knew he was having a good year, and he's a tough goalie to beat," Boucher said. "We thought that he would make a difference in the game. The players really bought into what we were trying to do."

Leafs coach Ron Wilson disagreed that teams had begun to solve Reimer, despite the fact his numbers have fallen considerably the past few weeks.

"I think he looked tired," Wilson said. "Buffalo wasn't on to him [in Saturday's 4-3 win over the Sabres]and they've seen him a couple times and Tampa suddenly got onto him?

"We didn't stop their forwards from getting to the front of the net so they had crowded situations. We didn't box out very well and made it hard on Reims."

After a terrific 9-4-2 record with a 2.13 goals-against average and .934 save percentage to start his career, Reimer's statistics are well down in his past 10 starts, with a 3.59 goals against, .895 save percentage and only four wins.

Shooters have exposed at least one weakness - an often low and slow glove hand - and it'll be up to the youngster to adapt as quickly as he can.

Likely more so for next year and beyond than anything else.

"I don't know," Reimer said when asked if he has to adjust his game. "Obviously I've been thinking about it for the last 11 minutes of the game [after he was pulled] But I don't know. I feel like I'm doing what I did a couple games ago and pucks just aren't hitting me.

"I'll look over the game tape and see if I see anything, and if I do, I'll work on it."

Reimer struggled, but the loss certainly wasn't all on him.

The Leafs were again out shot on home ice - including 13-7 in the first period - marking the sixth time in their past seven games that that's been the case.

Toronto also had several turnovers that ended up in the back of their net.

Winger Mike Brown had the first, failing to dump the puck in deep while the Leafs went on a line change, and the resulting odd-man rush turned into centre Nate Thompson's 1-0 goal.

There were plenty of minuses to go around on the rest of the roster, too, with Tyler Bozak and Joffrey Lupul both minus-3 after 40 minutes and little-used defenceman Brett Lebda essentially playing his way out of the lineup with a minus-2.

"We've got to be better at this point in the season," Bozak said. "Right now we've got to win every game we can."

The Leafs are getting some help on the back end in call-up Matt Lashoff, who is expected to clear re-entry waivers Tuesday at noon, but it'll likely be too little, too late.

"We're going to have to find a way to regroup and bounce back," Wilson said. "We need to get more minutes out of our fifth and sixth defencemen, quality minutes, so the top four that we've been using don't poop out."

Armstrong out for season

More bad news came on the injury front, as Leafs winger Colby Armstrong broke his foot while blocking a shot in the second period and is expected to miss the rest of the season.

"He's played really well for us," Wilson said. "All you have to do is look at our record when he's in the lineup to understand that."

The Leafs are 25-19-6 when Armstrong is dressed this season, with almost half of his offensive production coming since the all-star break.

In terms of bright spots, there were few in this one for Toronto, although Nikolai Kulemin's second-period goal was worth noting.

With the Leafs down 3-1, Kulemin blocked a shot in his own end, took the resulting bounce off his leg and converted on the resulting odd-man rush for his 26th goal of the year.

The Toronto comeback was short-lived, however, as Lecavalier scored four minutes later.

Dion Phaneuf had the Leafs' only other goal, while the Lightning's Mattias Ritola scored twice in the second and Dominic Moore and Mike Lundin closed out the rout in the third.

Wilson called Monday's matchup "a game we have to win" in the hours leading up to the game, a description that sounds about right given the dire situation the loss leaves their playoff hopes in.

Six points back of the Sabres and New York Rangers in seventh and eighth in the Eastern Conference, Toronto now needs a 10-2-0 finish the rest of the way to get to the 90-point mark.

Getting in with less than that is possible, but not likely, as it will rest on the Sabres and/or Rangers struggling down the stretch.

Making the tall task even more difficult is the fact the Leafs have just four home dates left, all of which are against teams currently in the top seven in the East.

Wilson said he will give Reimer a break later this week when his team heads on the road, giving backup Jean-Sebastien Giguere a start against either the Carolina Hurricanes on Wednesday or Florida Panthers on Thursday.

"I may start Giggy in Carolina just so that Reims can take a breath here," Wilson said. "And you know get Giggy in. You don't want him sitting around too much."

Even if the postseason is too long of a shot at this point, Toronto still wants to close the year strong, as there are two teams on their heels and a lapse could see them fall to 25th or 26th overall.

The Boston Bruins, after all, still have the Leafs' first-round pick, which looks like it could be anywhere from fifth to 10th overall - before the lottery - should Toronto miss the playoffs. 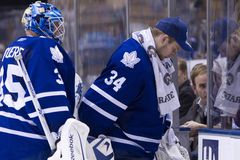 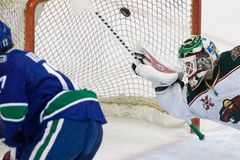 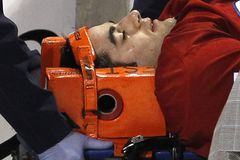 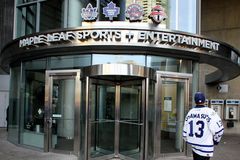 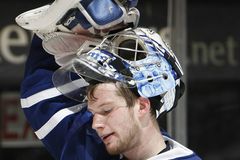 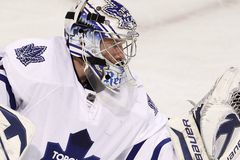 Reimer, Maple Leafs enjoying the ride
February 23, 2011
Follow James Mirtle on Twitter @mirtle
Report an error Editorial code of conduct
Due to technical reasons, we have temporarily removed commenting from our articles. We hope to have this fixed soon. Thank you for your patience. If you are looking to give feedback on our new site, please send it along to feedback@globeandmail.com. If you want to write a letter to the editor, please forward to letters@globeandmail.com.
Comments