The Toronto Maple Leafs are coming off a two-game stretch against the Boston Bruins in which they pulled out three of four points, a badly needed boost to keep them in solid playoff position with 15 games to go.

It was hard not to notice, however, who they weren't getting contributions from, especially when coach Randy Carlyle stapled a few of his top offensive players to the bench.

James van Riemsdyk, in particular, must have had a few splinters.

Consider these players' ice time in the 25 minutes of the third period and overtime in Monday's 3-2 shootout loss:

Nominally, those are the Leafs first and second lines, but the Nazem Kadri unit clearly was favoured by Carlyle late in the game and with good reason.

With van Riemsdyk having much less of an impact of late, the "top" unit has been having problems in its own end, something the coach said was showing up in their scoring chance counts.

"So those are things that go on on a day-to-day basis and you do an evaluation after one game, two games, three games. You always call back on those markers for your coaching staff and for your group. You bring those out and you talk about it and make a plan and go forward."

Most coaching staffs around the NHL keep scoring chance plus-minus type statistics and don't ever reveal them publicly, but even based on the available analytics out there, the first line have been having some long-standing issues staying on the right side of the puck.

As a team, the Leafs are being outshot about 33 to 27 at even strength, numbers that are made slightly better overall by the fact they are on the power play more than shorthanded (and have been killing penalties well).

But it's that first line that's causing a lot of the possession problems at even strength, which is essentially what Carlyle's pointing to in referencing the scoring chance data.

This isn't really a new issue for Toronto, either, as the Bozak-Kessel duo has never been very adept defensively, despite the fact Mikhail Grabovski has been charged with facing teams' top offensive threats most of this season.

You don't even need to look beyond traditional statistics to see the impact this is having. Since the line was minus-4 in a dreadful game against Montreal, Bozak and Kessel are minus-11 and JVR is minus-9 in the 13 games.

Now, plus-minus has huge issues given it is so goaltending dependent, but combined with the shots and missed shots data, it's clear they're in the red in many different departments.

Van Riemsdyk was getting a lot of the attention at Tuesday's morning skate given he was benched most significantly on Monday, but this is a problem with the entire unit and a sign that it could use a new look.

"He's been a good player for us," Carlyle said. "He's got 14 goals. So it's not like we're jumping on the guy. We're just asking that, there's been a dry spell, and people have to make adjustments."

- Tuesday was an optional skate as part of the back to back so lineup news is scarce. James Reimer skated for an awfully long time though and Ben Scrivens was absent which usually indicates Scrivens gets the start. Probably wise given how heavy the Leafs schedule is this week.

- Jacob Markstrom starts for the Panthers, and the youngster has been playing well of late. Florida has a remarkably good record against the Leafs, too, going 13-4-3 in their last 20 games. Keep that in mind (as well as the fact this will be a tired Toronto team) before writing off the last place Panthers.

- John-Michael Liles skated on his sprained ankle and appears to be progressing nicely as he was able to stop and start fairly normally. He may not miss as much time as originally feared.

- News doesn't appear as promising on Leo Komarov, who is on injured reserve for at least another week with an upper body injury. Doesn't sound close.

- As for sitting out Matt Frattin, Carlyle said on Tuesday it was mainly because he's not an option on the penalty kill and newcomer Ryan Hamilton is. (No word on why the Leafs need two enforcers on one line, but that's another story for another day.)

Wounded Panthers in Toronto to face Maple Leafs
May 11, 2018 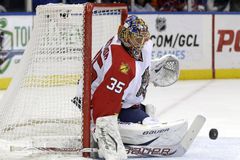 Dowbiggin: Leafs finally moving near the head of the class
May 11, 2018 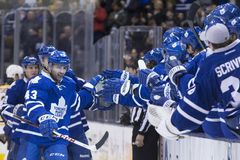 Is Kadri the Maple Leafs long-awaited answer at centre?
May 11, 2018 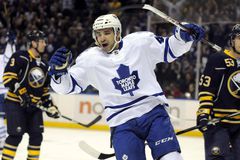