His production is down from where it normally is, and when you make $5.5-million a season in Toronto, that's going to raise a few eyebrows.

After back-to-back seasons with more than 20 goals and 50 points, Mikhail Grabovski has only six points after 14 games.

And he realizes he has more to give.

"Probably, yes," he said on Friday after practice, with his team preparing to face the Ottawa Senators on Saturday at home. "But I do what I can do. I know I need to get better a little bit and I know people want me to make points. You know it's coming."

Grabovski is in an interesting situation with the Leafs this season, however, as his role has really changed from a year ago to being much more about his play in his own end.

With Nazem Kadri making the team as one of Toronto's top three centres out of training camp, the youngster and Tyler Bozak are both playing on lines coach Randy Carlyle wants to give mostly offensive minutes to while simultaneously sheltering them from top opposition.

That leaves Grabovski (who almost always plays with winger Nikolai Kulemin) as the team's go-to defensive centre, albeit an undersized one.

There are a pile of new advanced statistics now out there in hockey that are used to measure things on the defensive side of the puck, and a close examination of them shows just how much more difficult Grabovski's role is than a year ago.

There's even an argument to be made that Grabovski is this team's version of Sammy Pahlsson, the defensive stalwart Carlyle leaned so heavily on when the Anaheim Ducks won the Stanley Cup in 2007.

Here's a comparison of Grabovski both to his numbers last season and to Pahlsson in his last two years in Anaheim using three of these advanced statistics (which I'll explain in a little more detail below): quality of competition, Corsi and zone start.

More is available on these statistics at behindthenet.ca, but the basics are that QOC measures the quality of opponents players are facing, Corsi REL measures possession (by counting shots attempts for and against) and zone start measures which zone, offensive or defensive, players are starting on the ice.

One of the key ways of spotting a player that a coach is using in a very defensive role in the NHL these days is that zone start figure, and Grabovski's 32.9 per cent puts him in more defensive situations at even strength than most centres in the league.

Of the 318 forwards that have played 10 games or more this season in the NHL, Grabovski and Kulemin rank 298th and 299th in the category, putting them ahead of only strict checkers like Vernon Fiddler, Maxim Lapierre, BJ Crombeen and Paul Gaustad.

And Gaustad is the only centre in the league that has been on the ice for more defensive zone draws at even strength than Grabovski.

Grabovski's role, in other words, has shifted pretty dramatically from what it was a year ago, when he was more of a two-way centre relied on for goals and assists. The calibre of players he's facing is higher, the defensive zone faceoffs he's taking are much more frequent and his possession numbers are much worse – even if in context they're still solid.

Add in the fact that (a) Carlyle is usually playing those two forwards with two checkers in Jay McClement or Leo Komarov and (b) Grabovski is 10th among regulars on the team in power-play minutes per game, and it shouldn't be a surprise his point totals aren't great.

(Mike Fisher in Nashville is the only other player playing a similar number of even strength minutes in a similar role, and his offensive production isn't great either.)

Carlyle has been asked about this a couple times this year but doesn't appear to be a fan of detailing exactly how players' roles are affecting their production.

To him they're all assets he can use to try and win games.

"We understand at times there's more of an assignment given to him to play against top players," Carlyle said. "But in some of the performances, and last night [in an ugly 3-1 loss to the Carolina Hurricanes] specifically, I think our group could be a lot harder to play against."

"It's exciting for me playing against the best lines," Grabovski said of the change. "Sometimes it's pretty hard. You don't have any chances sometimes; they have lots of chances against. I look forward to and enjoy it... Of course it's a challenge. I try and do my best."

Grabovski was then asked if he takes his heavier defensive role this season as a sign that the Leafs management and coaching staff are happy with his play.

"Yeah, probably that's right," he said. "But I don't know. It's just the system. But it's worked. Right now it's kind of working so I'm happy for my team because we make the plans and we win the games. The whole team has one plan. We need to make playoffs. Everybody's given a different chance to play."

If you look beyond the offence, there are signs Grabovski's brought some value to the role. The Leafs goals against is down significantly and their defensive play, save for some of the uglier losses like Thursday night's, appears to have improved.

Where he's not a great matchup is against a team like Carolina, which has two huge centres who can dominate a smaller, finesse player like Grabovski.

The only alternative for Carlyle would be to build another checking line, perhaps as his fourth unit, that could take off some of the load when it comes to defensive assignments. As it currently stands, any line with Colton Orr and/or Frazer McLaren on it is getting the easiest minutes possible for the Leafs.

Another solution would be to replace Bozak or Kadri with a centre better able to play at both ends of the ice, which is why names like Colorado Avalanche holdout Ryan O'Reilly are coming up in this market.

Barring either of those changes, Grabovski and Kulemin can't be expected to produce offensively the way they have in the past.

Even if, as Grabovski revealed in one of his many quirky comments to the media, their on- and off-ice relationship remains strong.

"I like playing with him," he said of Kulemin. "Always he's supporting me and I think I help him, too, a little bit. I don't know what I can do without him. He's my second wife." 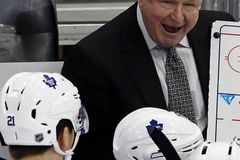 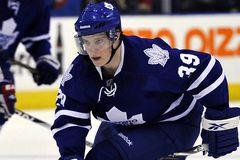 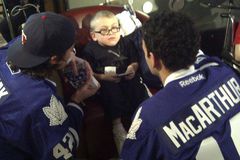 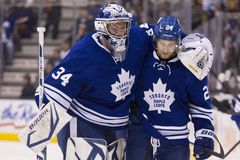