The San Jose Sharks had just pounded the Toronto Maple Leafs 6-2 and dramatically controlled the flow of the game, something players referred to again and again in their postgame comments.

"We were all over them," the Sharks defenceman said on Tuesday night. "All game. We didn't give them much. They played last night and we wanted to jump all over them. I thought we played 60 minutes for the most part. We were just all over them."

The table had been set for a blowout given the powerhouse Sharks were at home and had two days off as they awaited another Eastern Conference opponent, a conference they had dominated to the tune of a 17-6-3 record coming in.

The Leafs had played well and won a night earlier in Anaheim and looked every bit the tired team against what is yet again a Stanley Cup contender.

Stylistically, the two teams also couldn't be more different, with San Jose's puck possession mantra helping them to the league's top shot differential at more than seven per game.

Toronto has lagged in the bottom of the league for the last two seasons in that department, allowing eight more per game than it has generated.

The most curious thing about Tuesday's game, however, was that the momentum never changed. Typically, the shot clock follows the score in some respects, with the leading team letting off the gas and what's called score effects taking over and making the totals more respectable.

That's why you see many teams lose games where they're on the right side of the shot count; many of the shots they get come when they're already down by two or three goals.

That's what happened in Anaheim, when the Leafs raced out to a 3-0 lead and then sat back, getting hemmed in their own zone and outshot 35-12 in the final 40 minutes.

The opposite happened against the Sharks, as they never let up, even at 5-1 early in the third period. Wave after wave of forwards continued forechecking hard and forced the Leafs to simply dump the puck out when they wanted a change.

In the end, it was one of the most lopsided games (statistically speaking) in the league this season.

One of the main ways that the balance of play is measured in the NHL these days is by looking not just at shot counts, but shot attempts, as the team with more shot attempts at even strength (or Corsi) typically spends more time in the offensive zone.

It's a good proxy for puck possession and offensive zone time, and it paints a particularly ugly picture of Tuesday's game.

At the individual game level, having 55 per cent of the shot attempts is considered a good performance, while anything over 60 per cent is dominant.

Good goaltending can overcome low possession percentages, but for the most part, good possession teams like the Sharks win a lot of games.

Against the Leafs, San Jose held a 77-27 advantage at even strength, good for a 74 per cent Corsi rating that is the third highest out of nearly 1,000 games played in the league this season.

The most lopsided game this season by this measure was the Columbus Blue Jackets against the Buffalo Sabres (84-25 shot attempts or 77.1 per cent) in late January, a game dominated by Columbus territorially but actually won by Buffalo on the basis of two shorthanded goals and great goaltending by Ryan Miller.

The second most lopsided was the Los Angeles Kings 2-1 win over the Edmonton Oilers (63-21 or 75 per cent) back in October when things were particularly ugly for coach Dallas Eakins and company.

But games that look like Tuesday's are incredibly rare. Only 13 of the 984 games played so far have involved shot attempt counts at a 70-30 or greater split.

According to extraskater.com, in the last three years combined, only seven games have been more lopsided Corsi-wise than San Jose's 74 per cent edge against the Leafs.

"When the game started to tilt in their favour, we really never got a chance to get it back," Leafs coach Randy Carlyle said.

Mirtle: Relying on skill over size has Leafs back to winning ways
March 10, 2014 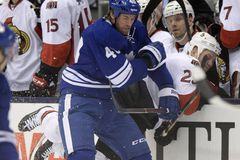 Mirtle: Leafs mettle to be tested on California trek
March 9, 2014 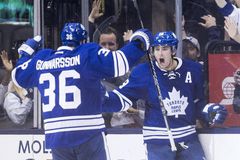 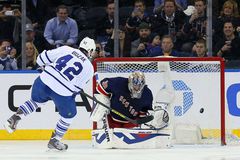 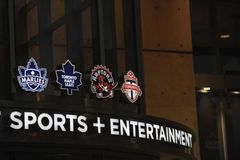