Of all the areas for the Toronto Maple Leafs to improve on this off-season, goaltending seemed a curious one to be at the top of the list.

But GM Dave Nonis has pursued an upgrade at the position from Day 1 since taking over in January, and on Sunday morning, he finally got his man.

And, next season, that will make for a heated battle in the Leafs crease.

Bernier has little NHL experience – just 62 games spread over five seasons – but brings one of the better pedigrees in the game as an 11th overall pick (2006) from a successful organization. Bernier was was also the AHL's goaltender of the year three years ago.

Now he'll be charged with challenging incumbent Leafs No. 1 James Reimer for his job after a season in which the 25-year-old was the main reason Toronto returned to the postseason after nine years away.

"When I talked to Jonathan, I told him the same thing I passed along to Reims," Nonis said early Sunday evening, several hours after making the deal. "Which is 'nothing is being guaranteed to anybody.' "This is a situation where we feel that we're deeper [in goal]. Both have great potential and they're going to get an opportunity to develop and hopefully realize that potential."

Statistically speaking, the Leafs are coming off one of their most successful seasons between the pipes in ages, as Reimer and Scrivens combined to post a .917 save percentage that was tied for the seventh best mark in the league.

Bernier has only a .912 save percentage in his limited NHL action but was a star in the minors for two seasons and saw limited action mainly because he was trapped behind one of the best goalies in the game in Jonathan Quick.

Projecting how good young netminders will be over the long haul is one of the most difficult things an NHL GM is charged with, as many fail to live up to their promise.

Bernier, however, was pursued by more than half of the teams in the NHL over the past six months, including the Leafs, who had a trade similar to the one completed on Sunday on the table as far back as the start of the season.

"We had talked on and off again for months," Nonis said. "Most of this deal was in place months ago. We just had to find a time that was right for both sides."

"All the teams in the mix were great teams, but I have to tell you I'm so happy that it's Toronto," Bernier told ESPN.com after learning he was heading closer to his hometown of Laval, Que.

The assets Nonis gave up for Bernier are far from inconsequential, too, as Frattin could well emerge into a 20-goal scorer – he had 15 in 82 games with the Leafs – and Scrivens had been one of the AHL's top goaltenders in his time with the Toronto Marlies.

The Leafs project Bernier's ceiling to be higher, however, which is why they pulled the trigger on the deal.

"Goalies are hard to move," Kings GM Dean Lombardi lamented to the Los Angeles Times, referencing the year-long process of moving Bernier for something tangible in return. "They're really hard to move. You're never going to get total value, but you try to get the best you can."

One thing the trade did do for Lombardi is give him some more wiggle room under the cap.

The Leafs agreed to retain $500,000 in salary in the deal, meaning the Kings will get both Frattin and Scrivens for a relative pittance – a combined $1-million under the cap – next year.

Toronto's cap situation, meanwhile, will be a bit more tenuous once Bernier – a restricted free agent – gets a new contract in the $2-million a season range. After signing all of the Leafs key RFAs, Nonis may be working with only about $10-million for another four or five bodies.

"We're a little tighter than we were 12 hours ago, but I think at the end of the day we'll be fine," Nonis said of his cap situation, which is complicated by the fact the Leafs will have just 11 players under contract after defenceman Mike Komisarek is bought out later this week.

Nonis also vowed that the Leafs will be busy in the coming days, saying he expects to make a couple more moves before free agency opens on July 5.

Toronto's biggest needs are obvious – they need help down the middle and in the top four on the blueline – but adding in those areas is never easy, especially with the cap declining by nearly 10 per cent.

The only place the Leafs really are set is in goal, even though there's an argument to be made that was the case prior to landing Bernier, too.

Now, the two young goaltenders – one old and one new – will be expected to push one another and continue the organization's newfound success in the crease.

"This shouldn't be looked as a knock on James at all because it's not," Nonis said of adding another netminder. "I believe that when you have someone pushing you, you get the most out of yourself. And I think that's the situation here where these guys can push each other and we're going to see some good goaltending because of it."

– More from Nonis on Sunday's trade:

"We feel we've got two of the top young goaltenders in the league right now. Both of them we feel have the potential to be solid No. 1s. In terms of games played, the one thing that you can say about Jonathan Bernier is he played behind arguably the top goaltender in the league today. That's going to hamper your development or the number of games you're going to play no matter how you look at it. From an experience standpoint we don't still have the guy with seven or eight years, but we do have James, who's started and played some important games now in the postseason. Jonathan Bernier played very, very well this year when his team needed him to play well. He's been through the Stanley Cup playoffs and he's seen and been around players who have won the Cup. So we think it's a pretty good pair."

"He's still young and I still think he's got a long way to go in terms of development. A lot of goalies continue to get better well into their late 20's and early 30's. I think that's something that we can expect from him as well. The people that have been around him and again I've been around him for a short period of time, but you talk to the people in Los Angeles and players that have played with him, he's an extremely hard-working young man. He's very determined. He has a pedigree of success. He's played well in games he's played in Los Angeles. His numbers this year were excellent. There's always a gamble when you're taking a young player. But we felt that the gamble was worth taking with the upside that we think that Jonathan has."

"We have some players that have pushed hard and have played well with the Marlies and will be given every opportunity to take a job at camp and I wouldn't rule out more roster moves with respect to trades and free agency. We're going to be active. But again we have to make sure we're spending the money wisely in order to keep this moving forward and give our young players an opportunity. I think between now and July 5 you'll probably see a couple more moves from us. We're going to work hard to do that anyway between now and then."

"I know there's been some talk about bringing a veteran [goalie like Luongo] in; I openly talked about it at the deadline. If there was a veteran that we felt was going to be able to help us and that was available at the right price and the right term we would have considered it as well. But this one here [with Bernier] in terms of the age group and potential was one that we felt was a better situation for us." 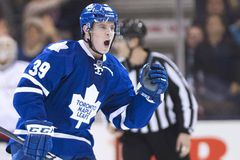 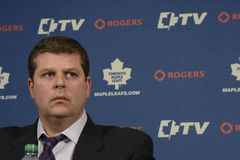 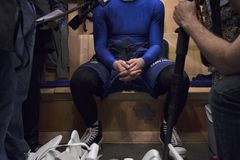 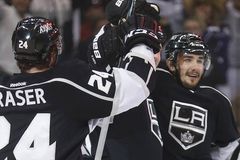